From the UNIVERSITY OF KANSAS, and the “department of creative doom labels” comes this fine example of Tabloid Climatology™ that is totally busted, if you just check a little history.

LAWRENCE — One consequence of global climate change is the likelihood of more extreme seesawing between drought and flood, a phenomenon dubbed “weather whiplash.”

Now, researchers at the University of Kansas have published findings in the journal Biogeochemistry showing weather whiplash in the American Midwest’s agricultural regions will drive the deterioration of water quality, forcing municipalities to seek costly remedies to provide safe drinking water to residents.

“As rainfall patterns change with climate change, it’s predicted there will be more times of drought, and more times of excessive rainfall — really big storms,” said Terry Loecke, assistant professor of environmental studies at the University of Kansas and lead author of the new investigation.

Loecke and co-author Amy Burgin, associate professor of environmental studies, said the extreme flux between drought and rainfall changes the storage of nutrients in the agricultural landscape — nitrogen used in fertilizing farms most importantly.

“Farmers put on their normal amount of fertilizer, but when we have a drought, plants don’t grow as big and don’t take up as much nitrogen,” Loecke said. “Instead of going into the plants, which would be harvested, it stays in the soil — and no water is flushing it away.”

But when floods occur, nitrogen is washed into surface waters such as tributaries that feed into rivers.

“The soil is like a sponge, and when it’s dry the nitrogen stays put,” Burgin said. “But as soon as you wet it, like when you wring a sponge, the nitrogen can flood into the rivers.”

Because many of these rivers supply drinking water for communities throughout middle America, remediating high loads of nitrogen will stress taxpayers as water departments are forced to build new facilities to eliminate nitrogen from municipal water supplies.

The team took a close look at a 2012-2013 drought and flood cycle that affected much of the Midwestern U.S., leading to a nitrogen spike in surface waters.

“We looked at observations of the 2012 drought that ended in a flood and asked how frequently that has occurred across upper Midwest across in the last 10-15 years,” Loecke said. “We found that the connection between drought-to-flood conditions and high nitrate was pretty common.”

Indeed, skyrocketing nitrate levels in the Des Moines and Raccoon rivers forced the Des Moines Water Works to construct a $4.1 million nitrate removal plant that costs $7,000 per day to operate.

“The drinking water is a real problem, especially in Des Moines,” Burgin said. “It has one of most expensive nitrate-removal facilities that we know about. In recent years, they’ve been running it from 25 to 150-plus days each year. That’s really adding up, because the money isn’t in the budget they have to spend to get clean drinking water to citizens.”

According to Loecke and Burgin, who both also serve as scientists with the Kansas Biological Survey, surface-water nitrate spikes like the ones plaguing Iowa will occur more widely throughout the agricultural Midwest as weather whiplash becomes more commonplace in the region.

“The average person will pay more to have clean drinking water, like in the city of Des Moines,” Loecke said. “A city can’t predict how many days they’ll have to run a nitrate-removal facility. When they run it a lot, it’s a huge hit to their budget, and they have to pass it on to their citizens, and it will spread out to rest of the Midwest. Midwesterners will have to pay more for drinking water going forward.”

Loecke and Burgin said they hoped their research could help inform farmers, policymakers, water departments and the general public.

“Municipal water services should be paying attention,” Burgin said. “Iowa is the bull’s-eye of this problem, and it’s going to spread out from there — this might not be at the forefront of a lot of Kansas minds right now. But given it’s an agricultural state, it’s a matter of time before we’re in same boat. In Iowa, now it’s hitting smaller municipalities. According to analysis by the Des Moines Register, 30 percent of them will have this problem — and most don’t have the tax bases to support huge nitrate-removal facilities.”

Excess nitrogen (N) impairs inland water quality and creates hypoxia in coastal ecosystems. Agriculture is the primary source of N; agricultural management and hydrology together control aquatic ecosystem N loading. Future N loading will be determined by how agriculture and hydrology intersect with climate change, yet the interactions between changing climate and water quality remain poorly understood. Here, we show that changing precipitation patterns, resulting from climate change, interact with agricultural land use to deteriorate water quality. We focus on the 2012–2013 Midwestern U.S. drought as a “natural experiment”. The transition from drought conditions in 2012 to a wet spring in 2013 was abrupt; the media dubbed this “weather whiplash”. We use recent (2010–2015) and historical data (1950–2015) to connect weather whiplash (drought-to-flood transitions) to increases in riverine N loads and concentrations. The drought likely created highly N-enriched soils; this excess N mobilized during heavy spring rains (2013), resulting in a 34% increase (10.5 vs. 7.8 mg N L−1) in the flow-weighted mean annual nitrate concentration compared to recent years. Furthermore, we show that climate change will likely intensify weather whiplash. Increased weather whiplash will, in part, increase the frequency of riverine N exceeding E.P.A. drinking water standards. Thus, our observations suggest increased climatic variation will amplify negative trends in water quality in a region already grappling with severe impairments.

This is nothing more than one of the worst examples Tabloid Climatology.

For example, USGS reports that this drought-flood cycle has been going on in Kansas as long as there were humans around to record it. In the paper done by KU researchers, the oldest data they appear to consider is from 1970 onward, while focusing on a single regional weather pattern event in 2012-2013.

“We looked at observations of the 2012 drought that ended in a flood and asked how frequently that has occurred across upper Midwest across in the last 10-15 years,” Loecke said. “We found that the connection between drought-to-flood conditions and high nitrate was pretty common.”

Well, duh, you could learn this was pretty common just by looking at climate history. It took me less than 5 minutes to locate this reference, but these KU researches didn’t do the same due-diligence. Bold mine.

Located in the central plains, Kansas is affected by the same weather patterns that affect adjoining States. These patterns are dominated by major weather systems that move from west to east across the State. The flow of moisture is seasonal. During winter, moisture originates over the Pacific Ocean and precipitates over the Rocky Mountains; the remaining moisture moves into the State from the northwest and west. Kansas tends to receive less precipitation during winter than summer. During summer, southerly winds move moisture originating over the Gulf of Mexico into the State. Occasionally, remnants of tropical cyclones, including hurricanes originating in the Gulf, move into the State and produce considerable quantities of precipitation.

The nature of these moisture-delivery systems results in numerous, severe floods and long, severe droughts. Since the flood of 1844, the most severe and widespread flood was in July 1951. The 1951 flood, which affected almost one-half of the State, resulted from an intense storm in early July that was preceded by greater than normal rainfall during May and June. Peak discharges in the Kansas, Marais des Cygnes, and Neosho Rivers generally had recurrence intervals greater than 100 years, were greater than any previous discharges, and have not been equaled since. Other significant floods occurred on the Republican River in 1935, the Arkansas River in 1965, the Solomon River in 1973, and the Verdigris River basin in 1976. Although the storm near Great Bend in 1981 did not affect a large area, its intensity caused severe flooding and considerable damage.

Five severe droughts-determined by analysis of streamflow data-have occurred in Kansas since 1900. All affected the entire State. The most severe droughts were during 1929-41 and 1952-57.

UPDATE 3/30/17: One commenter complained that even though the title says “midwest” that I wasn’t reading carefully enough, and that Iowa was really the focus of the paper. To that I say, have a look at this table: 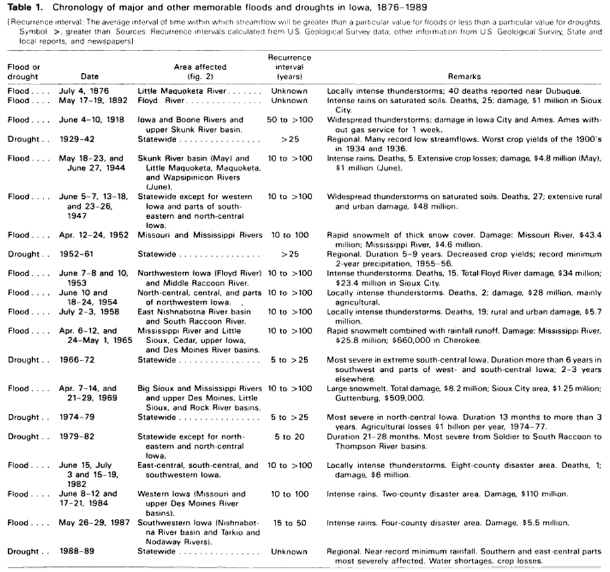 Iowas has the same volatility of weather patterns seen in Kansas.

NOTE: about 15 minutes after publication, this post was updated to fix some minor formatting issues, a typo, and add a link to the original PR source.