Amid reports that ice conditions between Newfoundland and southern Labrador are the worst in living memory, another polar bear was reported ashore in the area — just after biologist Andrew Derocher explained to the CBC that bears only come on land when sea ice conditions “fail.”

“Ice too thick for coast guard’s heavy icebreaker” said a 20 April 2017 CBC report on the state of ice in the Strait of Belle Isle. The pack is thick first year ice (four feet thick or more in places) and embedded with icebergs of much older, thicker ice. The ice packed along the northern shore of Newfoundland is hampering fishermen from getting out to sea and is not expected to clear until mid-May.

NASA Worldview shows the extent of the pack ice over northwest Newfoundland and southern Labrador on 19 April 2017 (the Strait of Belle Isle is the bit between the two):

The same day that the above satellite image was taken (19 April), at the north end of the Strait on the Newfoundland side, a polar bear was spotted in a small community northwest of St. Anthony (marked below,  “Wildberry Country Lodge” at Parker’s Brook). It’s on the shore of north-facing Pistolet Bay on the Great Northern Peninsula, near the 1000 year old Viking occupation site of L’Anse aux Meadows.

There were no photos of the Parker’s Brook bear but lots of others have been taken this year of almost a dozen seen along Newfoundland shorelines since early March: see my recently updated post, with an updated map of reported sightings. Harp seals are now abundant in the pack ice of southern Davis Strait, providing polar bears with an ample source of food when they need it most and therefore, a strong attractant to the area.

Yet, as I reported yesterday, polar bear specialist Andrew Derocher told the CBC this week that polar bears are almost always “forced” ashore by poor ice conditions. The CBC report included his tweet from 10 April, where he suggested “failed” Newfoundland ice conditions were the cause of multiple bears onshore in Newfoundland this year. 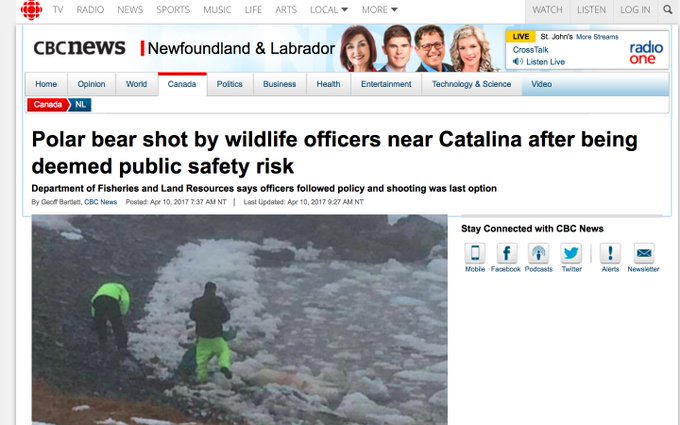 Similar thick ice conditions off northern Newfoundland (perhaps even worse) occurred in 2007, see Twillingate in the spring of 2007 below:

Yet, in 2007 there was not a single polar bear reported onshore in Newfoundland (as far as I am aware) but this year there were almost a dozen. And the photos taken this year show fat, healthy bears – not animals struggling to survive.

Derocher and I were both interviewed by CBC Radio Newfoundland about the unusually high numbers of polar bears onshore this spring but CBC contacted me first. I did two interviews: the staff at the St. John’s station recommended me so highly after my interview with them that the Gander station asked if I’d do one for them too. Both aired April 11 and a print version appeared on April 12. Someone (was it Derocher? I don’t know) obviously complained that I should not have been described as an “expert” and the print article was changed the next day to remove the offensive word. The next week Derocher also did a CBC radio interview to have his say (with a print version appearing on April 21) – but did he call them or did they call him? We’ll probably never know. I’ve included some quotes from both: readers can decide for themselves what to make of all this.

“Amid reports that ice conditions between Newfoundland and southern Labrador are the worst in living memory, another polar bear was reported ashore in the area — just after biologist Andrew Derocher explained to the CBC that bears only come on land when sea ice conditions “fail.”