From the UNIVERSITY OF EXETER

Important microscopic creatures which produce half of the oxygen in the atmosphere can rapidly adapt to global warming, new research suggests. 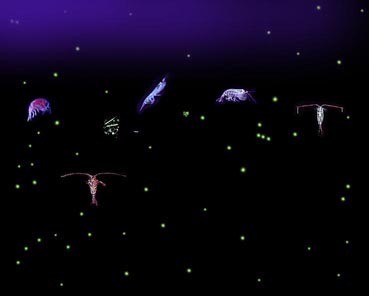 Phytoplankton, which also act as an essential food supply for fish, can increase the rate at which they take in carbon dioxide and release oxygen while in warmer water temperatures, a long-running experiment shows.

Monitoring of one species, a green algae, Chlamydomonas reinhardtii, after ten years of them being in waters of a higher temperature shows they quickly adapt so they are still able to photosynthesise more than they respire.

Phytoplankton use chlorophyll to capture sunlight, and photosynthesis to turn it into chemical energy. This means they are critical for reducing carbon dioxide in the atmosphere and for providing food for aquatic life.

It is crucial to know how these tiny organisms – which are not visible to the naked eye – react to climate change in the long-term. Experts had made predictions that that climate change would have negative effects on phytoplankton. But a new study shows green algae can adjust to warmer water temperatures. They become more competitive and increase the amount they are able to photosynthesise.

Algae examined by scientists which lived in warmer waters became fitter, and more competitive, proving that these tiny creatures adapt well to climate change. This suggests that this species could continue to be a plentiful source of food for aquatic life even if temperatures rise.

Previous studies which sought to answer this question have been conducted only in laboratories rather than looking at how phytoplankton reacted to real conditions. In contrast this research, which has run so far for ten years, has allowed researchers to examine how the green algae fare in their natural environment, where they are exposed to a more complex environment, and competitors.

Scientists at the University of Exeter, working with colleagues from Imperial College, and Queen Mary, University of London, have for a decade monitored ten tanks home to the phytoplankton with freshwater heated to four degrees centigrade above the ambient temperature. This is the rate at which our climate will have been warmed by the end of the century. The temperatures of ten other tanks were kept at normal temperatures. All the tanks were kept outside the Freshwater Biological Association’s river laboratory in Dorset. All twenty tanks were populated with the same types and proportion of various freshwater phytoplankton, zooplankton, invertebrates and plants. In the laboratory scientists tested how much the algae could photosynthesise, how fast they were growing, and how well they outcompeted organisms from the ambient ponds.

Lead author Dr Elisa Schaum said: “Phytoplankton may be microscopically small, but they are essential for all aquatic life. They provide food for zooplankton, which are then eaten by fish. Aquatic ecosystems produce the oxygen in every second breath we take, and are responsible for the oceans’ capacity as a sink for carbon dioxide.

“Other research had suggested that increased temperatures can pose problems for some types of phytoplankton. But we have shown that algae adapt very rapidly and that the mechanism underpinning their evolutionary response is linked to higher rates of photosynthesis – they can produce more energy, and channel it into faster growth rates and a better capacity for competition with other algae. They divide once a day and live in large populations of thousands of cells per millilitre of water. This means evolutionary changes are made through a few hundred of generations within a couple of years.

“It is important to recognise that climate change is a serious threat to aquatic ecosystems. Although the green algae monitored in our study cope well with elevated temperature, and may be able to sustain populations of organisms that eat them, we do not know yet what will happen to other groups of algae, and whether or not they will adapt through the same mechanisms.”

Phytoplankton photosynthesis is a critical flux in the carbon cycle, accounting for approximately 40% of the carbon dioxide fixed globally on an annual basis and fuelling the productivity of aquatic food webs. However, rapid evolutionary responses of phytoplankton to warming remain largely unexplored, particularly outside the laboratory, where multiple selection pressures can modify adaptation to environmental change. Here, we use a decade-long experiment in outdoor mesocosms to investigate mechanisms of adaptation to warming (+4 °C above ambient temperature) in the green alga Chlamydomonas reinhardtii, in naturally assembled communities. Isolates from warmed mesocosms had higher optimal growth temperatures than their counterparts from ambient treatments. Consequently, warm-adapted isolates were stronger competitors at elevated temperature and experienced a decline in competitive fitness in ambient conditions, indicating adaptation to local thermal regimes. Higher competitive fitness in the warmed isolates was linked to greater photosynthetic capacity and reduced susceptibility to photoinhibition. These findings suggest that adaptive responses to warming in phytoplankton could help to mitigate projected declines in aquatic net primary production by increasing rates of cellular net photosynthesis.

The formation of organic carbon by phytoplankton (net primary production, NPP) is a key flux in the carbon cycle 1,2 , contributing to nearly half of the carbon dioxide fixed globally on an annual basis 3,4 . There are currently major concerns that global warming will reduce aquatic NPP, due to increased nutrient limitation 5 , and because rates of respiration and zooplankton grazing tend to be more sensitive to rising temperatures than those of photosynthesis 6,​7,​8 . These projections, however, do not account for the capacity for phytoplankton to adapt rapidly to environmental change. Although ample evidence for rapid evolutionary responses in phytoplankton to warming exists 9,​10,​11 , our current understanding is based on highly simplified laboratory experiments, where populations are allowed to adapt free from natural enemies or competitors and where individual abiotic variables are manipulated in isolation. Consequently, we lack understanding of the mechanisms that govern evolutionary responses of phytoplankton to warming in sufficient detail and under a realistic ecological context, to capture the dynamics of thermal adaptation in models of aquatic biogeochemistry 5,​6,​7,​8 .

Phytoplankton growth depends on the balance between gross photosynthesis (P) and respiration (R) 12 . Crucially, as rates of R rise more rapidly with increases in temperature than do rates of P, the amount of carbon that can be allocated to growth after accounting for R declines rapidly as temperatures rise 10 . This imposes a physiological constraint on growth after acute exposure to high temperatures. Laboratory experiments have shown that phytoplankton can overcome this constraint and rapidly adapt to warming by down-regulating rates of R, thereby increasing the potential for carbon to be allocated to growth 10 . If general, this suggests that the mechanism underpinning evolutionary responses to warming in phytoplankton might also help to offset the short-term, exponential effects of temperature on rates of phytoplankton respiration and projected declines in aquatic primary production 6,​7,​8 . However, along with the vast majority of microbial evolution experiments, this mechanism was identified in isolated populations, evolving under controlled conditions in the laboratory. These experiments allow for highly controlled and replicated hypothesis testing, but their applicability in nature may be limited if interactions with other species and/or other components of the abiotic environment influence evolutionary responses to environmental change13,​14,​15 .

Here, we leverage a decade-long warming experiment in outdoor mesocosms 16 (Supplementary Fig. 1) to investigate the mechanisms of thermal adaptation in the green alga Chlamydomonas reinhardtii, embedded in complex, semi-natural ecosystems. Experimental warming has caused fundamental changes to the structure and biodiversity of the phytoplankton communities in these systems 17 ; however, several highly abundant core taxa, including C. reinhardtii, are cosmopolitan across the warmed (+4 °C) and ambient mesocosms. This experimental system therefore provides an opportunity to quantify the mechanisms of adaptation to warming in the context of naturally assembled communities. In line with laboratory experiments on the green alga Chlorella vulgaris10 , we hypothesized that evolutionary changes in metabolic traits, which increase net photosynthesis and thereby the potential for carbon allocation to growth, will also play a role in adaptation to long-term warming in populations of C. reinhardtii embedded in complex semi-natural ecosystems.