Guest Post by Werner Brozek, Edited by Just The Facts 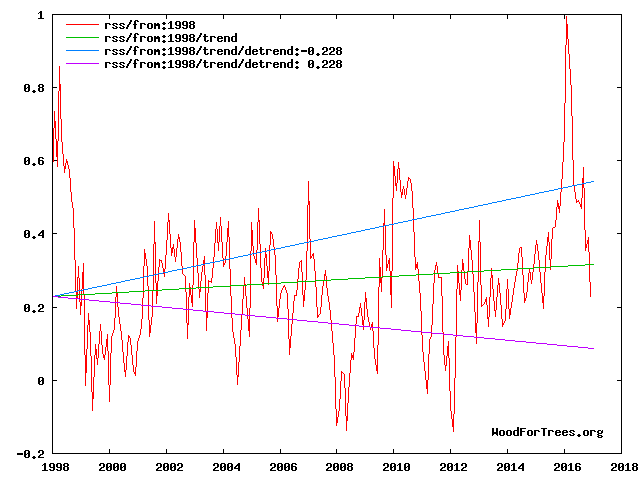 WoodForTrees.org – Paul Clark – Click the pic to view at source

As can be seen from the above graphic, the slope is positive from January 1998 to December 2016, however with the error bars, we cannot be 95% certain that warming has in fact taken place since January 1998. The high and low slope lines reflect the margin of error at the 95% confidence limits. If my math is correct, there is about a 30% chance that cooling has taken place since 1998 and about a 70% chance that warming has taken place. The 95% confidence limits for both UAH6.0beta5 and RSS are very similar. Here are the relevant numbers from Nick Stokes’ Trendviever site for both UAH and RSS:

What about GISS and HadSST3 and HadCRUT4.5? The December numbers are not in yet, but GISS will set a statistically significant record for 2016 over its previous record of 2015 since the new average will be more than 0.1 above the 2015 mark. HadSST3 will set a new record in 2016, but it will only be by a few hundredths of a degree so it will not be statistically significant. HadCRUT4.5 is still up in the air. The present average after 11 months is 0.790. The 2015 average was 0.760. As a result, December needs to come in at 0.438 to tie 2015. The November anomaly was 0.524, so only a further drop of 0.086 is required. This cannot be ruled out, especially since this Nicks site shows December 0.089 lower than November:

Also worth noting are that UAH dropped by 0.209 from November to December and RSS dropped by 0.162. Whatever happens with HadCRUT4.5, 2016 and 2015 will be in a statistical tie with a possible difference in the thousandths of a degree. The difference will be more important from a psychological perspective than a scientific perspective as it will be well within the margin of error.

In the sections below, we will present you with the latest facts. The information will be presented in two sections and an appendix. The first section will show for how long there has been no statistically significant warming on several data sets. The second section will show how 2016 so far compares with 2015 and the warmest years and months on record so far. For three of the data sets, 2015 also happens to be the warmest year. The appendix will illustrate sections 1 and 2 in a different way. Graphs and a table will be used to illustrate the data. Only the satellite data go to December.

For this analysis, data was retrieved from Nick Stokes’ Trendviewer available on his website. This analysis indicates for how long there has not been statistically significant warming according to Nick’s criteria. Data go to their latest update for each set. In every case, note that the lower error bar is negative so a slope of 0 cannot be ruled out from the month indicated.

On several different data sets, there has been no statistically significant warming for between 0 and 23 years according to Nick’s criteria. Cl stands for the confidence limits at the 95% level.

The details for several sets are below.

For Hadcrut4.5: The warming is statistically significant for all periods above four years.

For GISS: The warming is statistically significant for all periods above three years.

This section shows data about 2016 and other information in the form of a table. The table shows the five data sources along the top and other places so they should be visible at all times. The sources are UAH, RSS, Hadcrut4, Hadsst3, and GISS.

Down the column, are the following:

4. ano: This is the average of the monthly anomalies of the warmest year just above.

5. mon: This is the month where that particular data set showed the highest anomaly prior to 2016. The months are identified by the first three letters of the month and the last two numbers of the year.

6. ano: This is the anomaly of the month just above.

7. sig: This the first month for which warming is not statistically significant according to Nick’s criteria. The first three letters of the month are followed by the last two numbers of the year.

9. Jan: This is the January 2016 anomaly for that particular data set.

10. Feb: This is the February 2016 anomaly for that particular data set, etc.

21. ave: This is the average anomaly of all months to date.

22. rnk: This is the rank that each particular data set would have for 2016 without regards to error bars and assuming no changes to the current average anomaly. Think of it as an update 55 minutes into a game. However the satellite data are complete for the year.

If you wish to verify all of the latest anomalies, go to the following:

To see all points since January 2016 in the form of a graph, see the WFT graph below. 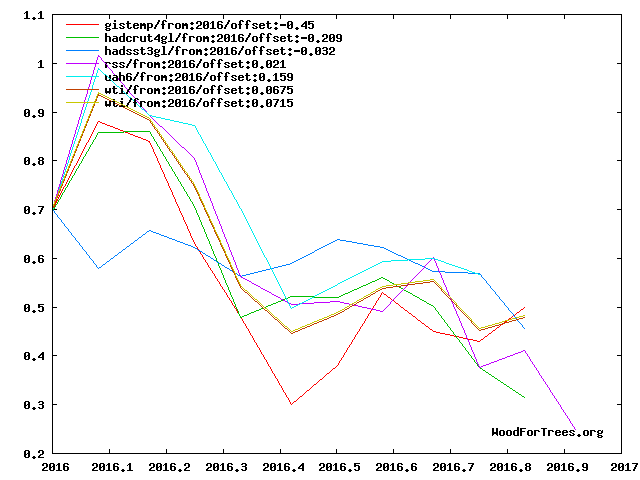 WoodForTrees.org – Paul Clark – Click the pic to view at source

As you can see, all lines have been offset so they all start at the same place in January 2016. This makes it easy to compare January 2016 with the latest anomaly.

The thick double line is the WTI which shows the average of RSS, UAH6.0beta5, HadCRUT4.5 and GISS.

In this part, we are summarizing data for each set separately.

For Hadcrut4.5: The warming is significant for all periods above four years.

For GISS: The warming is significant for all periods above three years.

Does it seem odd that only GISS will probably set a statistically significant record in 2016?

287 thoughts on “Satellite Records and Slopes Since 1998 are Not Statistically Significant. (Now Includes November and December Data)”