In my news feed today comes this pathetic excuse for a press release that tries to tell us that weather events, which span hours to days to sometimes weeks in length (such as a blocking high), are actually climate events. I suppose I shouldn’t be surprised, after all it has the mark of Schellnhuber on it. But really though, they ought to be ashamed about the press release, because as anyone knows, climate spans decades, and does not exist on a smaller temporal scale. Here, they are also trying to make the argument that climate change is enhancing “ethnical fractionalization”. It’s just another thinly veiled attempt to try to link climate to the war in Syria, as has been so popular with the left. Document and identity thief Peter Gleick for example, argues in a paper “As described here, water and climatic conditions have played a direct role in the deterioration of Syria’s economic conditions.”  Water, sure, climate not so much. For example, take the flag of Lebanon, note the cedar tree: 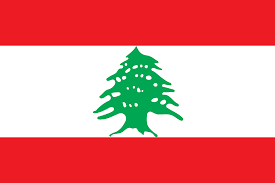 The Epic of Gilgamesh describes vast, unexplored cedar forests dominating the lands of the Mediterranean and Middle East. Now, deforestation makes scenes like this in Lebanon fairly common:

Remnants of a cedar forest in North Lebanon Image: www.reforest-lebanon.org

Now, with so many trees being cut for building, fuel, and export, there’s little remaining. A reforest Lebanon campaign hopes to reverse the problem.

In Syria’s case, the same thing is happening as this article from 2013 illustrates: 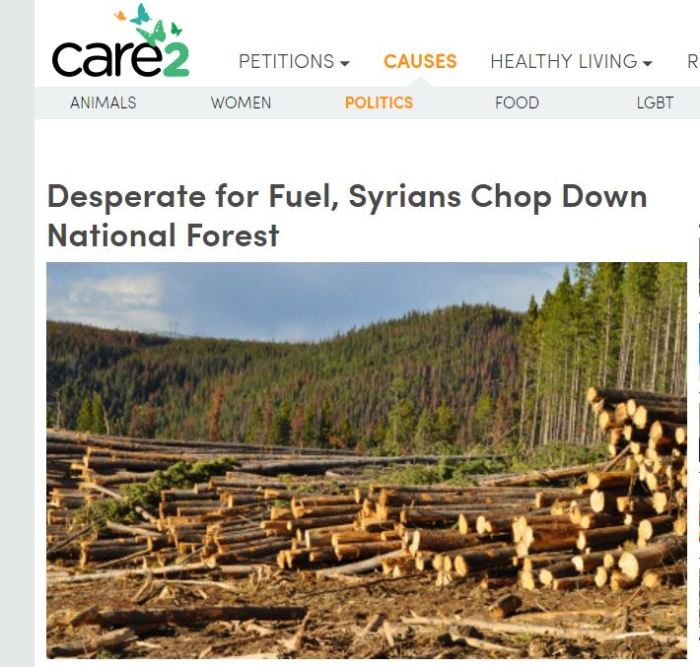 When armed political conflict occurs, the first causuality is stable supply lines. Any soldier, rebel, or general can tell you this. Yet climate crusading people like Gleick and Schellnhuber look for correlations, find what they are looking for, and discount the real human driven issue. Droughts start occurring when deforestation kills the local evapotranspiration – robbing the atmosphere and clouds of much needed moisture, resulting in less rainfall. It’s a age-old human pattern of land use abuse, and a textbook climate case of correlation is not causation.

At least, with increased CO2, the remaining trees can use water more efficiently.

This finding, to be published in the Proceedings of the National Academy of Sciences, can help in the design of security policies even more so since future global warming from human-made greenhouse-gas emissions will increase natural disasters and therefore likely also risks of conflicts and migration.

“Devastating climate-related natural disasters have a disruptive potential that seems to play out in ethnically fractionalized societies in a particularly tragic way,” says lead author Carl Schleussner from the Berlin think-tank Climate Analytics and the Potsdam Institute for Climate Impact Research (PIK). Almost one quarter of conflicts in ethnically divided countries coincide with climatic calamities, the scientists found; importantly, this is even without taking climate change into account. “Climate disasters are not directly triggering conflict outbreak, but may enhance the risk of a conflict breaking out which is rooted in context-specific circumstances. As intuitive as this might seem, we can now show this in a scientifically sound way,” says Schleussner, who has also been a research fellow at Humboldt University, Berlin, at the Integrative Research Institute on Transformations of Human-Environment Systems (IRITHESys).

“We’ve been surprised to which extent results stick out compared to e.g. inequality”

Previous research often either focused on climatic variables such as temperature increase that cannot be directly translated into societal impacts, or has been limited to case studies. The new study moves beyond that by focusing directly on natural disaster-related economic damage data, collected by the international reinsurance market leader Munich Re. Using the mathematical method of event coincidence analysis, this is combined with a conflict dataset established by security research, and a common index for ethnical fractionalization. The study looks at the period 1980-2010.

“We’ve been surprised by the extent that results for ethnic fractionalized countries stick out compared to other country features such as conflict history, poverty, or inequality,” says co-author Jonathan Donges, co-head of PIK’s flagship project on co-evolutionay pathways COPAN. “We think that ethnic divides may serve as a predetermined conflict line when additional stressors like natural disasters kick in, making multi-ethnic countries particularly vulnerable to the effect of such disasters”

The study cannot provide a risk assessment for specific states. Since armed conflicts and natural disasters are fortunately rare events, data from single countries is necessarily limited and does not suffice for statistical analyses.

“Armed conflicts are among the biggest threats to people, killing some and forcing others to leave their home and maybe flee to far-away countries. Hence identifying ethnic divide and natural disasters as enhancing destabilization risks is potentially quite relevant,” says co-author Hans Joachim Schellnhuber, director of the Potsdam Institute for Climate Impact Research. “Human-made climate change will clearly boost heatwaves and regional droughts. Our observations combined with what we know about increasing climate-change impacts can help security policy to focus on risk regions.” Several of the world’s most conflict-prone regions, including North and Central Africa as well as Central Asia, are both exceptionally vulnerable to human-made climate change and characterized by deep ethnic divides. “So our study adds evidence,” Schellnhuber concludes, “of a very special co-benefit of climate stabilization: peace.”

75 thoughts on “When will they learn? Climate is NOT the same as weather”