Guest essay by Andy May

Sometimes people ask climate skeptics if they believe in evolution or gravity. They want to ridicule our skepticism by equating man-made climate change to evolution or gravity. Evolution and gravity are facts and man-made climate change is a hypothesis. Equating “climate change” to gravity or evolution is valid, as all three are facts. Climate changes, gravity holds us to the Earth’s surface and species evolve. Gravity and evolution have generally accepted theories of how they work. Einstein developed our current scientific theory of gravity. Newton provided us with his descriptive “Law of Gravitation.” Newton’s law tells us what gravity does and it is very useful, but it tells us nothing about how it works. For that we need Einstein’s theory of relativity. Theories and laws are not necessarily related in science. A law simply describes what happens without describing why. A scientific theory attempts to explain why a relationship holds true.

In the scientific community, for both a law and a theory, a single conflicting experiment or observation invalidates them. Einstein once said:

“No amount of experimentation can ever prove me right; a single experiment can prove me wrong.”

So, let’s examine our topics in that light. Newton’s descriptive law of gravity, based on mass and distance, are there any exceptions? Not to my knowledge, except possibly on galactic sized scales, black holes and probably on very, very small sub-atomic scales. In everyday life, Newton’s law works fine. How about Einstein’s theory of gravity (Relativity), any exceptions? None that I know of at any scale.

How about evolution? Species evolve, we can see that in the geological record. We can also watch it happen in some quickly reproducing species. Thus we could describe evolution as a fact. It happens, but we cannot describe how without more work. Early theories of the evolutionary process include Darwin’s theory of natural selection andLamarck’s theory of heritable species adaptation due to external stresses. Due to epigenetic research we now know that Darwin and Lamarck were both right and that evolution involves both processes. For a summary of recent research into the epigenetic component of evolution see this Oxford Journal article. Thus well-established facts and scientific laws rarely change but theories do evolve. I might add that while facts and laws don’t often change, they are easily dismissed when contradictory data are gathered. The modern theory of evolution is a good example of where competing theories can merge into one.

Most scientific theories begin as hypotheses. A hypothesis is best described as an idea of what might be causing a specific event to occur. A proper scientific hypothesis, like a theory, must be falsifiable. That is, we must be able to design an experiment or foresee an observation that will make the hypothesis false. “Climate change” is not falsifiable, it is not a scientific hypothesis or a theory. “Man-made climate change” is a scientific hypothesis since it is falsifiable. Hypotheses and theories are evolving things, new facts and observations cause them to change. In this way we build the body of science. Science is mostly skepticism. We look for what does not fit, we poke at established facts and laws, at theories and hypotheses. We try and find flaws, we check the numbers. Worse, science done properly means we spend more time proving ourselves wrong than we do proving we are right. Life is tough sometimes.

So how does this fit with the great climate change debate. I’ve made a table of phrases and identified each common phrase as a fact, theory, law, hypothesis, or simply an idea. These are my classifications and certainly open for debate.

In Table 1 we can see that the comparison of man-made climate change and the possibility of a man-made climate catastrophe are not really comparable to the theories of gravity and evolution. Man-made climate change is more than an idea, it is based on some observations and reasonable models of the process have been developed and can be tested. But, none of the models have successfully predicted any climatic events. Thus, they are still a work-in-progress and not admissible as evidence supporting a scientific theory.

The idea of man-made climate change causing a catastrophe at the scale of Islamic terrorism is pure speculation. The models used to compute man’s influence don’t match any observations, this is easily seen in Figure 1 which is Dr. John Christy’s graph of the computer model’s predictions versus satellite and weather balloon observations. I should mention that satellite and weather balloon measurements are independent of one another and they are independent of the various surface temperature datasets, like HADCRUT and GHCN-M. All of the curves on the plot have been smoothed with five year averages.

The purple line going through the observations is the Russian model “INM-CM4.” It is the only model that comes close to reality. INM-CM4, over longer periods, does very well at hindcasting observed temperatures. This model uses a CO2 forcing response that is 37% lower than the other models, a much higher deep ocean heat capacity (climate system inertia) and it exactly matches lower tropospheric water content and is biased low above that. The other models are biased high. The model predicts future temperature increases at a rate of about 1K/century, not at all alarming and much lower than the predictions of the other models.

One can consider each model to be a digital experiment. It is clear that the range of values from these digital experiments exceeds the predicted average temperature increase. This does not give us much confidence in the accuracy of the models. Yet, the IPCC uses the difference between the mean model temperature anomalies and observed surface temperatures since 1950 to compute man’s influence on climate. In Figure 2 we see the model runs in light blue and yellow and the model averages in blue and red. Overlain on the plot are surface temperature measurements in black. In graph (a) the models use a scenario that the IPCC believes represents both natural and anthropogenic climate forcings. In graph (b) they use a scenario that they believe represents only natural climate forcings.

Figure 2 (click on the figure to see Chapter 10 of the most recent IPCC report, “Detection and Attribution of Climate Change,” these graphs are on page 879)

The graphs are quite small and cover over 150 years, but even so, significant departures of the observed temperatures from the model mean are quite apparent around 1910, 1940 and in recent years. Further the range of model results is annoyingly large making it difficult to accept the mean value of the runs in a computation of man’s influence. But, in any case graph Figure 2(b) shows a flat natural climate trend and all of the observed temperature increase from 1950 to today is ascribed to man. This result has generated a lot of criticism from Soon, Connolly and Connolly, ProfessorJudith Curry and others. In particular Soon, Connolly and Connolly (SCC15) believe that the IPCC chose an inappropriate model of the variation in the sun’s output (TSI or total solar irradiance). There are many models of solar variation in the peer reviewed literature and it is a topic of vigorous debate. Eight recent models are presented in Figure 8 of SCC15 (see Figure 3). Only low solar variability models (those on the right of Figure 3) are used by the IPCC to compute man’s influence on climate although just as much evidence exists for the higher variability models on the left. The scales used in the graphs are all the same, but the top and bottom values vary. At minimum, the IPCC should have run two cases, one for high variability and one for low. SCC15 clearly shows that the model used makes a big difference. 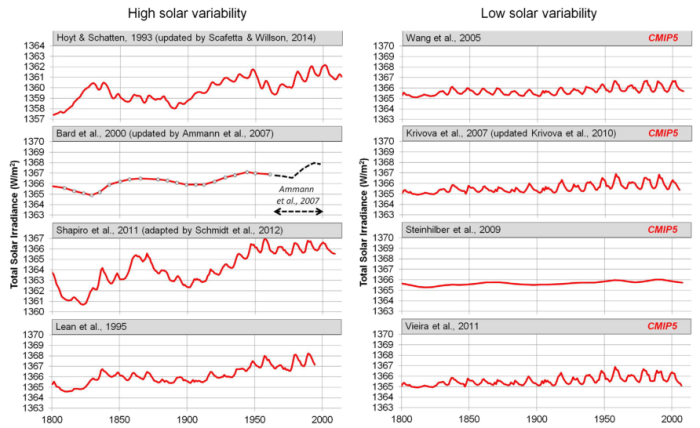 Wyatt and Curry (WC13) believe that natural temperature variation due to long term natural cycles is not represented correctly in Figure 2(b). Their “Stadium Wave” suggests that considerable natural warming was taking place in the 1980’s and 1990’s. If the long term (30 years or so) cycles described in WC13 were incorporated into Figure 2(b) the amount of warming attributed to man would be much less. Wyatt does consider variation in total solar irradiance to be a possible cause.

Any computer Earth model must establish a track record before it is used in calculations. The Earth is simply too complex and natural climate cycles are poorly understood. If natural cycles cannot be predicted they cannot be subtracted from observations to give us man’s influence on climate. The debate is not whether man influences climate, the debate is over how much man contributes and whether or not the additional warming dangerous. This observer, familiar with the science, would say the jury is still out. Certainly, the case for an impending catastrophe has not been made as this requires two speculative jumps. First, we need to assume that man is the dominant driver of climate, second we need to assume this will lead to a catastrophe. One can predict a possible catastrophe if the most extreme climate models are correct, but the record shows they are not. Only INM-CM4 matches observations reasonably well and INM-CM4 does not predict anything remotely close to a catastrophe.

In the study of the process of evolution the problem is the same. Some believe that the dominant process is natural selection and epigenetic change is minor. Some believe the opposite. Everyone believes that both play a role. As in climate science, figuring out which process is dominant is tough.

Recent climate history (the “pause” in warming) suggests that we have plenty of time to get our arms around this problem before doing anything drastic like destroying the fossil fuel industry and sending billions of people into poverty due to a lack of affordable energy. We owe a lot to cheap fossil fuels today. As Matt Ridley computed in “The Rational Optimist” a Kilowatt-hour (kWh) of electricity cost an hour of work in 1900 and only five minutes of work today. The average house (in the US) uses 911 KWh of electricity a month. This cost an impossible 114 eight hour days of work in 1900 and a more reasonable nine days today. If the projections in WC13 are correct, the “pause” may go on for quite a while, giving us much more time. We don’t have to jump off an economic cliff today.

Andy May has been a petrophysicist since 1974. He has worked on oil, gas and CO2 fields in the USA, Argentina, Brazil, Indonesia, Thailand, China, UK North Sea, Canada, Mexico, Venezuela and Russia. He specializes in fractured reservoirs, wireline and core image interpretation and capillary pressure analysis, besides conventional log analysis. He is proficient in Terrastation, Geolog and Powerlog software. His full resume can be found on linkedin or here:AndyMay