Reef system with 10,000 km2 found at the Amazon River mouth

Researchers mapped a reef system in the most unlikely area of the Brazilian coast; River plume affects sunlight, pH, temperature and salinity; chemosynthesizing microorganisms support the ecosystem — oil and gas companies operate close to the reefs 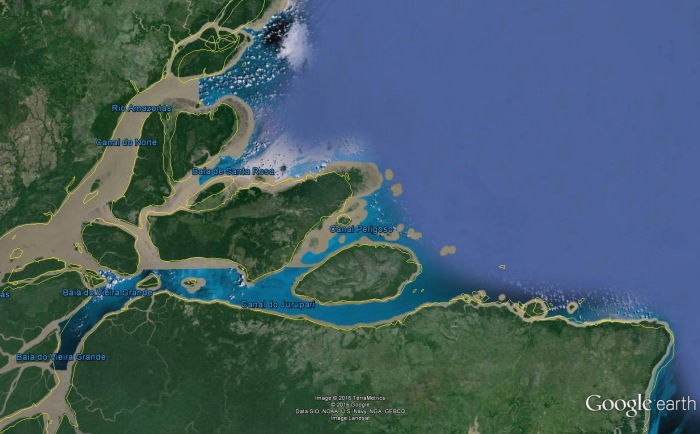 From the UNIVERSITY OF SAO PAULO SCIENTIFIC OUTREACH UNIT and the “soon to be complaining we must save the reef” department:

The changes that the Amazon River promotes in the tropical North Atlantic ocean water make an unfavorable environment for reef development. Every second, 175 million liters of water mixed with sediments are brought to the ocean. The result is low sunlight penetration, variability in nutrient concentration, salinity and pH, extensive moody bottoms and significant changes in temperature and oxygenation levels towards the bottom – conditions not associated with reefs. The plume generated by the Amazon River has 1.3 million km2 and flows mostly to the North, reaching areas as far as the Caribbean Sea.

Against all the odds, 39 scientists from nine Brazilian and one North-American universities mobilized two expeditions to the mouth of the river in other to map the bottom of the ocean in the outer shelf. Two previous studies – from the 1970s and 1980s – reported the findings of single samples of carbonatic structures. None suggested the existence of a reef system underneath the river plume. Surprisingly, the researchers found reefs in a complex as extensive as 1,000 km, in depths from 10 to 120 meters, with rhodolith beds, live calcareous algae, sponges, corals and hydrocorals colonies formed from 13,000 years ago till the present. The system is an habitat for 73 species of fishes and six species of lobsters.

The article in which the novelty is described was published in Science Advances, on April 22. (An extensive reef system at the Amazon River mouth). It includes results from geophysical and physical-chemical surveys, radiocarbon dating and petrographic characterization of reef samples, biogeochemical tracers and microbial metagenomics.

The Amazon reefs are already considered at risk despite being a recent discovery. In 2013, auctions defined the oil companies responsible for 80 exploratory blocks at the same area of the study – 20 are in current production. Whether the companies knew about the reefs, they didn’t publish the information broadly, according to the senior author Fabiano L. Thompson, from the Federal University of Rio de Janeiro (UFRJ). He classifies this large-scale industrial activity as a major environmental challenge that can threaten the existence of the reef system. Researchers ask for a more complete social-ecological assessment of the system before “impacts become extensive and conflicts among the stakeholders escalate”.

The reefs are located as a continuity of Manuel Luiz reefs, in the Maranhão state (Northeast Region of Brazil), forming an unique carbonate system that pass in front of Para and Amapa states (North of Brazil), and reach French Guiana. It fills a major gap thought to exist in Western Atlantic reefs, occupying 10,000 km2. Some structures have lengths of up to 300 meters and heights of up to 30 meters.

“It is a paradigm shift in Geology, Ecology and Biology. In Paleogeology, we have to review ancient areas where we assumed there could not be a river mouth because of fossil reefs. These two elements cannot be considered excluding anymore”, Michel Mahiques, geologist and professor at the Oceanographic Institute at University of São Paulo (IO-USP) says. He lead the team responsible for mapping the bottom topography.

The maps were processed from data generated from two side scan sonars. The sonars emit acoustic signals to the left and to the right side towards the bottom. The intensity of the echo and the time it takes to reach the sonar indicate the distance to the bottom, its topography and whether it comes back from hitting a smooth or a hard structure. Eduardo Siegle and Rodolfo J. S. Dias, professor and master student from IO-USP, also participated on mapping and characterization of the bottom.

The Amazon reefs defy the traditional knowledge about the ecological balance of a reef environment. Reefs are usually found in warm see water with constant salinity, high light penetration level and generation of oxygen and biomass by photosynthesizers. The system at the Amazon river mouth lives under a plume layer thanks to chemosynthesizing microorganisms capable of transforming nitrates and other minerals into compounds that can be used as food by the benthic organisms.

The chemosynthesizers support a relatively complex ecosystem in low light levels and anoxic or suboxic conditions in the Northern and Central sectors. Some sponges can also tolerate these conditions for several days and have broader tolerance to acidification and temperature anomalies than corals and coralline algae. Authors indicate that molecular and genetic analysis will likely identify new microorganisms or sponges species in this reef system.

Coral reefs are in rapid decline and register biodiversity losses due to pollution, overfishing, temperature anomalies and ocean acidification. The Amazon system, though, has survived for thousand years now under severe conditions that can be compared to climate change predicted scenarios. It may give important insights on coral reefs’ trajectories in the next decades. The sponge dominance in the Central sector of the Amazon reefs, for example, points towards a phase-shift from coral domination to sponge domination in coral reefs.

70 thoughts on “Thriving reef system discovered in the most unlikely of places: the dirty mouth of the Amazon river”