I don’t know if this is a real measurement, and that the Total Solar Irradiance (TSI) measured by the SORCE project is real, or if we are seeing another sensor failure situation like what happened with NSIDC and the sea-ice measurements done by DMSP F17 satellite.

Yesterday this graph of TSI plotted by SORCE was brought to my attention by WUWT reader Stephen Shochat:

I emailed our resident solar physicist, Dr. Leif Svalgaard, but got no reply, he may be traveling or may have thought it not noteworthy. Today I checked the graph again, thinking perhaps a correction might have been made if there was a calibration or instrument error, there was none, and the TSI value decreased further, to about 1360.25 watts/m² 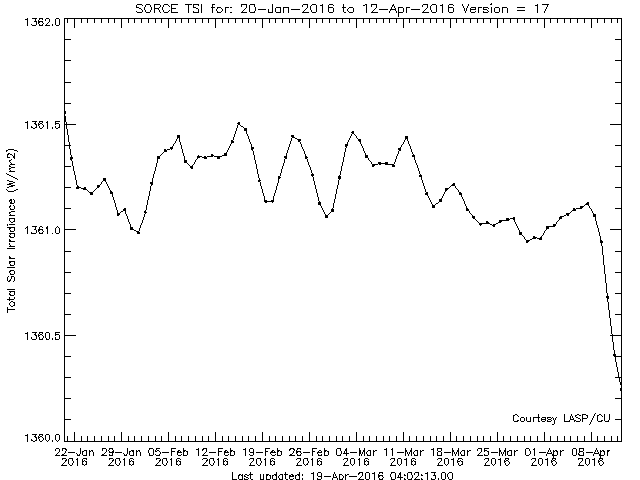 A look at the sun itself suggests it may simply be due to a very, very, large sunspot rotating through the Earth-View. My guess is we’ll see a rebound in TSI once it crosses the horizon. Occam’s Razor.

If nothing else, this demonstrates that sunspots can have quite a large, if only temporary, forcing  on TSI and Earth’s received energy budget.