The potential for the massive El Niño to transition into La Niña later in the year is one of the hottest topics in commodities markets right now. The short question-and-answer session would look like this: Are we headed for La Niña toward the end of 2016? Looks that way. Will it be a big one? Not sure.

A La Niña environment has already begun to develop. Cooler waters are building beneath the surface in the Pacific Ocean and El Niño-supporting trade winds have lessened. But sea surface temperatures, or SSTs, in the defining region of the Pacific remain very warm, so we are still amid a strong El Niño event.

It is helpful to look for historical instances in which El Niño turned into La Niña through the course of a year. This has occurred only a handful of times since 1982, but there are enough similarities among these analogs that we can use them to inform this year’s likely outcome. 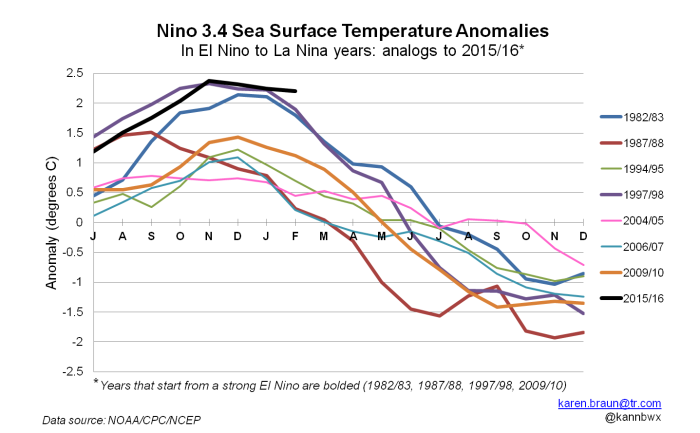 106 thoughts on “How Much Global Cooling Will We See On Transition To La Niña?”