From the AMERICAN GEOPHYSICAL UNION and the Australian “ARC Centre of Excellence for Climate System Science” (you know, that outfit that gave “Ship of Fools” Chris Turney an award) comes this exercise in climate modeling numerology. From the introduction in the paper:

In this study we use the well-established Fractional Attributable Risk (Allen, 2003; FAR) framework to investigate the changing influence of anthropogenic forcings on record-breaking hot seasons and years for different regions around the world. The probability of record hot events is compared between climate model simulations with both natural and anthropogenic forcings and simulations forced by natural climate influences only.

They also go on to say they have detected emergence of AGW driven heat waves in the Central USA in recent years. From Figure 3. “FAR timeseries of record-breaking hot summers for the globe and five regions” here is the panel for the Central US: 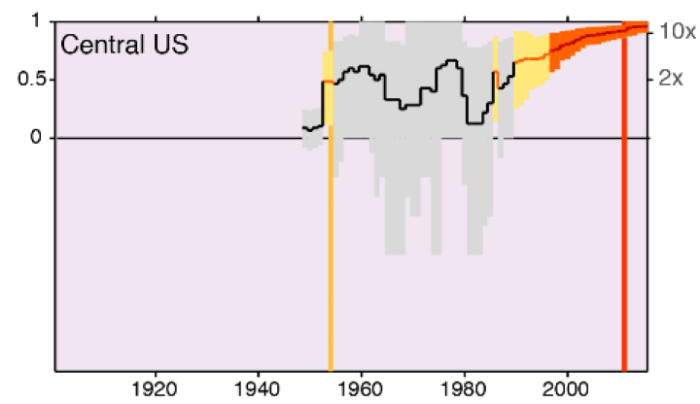 They suggest that from 2000 onward, heat waves should be anywhere from 2 to 10 times more common. By that reasoning, this graph of record high temperature should also be increasing during that period, but it isn’t: 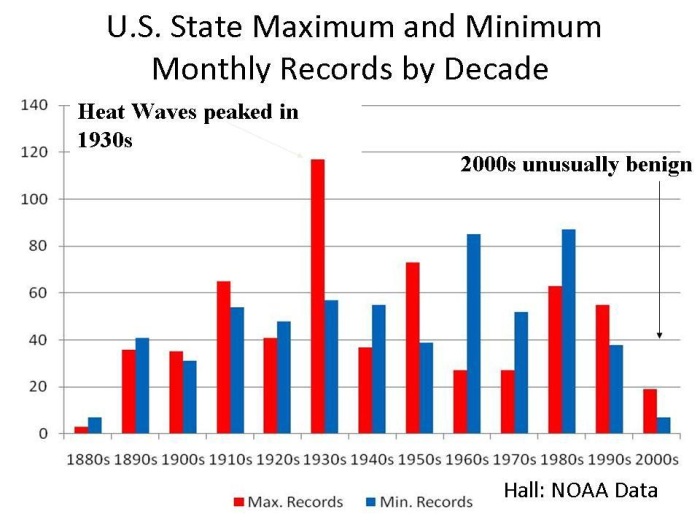 As should this one: 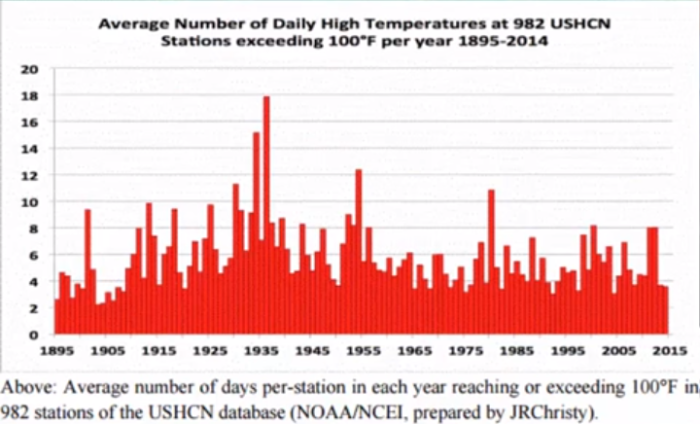 Note the dust bowl period in the 1930’s mainly affected the Central US.

In short, the entire study is an attempt to pull a desired result out of a set of data. Reading the paper, it seems clear to me that the conclusion existed before the paper was written.  Here is the press release for what it’s worth.

WASHINGTON, DC — Humans have triggered the last 16 record-breaking hot years experienced on Earth (up to 2014), with our impact on the global climate going as far back as 1937, a new study finds.

The study suggests that without human-induced climate change, recent hot summers and years would not have occurred. The researchers also found that this effect has been masked until recently in many areas of the world by the wide use of industrial aerosols, which have a cooling effect on temperatures.

“Everywhere we look, the climate change signal for extreme heat events is becoming stronger,” said Andrew King, a climate extremes research fellow at the University of Melbourne, Australia and lead author of the study. “Recent record-breaking hot years globally were so much outside natural variability that they were almost impossible without global warming.”

The researchers examined weather events that exceeded the range of natural variability and used climate modelling to compare those events to a world without human-induced greenhouse gases. The study was accepted for publication yesterday in Geophysical Research Letters, a journal of the American Geophysical Union.

“In Australia, our research shows the last six record-breaking hot years and last three record-breaking hot summers were made more likely by the human influence on the climate,” King said. “We were able to see climate change even more clearly in Australia because of its position in the Southern Hemisphere in the middle of the ocean, far away from the cooling influence of high concentrations of industrial aerosols.”

Aerosols in high concentrations reflect more heat into space, thereby cooling temperatures. However, when those aerosols are removed from the atmosphere, warming returns rapidly. The researchers observed this impact when they looked at five different regions: Central England, Central Europe, the central United States, East Asia and Australia.

There were cooling periods, likely caused by aerosols, in Central England, the central United States, Central Europe and East Asia during the 1970s before accelerated warming returned, and aerosol concentrations also delayed the emergence of a clear human-caused climate change signal in all regions studied except Australia, according to the study.

“In regards to a human-induced climate change signal, Australia was the canary in the coal mine for the rest of the world,” King said.

73 thoughts on “Claim: Human influence on climate dates back to 1930s”