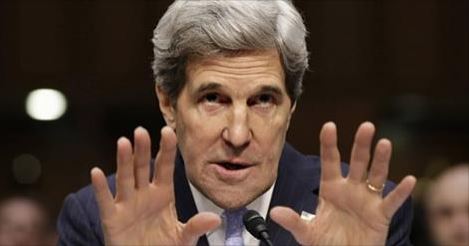 US Secretary of State John Kerry has just cranked up the rhetoric on Climate Change, by mixing statements about National Security threats and Climate Politics.

In a speech delivered at Old Dominion University in Norfolk, home to the world’s largest naval base and already experiencing flooding linked to climate change, Kerry called climate change a threat to national security.

“We have to prepare ourselves for the potential social and political consequences that stem from crop failures, water shortages, famine and outbreaks of epidemic disease,” he said. “And we have to heighten our national security readiness to deal with the possible destruction of vital infrastructure and the mass movement of refugees — particularly in parts of the world that already provide fertile ground for violent extremism and terror.

“The science tells us unequivocally, those who continue to make climate change a political fight put us all at risk,” he said. “And we cannot sit idly by and allow them to do that.”

What can I say – hurry up with that dark money cheque Anthony, and make it a big one. I’ll need the cash to build my hollowed out volcano lair, so I can hide from Kerry’s new Homeland Security Climate Ops Team.