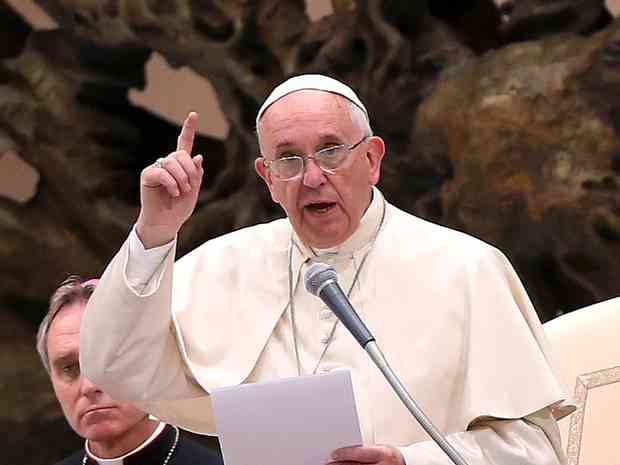 Pope Francis has demanded skeptics renounce climate skepticism, and affirmed his support for strongly partisan initiatives such as the EPA Clean Air Initiative.

In a tougher-than-expected call for action on global warming, the spiritual leader of more than 70 million American Catholics defied calls among some Republicans to steer clear of politics by making clear he believed this was a moral issue.

“Climate change is a problem which can no longer be left to a future generation,” said the pope, who invited contrast with the civil rights struggle by invoking the spirit of Martin Luther King Jr in support of his argument.

“Mr President, I find it encouraging that you are proposing an initiative for reducing air pollution,” the pope said with a slow, deliberate delivery that left little room for misinterpretation.

His Holiness has ignored approaches, from those who have sought in good faith to present other viewpoints.

It seems ironic, that the Church effort to repeat the mistakes of the past, occurs on the 500th anniversary of a letter written by Galileo. The letter explains in simple terms, why the Church’s efforts to define scientific truth , to quash scientific uncertainty with religious moral authority, were so misguided. Words of wisdom, which are as applicable today, as there were when Galileo wrote them (quote courtesy of Dr. Willie Soon);

Therefore let these men begin to apply themselves to an examination of the arguments of Copernicus and others, leaving condemnation of the doctrine as erroneous and heretical to the proper authorities. Among the circumspect and most wise Fathers, and in the absolute wisdom of one who cannot err, they may never hope to find the rash decisions into which they allow themselves to be hurried by some particular passion or personal interest. With regard to this opinion, and others which are not directly matters of faith, certainly no one doubts that the Supreme Pontiff has always an absolute power to approve or condemn; but it is not in the power: of any created being to make things true or false, for this belongs to their own nature and to the fact. Therefore in my judgment one should first be assured of the necessary and immutable truth of the fact, over which no man has power. This is wiser counsel than to condemn either side in the absence of such certainty, thus depriving oneself of continued authority and ability to choose by determining things which are now undetermined and open and still lodged in the will of supreme authority. And in brief, if it is impossible for a conclusion to be declared heretical while we remain in doubt as to its truth, then these men are wasting their time clamoring for condemnation of the motion of the earth and stability of the sun, which they have not yet demonstrated to be impossible or false…

Given that to date climate alarmists, whose claims are based on computer models, have failed to produce a model which can predict the climate, it seems fair to suggest things are still very much undetermined and open.

Update – Video link updated, the original video was removed by the user who posted it.