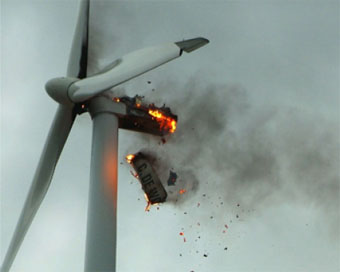 The Australian Renewables industry has reacted with fury to a leaked suggestion that a new “wind commissioner” will be appointed, to handle complaints about turbine noise.

The Abbott government’s proposed “wind commissioner” represents a “new low in its relentless anti-renewables campaign”, the wind industry says, suggesting the Coalition might do better to appoint a “coal commissioner”.

Guardian Australia revealed on Thursday the Abbott government has agreed to appoint a “windfarm commissioner” to handle complaints about turbine noise, and a new scientific committee to investigate, again, their alleged impacts on human health, in a deal with anti-wind senators to win amendments to renewable energy legislation.

“This is a blatant attempt by the Abbott government to use taxpayer cash to appoint a propaganda agent for the anti-wind brigade,” said Andrew Bray, coordinator of the Australian Wind Alliance.

My personal impression is the wind industry might be frightened of the possibility of close scrutiny. Up until now, in my opinion, they have had a free ride – their status as a “green” industry has to some extent allowed them to shrug off worrying reports of adverse health effects from the infrasonic industrial noise pollution produced by wind turbines, and an embarrassing rain of bird carcasses and bats killed by blade strikes.

It looks like, in Australia at least, that free ride is about to come to an end. If there is nothing to reports of adverse health effects and slaughtered birds and bats, the wind industry surely have nothing to fear from a little scrutiny. But if there is any truth to these accusations, it would be better for the wind industry to come clean, to admit the problems and welcome scrutiny, otherwise they may in the future face accusations of having used tobacco industry style dirty tricks, to conceal significant health and environmental problems associated with wind turbines.