UPDATE:  See the note at the end of the post.

The intent of this letter to present when and how the new NOAA sea surface temperature data differ during the hiatus from the night marine air temperature data,  which are used for bias adjustments over the term of the data.

Figure 1 is Figure 3 from this weekend’s post More Curiosities about NOAA’s New “Pause Busting” Sea Surface Temperature Dataset. The new NOAA ERSST.v4 sea surface temperature data for the latitudes of 60S-60N have a noticeably higher warming rate during the hiatus than the UKMO HadNMAT2 data, which served as the reference for bias adjustments in your new ERSST.v4 data.

From January 1998 to December 2010, the last month of the HadNMAT2 data, the new NOAA ERSST.v4 data basically doubled the warming rate of the reference HadNMAT2 data. In other words, the HadNMAT2 data do not support your claims of no slowdown in global warming.

Someone might want to try to claim that the higher warming rate of the NOAA ERSST.v4 data is caused by the growing number of buoy-based versus ship-based observations. That logic of course is flawed (1) because the HadNMAT2 data are not impacted by the buoy-ship bias, which is why NOAA used the HadNMAT2 data as a reference in the first place, and (2) because the two datasets have exactly the same warming rate for much of the period shown in Figure 1. That is, the trends of the two datasets are the same from July 1998 to December 2007, a period when buoys were being deployed and becoming the dominant in situ source of sea surface temperature data. See Figure 2. 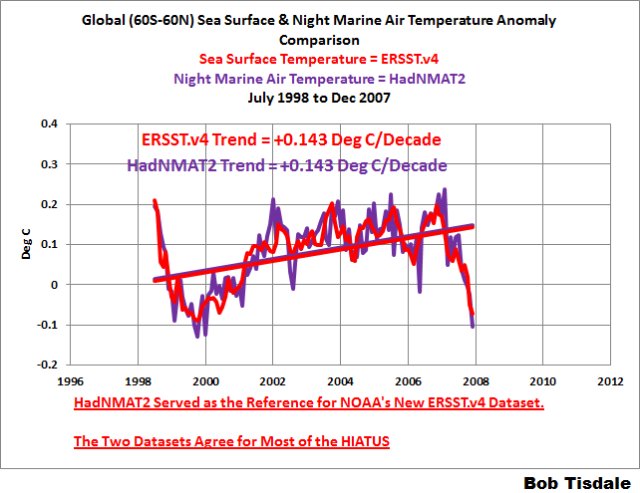 Note that magnitude of the trends during that time period. Back in 2008, few people were discussing a slowdown in global warming.

In reality, the differences in the trends shown in Figure 1 are based on the responses to ENSO events. Notice in Figure 1 how the night marine air temperature (HadNMAT2) data have a greater response to the 1997/98 El Niño and as a result they drop more during the transition to the 1998-01 La Niña. We might expect that response from the HADNMAT2 data because they are not infilled, while the greater spatial coverage of the ERSST.v4 data would tend to suppress the data volatility in response to ENSO. We can see the additional volatility of the HadNMAT2 data throughout Figure 2. At the other end of the graph in Figure 1, note how the new NOAA ERSST.v4 sea surface temperature data have the greater response to the 2009/10 El Niño…or, even more likely, they have been adjusted upward unnecessarily. The additional response of the sea surface temperature data to the 2009/10 El Niño is odd, to say the least.

What caused that unusual behavior, Tom? Could it possibly be the Lowess filtering you’ve elected to use for the bias adjustments, instead of the linear smoothing you used in the previous ERSST.v3b data? The support paper for the new NOAA sea surface temperature data, Huang et al (2015), states with respect to filtering as shown in its Figure 5 (my boldface):

The monthly fitting coefficients (gray lines) are shown in Fig. 5, which overall fits the fifth assumption that the biases vary slowly with time. To filter out potentially spurious high-frequency noise in the fitting coefficients, a linearly fitted coefficient was used in ERSST.v3b (Smith and Reynolds 2002). Subsequent to ERSST.v3b several analyses have highlighted the likely presence of substantive multidecadal bias variability throughout the record (e.g., Kennedy et al. 2011) rather than simply around the transition from mainly buckets to mainly ERI measures around the early 1940s. In ERSST.v4, a Lowess filter (Cleveland 1981) has been applied on Ay (Fig. 5) and allowed to vary the bias adjustments throughout the record. A filter coefficient of 0.1 is applied to the Lowess, which is equivalent to a low-pass filter of 16 years and represents the low-frequency nature of the required bias adjustment. The reason to apply a filter is to make the bias adjustment smoother so that it may be more consistent with the assumption of applying a climatological SST2NMAT pattern of Am,y. However, we stress that higher-frequency changes in SST biases are virtually certain to exist as indicated in Thompson et al. (2008), Kennedy et al. (2011), and Hirahara et al. (2014). Shorter windows or use of annually averaged data would be noisier by construction because the estimate at any given point would be based upon a smaller sample and it is not clear at what point there becomes a risk of fitting to random sampling noise rather than systematic bias signal. The preference is for robust estimation of the multidecadal component of the bias adjustments using a coefficient of 0.1 but may come at a cost of accurately portraying biases at times of rapid transition (e.g., the WWII era).

And as illustrated and discussed above, could the filtering you’ve elected to use also “come at the cost of accurately portraying biases at times of rapid transition” in response to strong annual perturbations from El Niño events during the hiatus? Something appears it may have definitely added unnecessarily to the buoy-ship bias adjustments of your new sea surface temperature dataset after 2007.

UPDATE:  See the note at the end of the post.

Judith Curry commented in a recent post here that that the findings of your recent Karl et al. (2015) paper were based on cherry-picked methods:

This new paper is especially interesting in context of the Karl et al paper, that ‘disappears’ the hiatus. I suspect that the main take home message for the public (those paying attention, anyways) is that the data is really really uncertain and there is plenty of opportunity for scientists to ‘cherry pick’ methods to get desired results.

I would tend to agree. The results of the statistical methods used on the earlier version of the NOAA sea surface temperature data (ERSST.v3b) did not provide the results NOAA was looking for now, so NOAA/NCEI, under your direction, mixed and matched methods until they found the results you wanted (ERSST.v4).

I look forward to your reply.

There continue to be comments about my introduction to a quote by Judith Curry in the closing of the post.  See the comments starting here on the cross thread at WattsUpWithThat (WUWT) and the comments starting here on the thread of Tim Ball’s recent post at WUWT.   I apologize for my poor choice of the word “commented” in the lead-in to the quote.  Because Judith Curry didn’t specifically state that Karl et al cherry picked methods, I should have used the word “implied” or “suggested” in place of “commented”.   It should have read Judith Curry commented implied (or suggested) in a recent post here that that the findings of your recent Karl et al. (2015) paper were based on cherry-picked methods: