Last week we pointed out how a study showed pine beetle damaged forests didn’t have a greater burn risk than healthy forests, now this new study shows that the favorite ‘milder winter caused by climate change’ link is overblown. 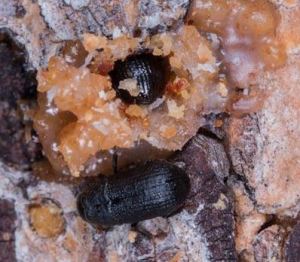 Mountain pine beetles (pictured here) have killed pine forests over more than 140,000 square miles in the western US, but warming winters can’t be blamed for the full extent of recent outbreaks in the region, a Dartmouth College and US Forest Service study finds. Credit Jeff Foott

HANOVER, N.H. – Warming winters have allowed mountain pine beetle outbreaks in the coldest areas of the western United States, but milder winters can’t be blamed for the full extent of recent outbreaks in the region, a Dartmouth College and U.S. Forest Service study finds.

Milder winters have contributed to recent beetle outbreaks in Canada, but this is the first study to evaluate warmer winters as a factor permitting simultaneous outbreaks across the majority of its range in the western United States. In the last 15 years, bark beetles in the western U.S. have killed pine forests over more than 140,000 square miles (about the size of Montana), which exceeds the area killed by forest fires during the same years. Warming winters could be fueling these beetle epidemics, but large-scale tests have been limited and other explanations are possible, such as rising summer temperatures that accelerate beetle development and the legacy of forestry practices.

The findings appear in the journal Landscape Ecology. A PDF is available on request.

The researchers examined the long-term trend in minimum air temperatures across 23 ecoregions in western U.S. forests that have had bark beetle outbreaks and assessed whether increased beetle survival due to warming winters permitted the outbreaks. The results show the coldest winter night has warmed by about 4 degrees Celsius (7 degrees Fahrenheit) since 1960 across Western forests. “This amount of warming could be the difference between pests surviving in areas that were historically unfavorable and could permit more severe and prolonged pest outbreaks in regions where historical outbreaks were halted by more frequent cold bouts,” says first author Aaron Weed, a former postdoctoral researcher at Dartmouth and now an ecologist at the National Park Service.

Despite the trend for warming winters across western U.S. forests, not all beetle populations between 1997 and 2010 have responded to winter warming. In the 11 coldest ecoregions, winter temperatures lethal to the mountain pine beetle have become less frequent since the 1980s and beetle-caused tree mortality has increased significantly in these regions. But in the 12 warmer ecoregions, recent beetle epidemics cannot be attributed to warming winters because earlier winters were rarely cold enough to kill the beetles.

Although winter warming has been occurring across the western United States for decades, it has only permitted mountain pine beetle outbreaks in regions where winters historically killed more than 50 percent of the beetles — primarily in the Middle Rockies (Idaho, Montana and Wyoming), the Blue Mountains in eastern Oregon and northern Colorado. In these regions, winter temperatures during the 1980s were more likely than in recent years to drop below the lower lethal temperatures for mountain pine beetles. But in coastal and southern regions, winters dating back to 1980 were never cold enough to cause substantial beetle mortality. However, these warmer regions are undergoing sustained and, in some forests, increasing impacts from beetles. Other factors — such as warming temperatures that affect seasonal rhythms of beetle development and forestry practices that have influenced forest composition, primarily pine density and age in this case — are necessary to understand the broad extent of mountain pine beetle outbreaks across the western United States, the study finds.