The polar bear attack that was all over the news last summer is now an ebook. 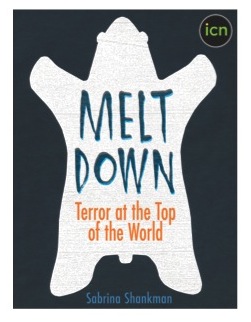 The Maine lawyer who was mauled by a bear while on a hiking trip to Labrador (and lived to tell the tale) has allowed his story to be co-opted by an activist journalist to promote fears of sea ice decline, polar bear extinction, and man-made global warming.

The press release issued yesterday by the news group that published the book and employs author Sabrina Shankman (InsideClimateNews), described it this way:

“A riveting new e-book about the battle between man, beast and Nature in a warming world. Called Meltdown: Terror at the Top of the World, the e-book tells the story of the hikers’ harrowing encounter with a polar bear; of the plight of the polar bear in general, facing starvation and extinction as the sea ice melts and its habitat disappears; and of the Arctic meltdown, the leading edge of man-made climate change.”

I have little doubt the man mauled by the bear was indeed terrified and that his companions were as well. However, that horror is exploited shamelessly in this book as a means to promote anxiety over the future survival of polar bears and instill panic over a prophesied Arctic “meltdown.”

99 thoughts on ““Meltdown: Terror at the Top of the World" — new book exploits polar bear attack to sell fear of sea ice decline”