In northern winter, the Bering Sea, dividing Alaska and Siberia, becomes the most acidic region on earth (in purple) as shown in this February 2005 acidity map in pH scale. Temperate oceans are less acidic. The equatorial Pacific is left blank due to its high variability around El Niño and La Niña events. (Takahashi)A team of scientists has published the most comprehensive picture yet of how acidity levels vary across the world’s oceans, providing a benchmark for years to come as enormous amounts of human-caused carbon emissions continue to wind up at sea. 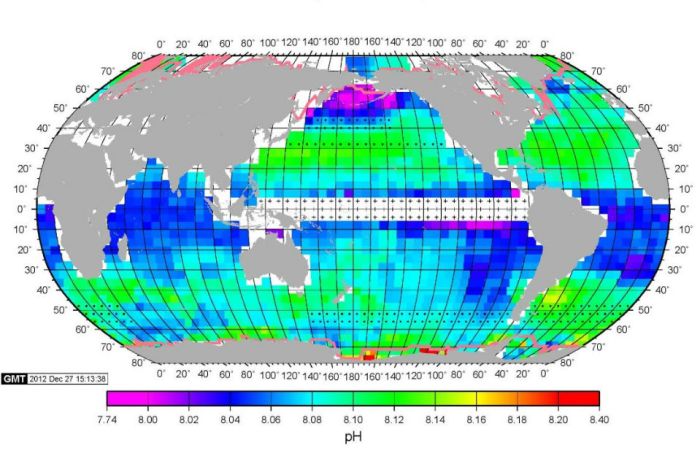 “We have established a global standard for future changes to be measured,” said Taro Takahashi, a geochemist at Columbia’s Lamont-Doherty Earth Observatory who published the maps with his colleagues in the August issue of the journal Marine Chemistry. The maps provide a monthly look at how ocean acidity rises and falls by season and geographic location, along with saturation levels of calcium carbonate minerals used by shell-building organisms. The maps use 2005 as a reference year and draw on four decades of measurements by Lamont-Doherty scientists and others.The oceans have taken up a quarter of the carbon dioxide humans have put in the atmosphere over the last two hundred years.

But their help in offsetting global warming has come at a price: the oceans are growing more acidic as they absorb our excess CO2. To what extent ocean acidification may harm marine life and ecosystems is still unclear, but already signs of stress have appeared in corals, mollusks and other shell-builders living in regions with naturally more acidic water. Since the industrial era began, average surface seawater pH in temperate oceans has fallen from 8.2 to 8.1 by 0.1 pH unit, equal to a 30 percent increase in acid concentration. (A lower pH indicates more acidic conditions.)The saturation state of the mineral aragonite, essential to shell-builders, tends to fall as waters become more acidic. The South Pacific Ocean  is heavily oversaturated with respect to aragonite (in red) while the polar oceans (in blue) are less saturated, as shown in this February 2005 map. The pink lines represent approximate polar sea ice edges. (Takahashi)

Taro Takahashi has spent more than four decades measuring the changing chemistry of the world’s oceans. Here, aboard the R/V Melville, he celebrates after sampling waters near the bottom of  the Japan Trench in 1973. (Lamont-Doherty archives)The vast tropical and temperate oceans, where most coral reefs grow, see the least variation, with pH hovering between 8.05 and 8.15 as temperatures fluctuate in winter and summer. Here, the waters are oversaturated with respect to the mineral aragonite—a substance that shell-building organisms need to thrive.Ocean pH fluctuates most in the colder waters off Siberia and Alaska, the Pacific Northwest and Antarctica. In spring and summer, massive plankton blooms absorb carbon dioxide in the water, raising pH and causing seawater acidity to fall. In winter, the upwelling of CO2-rich water from the deep ocean causes surface waters to become more acidic. Acidification of the Arctic Ocean in winter causes aragonite levels to fall, slowing the growth of pteropods, planktic snails that feed many predator fish. The maps reveal that the northern Indian Ocean is at least 10 percent more acidic than the Atlantic and Pacific oceans, which could be due to its unique geography. Cut off from the Arctic Ocean, the chemistry of the northern Indian Ocean is influenced by rivers draining the massive Eurasian continent as well as seasonal monsoon rains.By analyzing long-term data collected off Iceland, Bermuda, the Canary Islands, Hawaii and the Drake Passage, off the southern tip of South America,

Takahashi finds that waters as far north as Iceland and as far south as Antarctica are acidifying at the rate of 5 percent per decade. His estimate corresponds to the amount of CO2 humans are adding to the atmosphere, and is consistent with several recent estimates, including a 2014 study in the journal Oceanography led by Nicholas Bates, research director at the Bermuda Institute of Ocean Sciences.“This is exactly what we’d expect based on how much CO2 we’ve been putting in the air,” said Rik Wanninkhof, a Miami-based oceanographer with the National Oceanic and Atmospheric Administration (NOAA) who was not involved in the study. “This is an important point for scientists to underscore—these calculations are not magic.”If the current pace of ocean acidification continues, warm-water corals by 2050 could be living in waters 25 percent more acidic than they are today, said Takahashi.

While corals can currently tolerate shifts that big, marine biologists wonder if they can sustain growth at lower pH levels year-round. “In the long run it is the average pH that corals see that matters to their ability to grow and build a coral reef,” said Chris Langdon, a marine biologist at the University of Miami, who was not involved in the study.<Ocean acidification is already having an impact, especially in places where the seasonal upwelling of deep water has made seawater naturally more acidic. In a  recent study by researchers at NOAA, more than half of the pteropods sampled off the coast of Washington, Oregon and California showed badly dissolved shells. Ocean acidification has been linked to fish losing their ability to sniff out predators, and the die-off of baby oysters in hatcheries off Washington and Oregon, where more acidic deep water comes to the surface each spring and summer.By 2100, ocean acidification could cost the global economy $3 trillion a year in lost revenue from fishing, tourism and intangible ecosystem services, according to a recent United Nations report.

The U.S. Government Accountability Office, the watchdog arm of Congress, has reached similar findings and recommended that President Obama create a research and monitoring program dedicated to ocean acidification.Other authors of the study: Stuart Sutherland, David Chipman (now retired), John Goddard and Cheng Ho, all of Lamont-Doherty; and Timothy Newberger, Colm Sweeney and David Munro, all of University of Colorado, Boulder.