Shock news from the Heartland Institute’s Ninth International Climate Change Conference: among the 600 delegates, the consensus that Man contributes to global warming was not 97%. It was 100%. 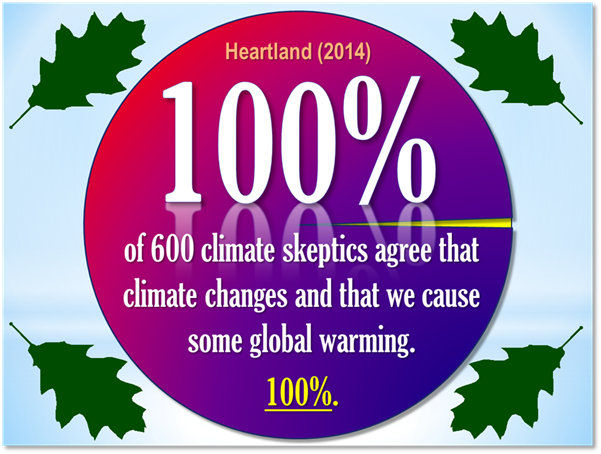 During my valedictorian keynote at the conference, I appointed the lovely Diane Bast as my independent adjudicatrix. She read out six successive questions to the audience, one by one. I invited anyone who would answer “No” to that question to raise a hand. According to the adjudicatrix, not a single hand was raised in response to any of the questions.

These were the six questions.

2. Has the atmospheric concentration of CO2 increased since the late 1950s?

3. Is Man likely to have contributed to the measured increase in CO2 concentration since the late 1950s?

4. Other things being equal, is it likely that adding CO2 to the atmosphere will cause some global warming?

5. Is it likely that there has been some global warming since the late 1950s?

6. Is it likely that Man’s emissions of CO2 and other greenhouse gases have contributed to the measured global warming since 1950?

One of the many fundamental dishonesties in the climate debate is the false impression created by the Thermageddonites and their hosts of allies in the Main Stream Media (MSM) that climate skeptics would answer “No” to most – if not all – of the six questions.

That fundamental dishonesty was at the core of the Cook et al. “consensus” paper published last year. The authors listed three “levels of endorsement” supporting some sort of climate consensus.

Level 1 reflected the IPCC’s definition of consensus: that most of the global warming since 1950 was man-made. Levels 2 and 3 reflected explicit or implicit acceptance that Man causes some warming. The Heartland delegates’ unanimous opinion fell within Level 2.

Cook et al., having specified these three “levels of endorsement”, and having gone to the trouble of reading and marking 11,944 abstracts, did not publish their assessment of the number of abstracts they had marked as falling into each of the three endorsement levels. Instead, they published a single aggregate total combining all three categories.

Their failure to report the results fully was what raised my suspicions that their article fell short of the standards of integrity that the reasonable man on the Clapham omnibus would have expected of a paper purporting to be scientific.

The text file recording the results of Cook’s survey was carefully released only after several weeks following publication, during which the article claiming 97% consensus had received wall-to-wall international publicity from the MSM. Even Mr Obama’s Twitteratus had cited it with approval as indicating that “global warming is real, man-made and dangerous”.

The algorithm counted the number of abstracts Cook had allocated to each level of endorsement. When the computer displayed the results, I thought there must have been some mistake. The algorithm had found only 64 out of the 11,944 papers, or 0.5%, marked as falling within Level 1, reflecting the IPCC consensus that recent warming was mostly man-made.

I carried out a manual check using the search function in Microsoft Notepad. Sure enough, there were only 64 data entries ending in “,1”.

Next, I read all 64 abstracts and discovered – not greatly to my surprise – that only 41 had explicitly said Man had caused most of the global warming over the past half century or so.

Now that we have the results of the Heartland Conference survey, the full extent of the usual suspects’ evasiveness about climate “consensus” can be revealed.

In defiance of the evidence recorded in their own data file, they had then explicitly stated, both in their article and in a subsequent article, that 97.1% had endorsed the IPCC’s proposition.

Amusingly, 96.8% is 97% of 97.1%. In other words, 97% of the abstracts that formed the basis of the “97% consensus” claim in Cook et al. (2013) did not endorse the IPCC’s definition of the consensus, as the article had falsely claimed they did. However, those abstracts did endorse the more scientifically credible Heartland definition.

Among the unspeakable representatives of the MSM who came to the Heartland conference to conduct sneering interviews with climate “deniers” was a smarmy individual from CNN.

He asked me, in that supercilious tone with which we are all too familiar, how it was that I, a mere layman, dared to claim that I knew better than 97% of published climate scientists. I referred him to Legates et al. (2013), the peer-reviewed refutation of the notion that 97% of scientists endorse the IPCC’s assertion that most of the warming since 1950 was man-made.

The CNN reporter said that the result in Legates et al. was merely my “interpretation”. So I pointed to a row of internet booths nearby and said, “If I count these booths and find that there are, say, 12 of them, and if you count them and find there are indeed 12 of them, then our finding is not a matter of interpretation. It is a matter of fact, that any third party can independently verify.”

I challenged him to go away, before he broadcast anything, and count how many of the 11,944 abstracts listed in the Cook et al. data file were marked by the authors themselves as falling within Level 1. If he counted only 64, I said, then his count would accord with mine. And our counts would not be an “interpretation” but a fact, whose truth or falsity might readily and definitively be established by any third party performing exactly the same count as ours.

He said he would check, but with that look in his eye that seemed to speak otherwise.

The results of my survey of the 600 Heartland delegates reveal that the difference between the Thermageddonites and us is far less than they would like the world to think. Like most of them, we fall within Cook’s endorsement levels 2-3. Unlike them, we do not claim to know whether most of the global warming since 1950 was man-made: for that is beyond what the current state of science can tell us.

You may like to verify the results recorded in Cook’s data file for yourself. I have asked Anthony to archive the file (it resides here: cook.pdf ).

[UPDATE: David Burton writes:  I’ve put the Cook 2013 data into an Excel spreadsheet, which makes it a lot easier to analyze than from that cook.pdf file.  There’s a link to it on my site, here: http://sealevel.info/97pct/#cook ]

If the reporter from CNN who interviewed me reads this, I hope he will perform the count himself and then come back to me as he had undertaken to do. But I shall not be holding my breath.