I might have had something to do with this:

The group sent a message on Twitter Tuesday with a photo of a “climate denier award” trophy, topped by a unicorn. The group’s volunteers are delivering the statues to lawmakers Tuesday.

Get a load of the photo.  Their choice of a unicorn pretty much sums up their views of the science, that if we solve global warming, it will be rainbows and unicorns on Earth again. 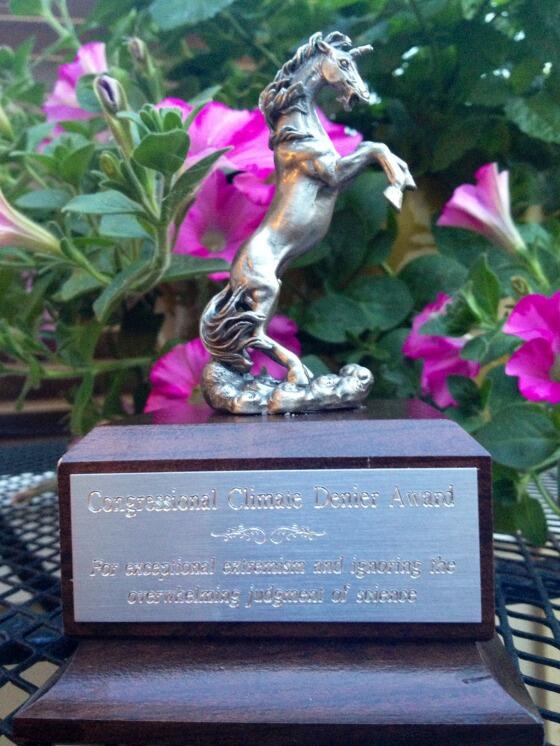 Today is Organizing for Action’s big climate change day. They intend to march out into the public square and attack members of Congress, conservatives, and others who aren’t in on their campaign to destroy capitalism in the name of global warmer … errrr … climate change. Key to this is getting OFA members to Republican town halls, etc. to harass a targeted list of Congressmen.

Right on cue, MSNBC has joined the effort. MSNBC, more and more the official mouthpiece of the Democratic Party, has up a list of Republican members of the House Science Committee who are dismissive of the left’s global warming … errrrrrr … climate change hysteria.

Barack Obama, or whoever runs his Twitter feed, isn’t interested in science. They’re interested in being that guy — the half-informed, argumentative dope who becomes such a pest that you end up unfollowing his feed.

[115 people including Mann, Revkin, Schmidt, Tobis, and Zivkovic; I don’t see any skeptics]

This two-day event is not your traditional climate science meeting. With an un-conference format that is driven by participants and emphasizes conversation, ScienceOnline Climate will explore the intersection of climate science, communication, and the web. Complex scientific concepts will be interwoven with creative communications approaches through the connective power of the internet. It will be an energizing experience for scientists, journalists, artists, policymakers, and attendees from all nodes of the climate communications ecosystem.

Here is your chance to register:

h/t to Tom Nelson for the above three stories.

To me, this seems like a ridiculous idea. How will they know when the person has the phone in their pocket, warming it up?  I can’t even begin to imagine how they’ll untangle the myriad of potential biases the cell phone owner could introduce.

Crowdsourcing weather using smartphone batteries A group of smartphone app developers and weather experts developed a way to use the temperature sensors built into smartphone batteries to crowdsource weather information. These tiny thermometers usually prevent smartphones from dangerously overheating, but the researchers discovered the battery temperatures tell a story about the environment around them.