So far, the first evidence I’ve seen of a bear ashore in Western Hudson Bay was one photographed near Churchill Manitoba on 28 June (below).

However, by 5 July, the first of six collared females from Andrew Derocher’s WH study (below) had also come ashore, as did others along the shore of Wapusk National Park. This is not ‘early’ – just earlier than the last few years. Like last year, however, there is still a fair amount of sea ice left on the bay and some bears seem to be choosing to stay out longer on what ‘experts’ describe as unsuitable habitat. As you can see on his bear tracker map, Derocher uses a filter that shows only ice >50% concentration because he and his buddies have decided that bears so dislike anything less that they immediately head to shore as soon as ice levels fall below this threshold.

While Derocher’s own data since at least 2015 have shown this is not correct (both on Hudson Bay and elsewhere), he and his colleagues still insist this is the pattern that should prevail (and which they use in their models), a topic which I discussed last year (with references).

There is actually a lot more ice on the bay than shown in Derocher’s tracking map: see the chart from the Canadian Ice Service below:

The ice that’s still on the bay is primarily thick first year ice > 1 m. thick (below), which is less than there was last year at this time but nowhere near any kind of catastrophic level (which would have been no ice at all throughout all of May):

Bear captured on film chilling out near Churchill on 5 July 2021:

Apparently two sets of mothers with one cub were spotted the same day (5 July) on the shore of Wapusk National Park just south of Churchill, captured by the Explore.org live cam (the photos are blurry because the camera is very far away from the beach):

Another single bear was spotted the next day (6 July):

Watch out for ecotourists–they carry guns and set up bad situations for the bears.

Could they please be directed toward Mikey Mann’s ice cave at Penn State?

While Mann is asleep, just as a practical joke, sneak an anesthetized adult bear into his basement and a seal in his master bedroom. Then, when they wake up, oh what a hoot.

Not nice! But just out of pure scientific curiosity, which blubber do you think the poley bars prefer?

That’s easy.
The blubber in which it has sunk it’s teeth.

Which source of blubber? The slowest, of course.

yeah you are right

Oh ok, so it’s the data-torturing doofus then. 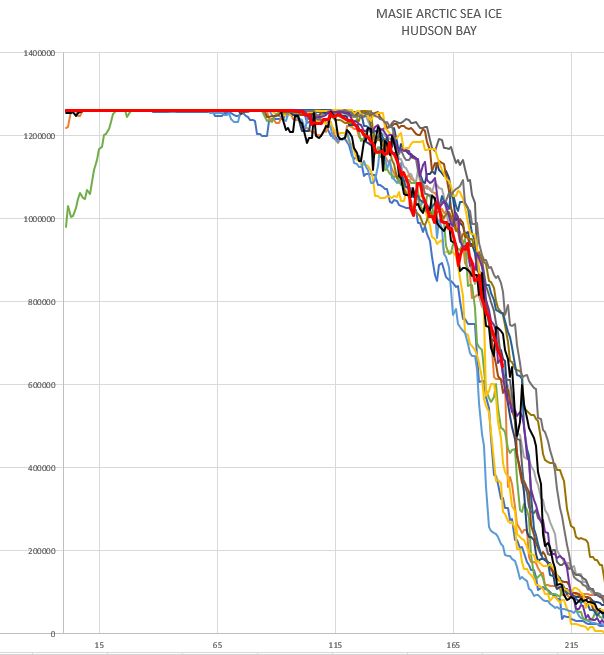 While Derocher’s own data since at least 2015 have shown this is not correct (both on Hudson Bay and elsewhere), he and his colleagues still insist this is the pattern that should prevail

How typical of climate science. The “scientists” decide ahead of time what the data should be.
If the actual data fails to live up to their expectations, it’s either ignored, or adjusted until it does.

Just a passing thought … Has anyone ever asked Derocher face-to-face why he insists on the <50% standard when his own research (such as there is) demonstrates it isn’t true?

He gets paid for fear-mongering. The more he cries “woe for the poor polar bears”, publicly rends his clothes and covers himself in ashes (so to speak!), the more money is sent to the usual suspects and it is likely that Derocher will get his research grants to help the poor polar bears for the next few years. Derocher’s situation is the epitome of vested interests; it’s a disgrace.

“Derocher uses a filter that shows only ice >50% concentration“

Sea ice still declining: bears will be impacted by that.

Did you not know that for nearly all the last 10,000 years, there has been a lot less Arctic sea ice than there is now?

Did you also not know that polar bears are doing exceptionally well because there is less sea ice than in the extreme cold of the late 1970s when they had so far to travel to find the edge of the ice.

Did you also not know that Arctic sea life is returning after a long absence due to too much sea ice during the Little Ice Age?

Seem you make a habit of not knowing !

griff only knows what they are paid to know.

Griff is, most assuredly, not paid to post here – his comments are too lame.
He never adds anything to the discussion.
Just another ignorant troll.

Meaning something drives giffie poo’s irrational attendance and ignorant commentary. A paid trollop is the most likely reason, as it’s income depends on its continued ignorance.

If I were paying for that, I would feel cheated.

Second lowest since when, griff? Not holding my breath for a reply!
If sea ice is still declining the bears will love it. Much easier to catch seals on land! What’s not to like? Unless you’re a seal, of course

Griff, how long is your record?

It doesn’t matter how long his record is because the needle is stuck !

“At this time of year” the ice has been almost exactly the same for the last decade. Differences only show up in mid winter or mid summer.

For the last 4-6 weeks it’s been just slightly less ice than 2007. All through the winter is the same as 2007. That’s the year of AR4 when everyone started screaming about “run-away melting”, “death spirals” an imminent “ice free” Arctic ocean.

For a critter than can swim hundreds of miles and depends on easy to punch through ice, yes, there will be an impact.
It’ll be easier for them to get food. That’s not a bad impact now is it?

All change is bad and proof that we need to shut down capitalism. Does that help you understand?

griff old buddy, old pal. How is it that you rudely refuse to answer when we ask you if you would have preferred to live during the little ice age when CO2 was so low and benign, rather than the horrific current period of dangerous CO2?

And while we’re on the polar bear topic, doesn’t that jog your memory about any apologies you owe to Dr. Crockford?

How about it griff? Get it over with so we can move on?

Griffie-poo, we’re still waiting for you to explain how Polar Bears made it through the Holocene Thermal Optimum, during which the Arctic Ocean was seasonally ice-free.

Oh, and we haven’t forgotten how you smeared and defamed Dr Susan Crockford.

Your LP has a massive crack……

That’s not the crack he speaks from

Regardless, arctic ice extents are still millions of square miles greater than the 2012 low.

Just checked NSIDC and you are still a liar.

“As you can see on his bear tracker map, Derocher uses a filter that shows only ice >50% concentration because he and his buddies have decided that bears so dislike anything less that they immediately head to shore as soon as ice levels fall below this threshold.”.

3 of the 5 bears shown still in the bay appear to be on less than 50% ice. Seems to me that’s pretty good evidence that Derocher is wrong.

It’s not evidence that Derocher is wrong, it’s evidence that those particular polar bears weren’t properly socialized by their mothers and don’t know to come in when it’s time for them to come in.

“…what ‘experts’ describe as unsuitable habitat.”
Then they should argue it out with the Polar Bears, and anyway, what do Polar Bears know as they have no recognized qualifications?

Yeah griff, wuddabout that? Here’s your opportunity to display your misogyny and malign Dr Crockford by saying she only knows as much about polar bears as the uncredentialed polar bears themselves.

Looks like the researchers are sexist: why no males tracked?

Isn’t Wapusk National Park at the extreme southern (historical) edge of the range for Polar Bears?

Is it me or is that bear smiling?

So, this researcher has stated his conclusion and then makes up things to “support” it.