Help NASA Design a Robot to Dig on the Moon 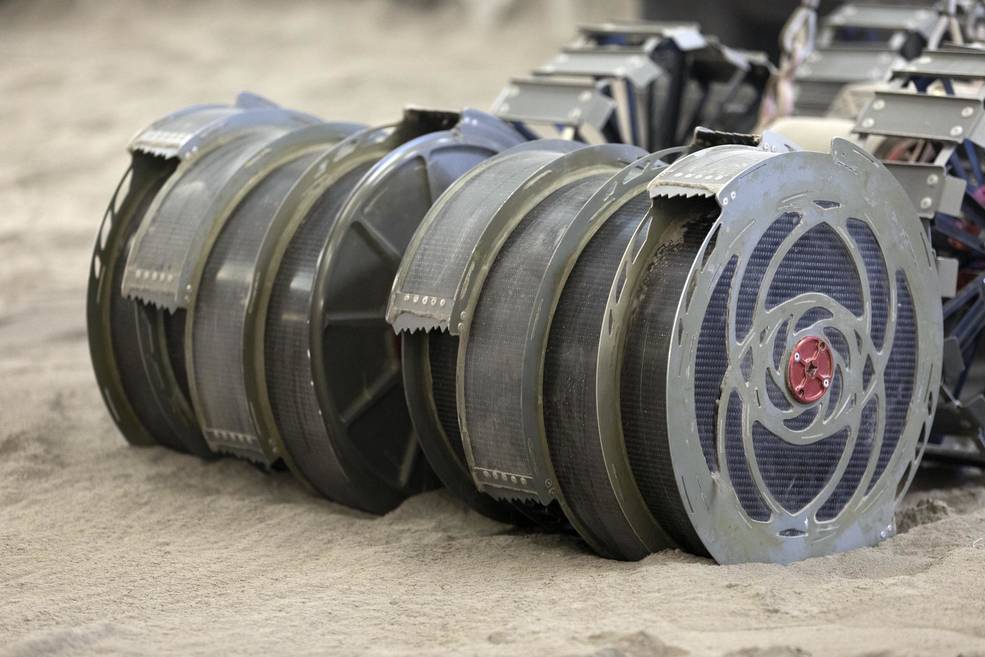 A close-up view of the bucket drums on Regolith Advanced Surface Systems Operations Robot (RASSOR) in the regolith bin inside Swamp Works at NASA’s Kennedy Space Center in Florida on June 5, 2019.

Digging on the Moon is a hard job for a robot. It has to be able to collect and move lunar soil, or regolith, but anything launching to the Moon needs to be lightweight. The problem is excavators rely on their weight and traction to dig on Earth. NASA has a solution, but is looking for ideas to make it better. Once matured, robotic excavators could help NASA establish a sustainable presence on the Moon under the Artemis lunar exploration program, a few years after landing astronauts on the surface.

Engineers have tested various configurations of a Moon-digging robot called RASSOR – short for Regolith Advanced Surface Systems Operations Robot – in a large lunar simulant sand box at NASA’s Kennedy Space Center in Florida. Now, NASA is asking the public to help design a new bucket drum, the portion of the robot that captures the regolith and keeps it from falling out. The regolith can then be transported to a designated location where reverse rotation of the drum allows it to fall back out.

RASSOR’s current bucket drums are hollow cylinders positioned on either end of the robot, with scoops around the circumference of the cylinders. The robot digs in opposing ends toward the other, which balances the excavation forces and makes it easier to dig.

NASA’s RASSOR Bucket Drum Design Challenge is open through April 20, 2020. The challenge, sponsored by NASA’s Space Technology Mission Directorate (STMD), seeks a better shape for RASSOR’s bucket drum and baffling, or sheet metal inside of it that can capture and hold more regolith. GrabCAD, a website people can join and post 3D models of almost anything, hosts the challenge and eligible individuals, with an idea can submit original designs that have not been previously published, exhibited or put into production for this important part of RASSOR.

“We’ve held challenges on GrabCAD in the past and they were very successful,” said Jason Schuler, a robotics engineer in the Exploration Research and Technology Programs at Kennedy. “As a repository for computer-aided design, the platform helps us reach professional designers, engineers, manufacturers and students outside of the space industry who may have an idea that could benefit NASA.”

Successful designs for this competition will have a fill ratio of higher than 50%, which means the design’s interior volume will be more than half full with regolith when it reached the maximum amount it can hold.

“With RASSOR, we’re no longer relying on the traction or the weight of the robot. It is possible to excavate on the Moon or Mars with a really lightweight robot,” Schuler said.

“RASSOR is excavation and transportation all in one, but we’d like to improve the design.”

At the end of the competition, the design entries will be judged on a set of criteria, including width of the scoops, bucket drum mass, diameter and length, volume of regolith captured and practicality of the design. In addition to the CAD files, entries must include a short description of how the design works.

A total of $7,000 will be awarded for the top five submissions. For more information about prize amounts and how to enter, visit:

The challenge is funded by NASA’s Lunar Surface Innovation Initiative within STMD, which champions technologies needed to live on and explore the Moon. NASA Tournament Lab, part of STMD’s Prizes and Challenges program, manages the challenge. The program supports the use of public competitions and crowdsourcing as tools to advance NASA R&D and other mission needs.

Learn more about opportunities to participate in your space program via NASA prizes and challenges: www.nasa.gov/solve

Artemis includes sending a suite of new science instruments and technology demonstrations to study the Moon, landing the first woman and next man on the lunar surface by 2024, and establishing a sustained presence by 2028. The agency will leverage its Artemis experience and technologies to prepare for the next giant leap – sending astronauts to Mars. RASSOR is a technology project being developed by Swamp Works at Kennedy that could be used on the Moon or Mars.

I think JCB has cornered the market on diggers. Getting one to the moon, ask Musk!

JCB only had a market corner where the EU said they could sell. Failure to comply resulted in a large fine. Since the UK resigned from “Europe” JCB will find many new markets.

Can’t help them design but can help them advise. Don’t go. Save the money.

Makes more sense to push the dirt away from the rover, doesn’t it? ;^)

Yes, otherwise your pushing stuff into your drives. You also are pushing down on the machine instead of it climbing over your pay dirt. And if there is something too big to fit in the bucket it will be pushed forwards and eventually fall to the side.

As for adding weight, a simple hopper could be filled with material once on site.

Depends how deep you want to go. The moons surface will be heterogeneous with fine dust and large metallic boulders and everything in between.
Do it as an open cast mine, I.e an open circular pit.
Quickest results would be to drill as deep as possible and then explode a WD 60 Atomic bomb ( yield 0.25 Megatonne)
Avoid mechanical parts. Moon dust is likely to be very fine with an electrostatic charge. A real pain to clean.

From the article: “With RASSOR, we’re no longer relying on the traction or the weight of the robot. It is possible to excavate on the Moon or Mars with a really lightweight robot,” Schuler said.”

It shouldn’t be all that hard to add some weight to the vehicle after it arrives at its destination.

I suppose the real objective is to develop a lightweight excavator because of a limited power source. With unlimited power available, you could just do it the old-fashioned way.

I’m liking all these new Moon inititatives. It makes it seem like some progress is being made towards actually putting people back on the Moon.

The US has a very large and successful Oil & Gas industry that has drilling rigs drilling hundreds of wells every day. Drilling shallow horizontal wells requires pull equipment. Equipment on the moon needs to be anchored and a solar powered electric motor and bit should be able to drill very shallow wells. Adding drill pipe would be a challenge.

As a mechanical design engineer low gravity digging could be overcome with some light weight earth screws to screw into the soil, then dig to your hearts content.

As a farm worker in 1949, official title was a Trainee Manager. I recall seen the big Ford Tractor, which used its immense weight to cause the plough to go below the suface, then the farmer bought a Fergusen tractor, tiny compared to the Ford, which used the design of the plough to pull down the wheels of the tractor.

So design the wheels or a form of the Ferguson plough to force the machine to drill into the surface.

What We Learned from the Space Station this Past Year

Merry Christmas Earth, You Get a New Telescope

What Solution Do Renewable Energy Advocates Offer For The Problem Of Storage?