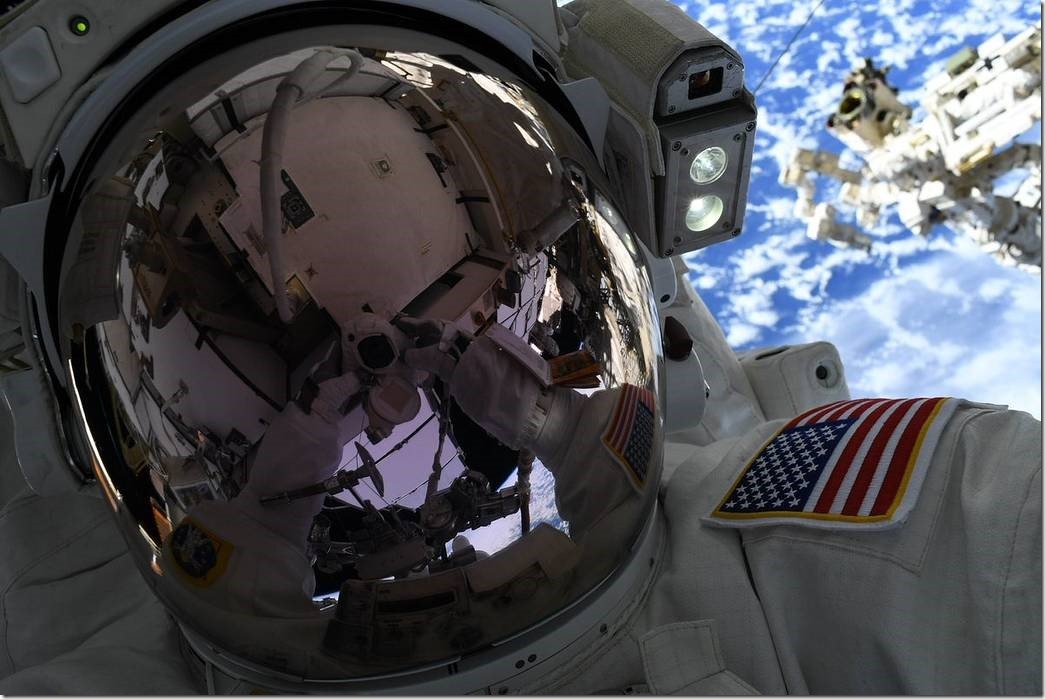 NASA astronaut Nick Hague completed the first spacewalk of his career on Friday, March 22, 2019. He and fellow astronaut Anne McClain worked on a set of battery upgrades, on the International Space Station’s starboard truss. In a Facebook post, he wrote: “Big thank you to the ground team down in Mission Control at NASA’s Johnson Space Center, who supported Anne and I with our first #spacewalk on Friday. They are the ones who really make it possible to walk among the stars!”

Wish I could have been there!

I don’t know. After all it is cold outside. There’s no kind of atmosphere. Your all alone, more or less.

“I don’t know. After all it is cold outside. There’s no kind of atmosphere”:

Bring your own respiration box to the site.

What’s this NASA doing what it was set up to do?
But also this is way cool well done to those who have kept the “space” light burning at NASA.
I can remember sitting watching the moon landings and dreaming of being there, never missed one if at all possible. And don’t forget Skylab a wonderfully bit of re purposing when the politicians had lost interest in their new toy.

“I can remember sitting watching the moon landings and dreaming of being there, never missed one if at all possible. And don’t forget Skylab a wonderfully bit of re purposing when the politicians had lost interest in their new toy.”

Vice President Pence just announced that the U.S. wants to put people back on the Moon by 2024.

Skylab, I remember it well. America’s first space station. Constructed out of an empty propellant tank built for the Saturn 5 launch vehicle.

Skylab was the perfect way to economize on space development by using already-available hardware.

The Space Shuttle could have put an empty propellant tank in orbit that was even bigger than Skylab. That would be the large, orange External Tank (ET) to which the shuttle was attached at launch. Had NASA so desired, instead of dropping the ET back into the atmosphere to burn up after launch, the shuttle could have remained attached to the ET, and the shuttle had enough power to put both the shuttle and the ET in orbit.

One ET would have had more volume than the International Space Station. The ET was 27 feet in diameter and 154 feet long, and contained a tank for the hydrogen and a separate tank for the oxygen. NASA launched 133 External Tanks.

NASA decided not to go the Skylab route during the space shuttle era, although they had a certified design for using the ET in orbit called Option C, when they were deciding on what kind of space station to build in the early 1990’s.

Option C would have only required about four launches of the shuttle to complete the space station. Whereas, Options A and Option B both required dozens of shuttle launches before completion because those two designs used space station modules carried inside the space shuttle cargo bay, so they were much smaller than the ET and required many more launches to equal the volume of an ET, not to mention numerous space walks required to assuemble in orbit.The ET space station required just a few space walks before final completion.

The ET space station was mostly comleted when it first reached orbit since a fully-outfitted habitation module (15 feet long by 27 feet in diameter) was attached to the bottom of the ET at launch. The only thing the ET space station needed after the initial launch was the placement of solar panels.

Unfortunately, NASA management at the time thought that rather than doing space development as inexpensively and quickly as possible, it would be better for the NASA bureaucracy to choose a design that required the maximum use of the Space Shuttle.

This would keep their gravy train going for as long as possible, so the choice was plain: the space station option that required the most launches of the shuttle and that definitely was not the ET space station which could be completed with about four launches.

So NASA management could have maximized the use of the shuttle while pursuing a vigorous space development program using the ET as a basic building block, but they chose to piddle around in low-Earth orbit for decades, and to top it all off, they threw away the Space Shuttle heavy-lift launch system and are trying to replace it by spending billions more dollars to produce a vehicle that is no more capable (less capable, imo) than the space shuttle launch system.

The answer is of course, free enterprise space development. At last we are on this course, and now Trump and Pence have jumpstarted the human race back to the Moon, featuring private space development companies.

Back to normal, then? I sure hope so.

This was supposed to be the first all female EVA but apparently they have only 1 medium spacesuit? I thought that their needed to be a suit for every astronaut in case of emergencies. If they suffer a pressure loss, do both women have to share the suit?
Sounds like bad planning.
She should have come up in her own suit, perhaps it was at the cleaners??

0
michael hart
Reply to  Bryan A

Perhaps it was the wrong color.
I’m done for now, aren’t I?

She should have come up in her own suit, perhaps it was at the cleaners??

She thought her own suit made her look fat.
Running away……

My understanding is that Anne McClain was expected to use a large upper torso unit, but found that after several months in space, a medium fit better. There is a second medium unit on the ISS but rather than wait to get it ready they simple decided to switch crew to meet schedule. No big deal.
Also, EVA suits are different from emergency pressure suits, being hardened for exterior use.

Not plausible. Ideal weight is a standard in space so weight does NOT substantially change. Caloric needs are down to the gnat’s medium sized ass. Something else is going on.

Also, apologizing in advance…
Anne McClain was expected to be on this space walk…but she had nothing to wear.

Something is fishy here. The first space walk by an all female excursion was canceled because they didn’t have an extra suit top size medium ready in time for both females. Really? They have two females but came with only one suit? And it appears they might have one ready later? What. Do they have a Butterick pattern for this top? A sewing machine? Fabric? And a grandma on board who can sew?

A guy I went to high school with has a picture of himself that’s nearly identical. If I would’ve known then that I was sitting by a future astronaut, I would’ve freaked out, being the astronomy nerd I was back then.

NASA to Set Up Independent Study on Unidentified Aerial Phenomena

Is Lake Mead Shrinking Because of Climate?

Sri Lanka Food Shortages Due to Fertilizer Ban, (Not Putin)