In April 2006, a Boeing Delta II rocket launched CloudSat, along with a second satellite, CALIPSO, into space on two- and three-year missions to study the world’s clouds and a mix of airborne particles called aerosols.

Twelve years later, both satellites are still chugging along, though it hasn’t always been easy going in recent years. In CloudSat’s case, it is only because of a series of orbital maneuvers and other technical fixes that the satellite is still returning useful science data in the twilight years of its mission. 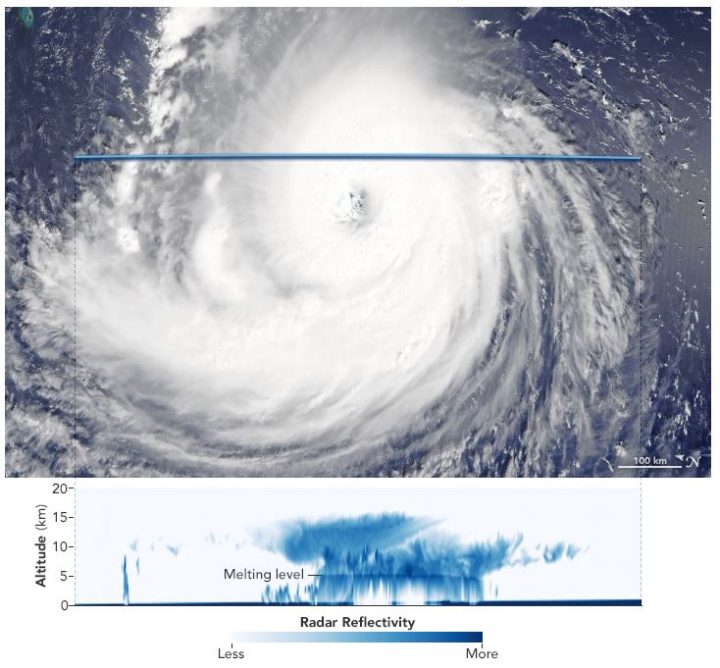 One of CloudSat’s most recent acquisitions—a view of the inner structure of Hurricane Florence as the storm took aim for the Carolinas—underscores why the mission is worth the engineering effort. This natural-color image shows how Hurricane Florence appeared from above to the Moderate Resolution Imaging Spectroradiometer on the Aqua satellite on September 11, 2018. The second image, acquired by CloudSat on the same day, shows a cross-section—how the storm would look if it had been sliced near the middle and viewed from the side. The blue line is the north-to-south track that CloudSat flew over Florence. Note the MODIS image has been rotated.

The CloudSat pass offers a unique view of Florence’s asymmetrical structure, the intense convection and rainfall churning inside the storm, and the complex vertical cloud structure that is not visible from above. The storm’s clouds reached an altitude of about 15 kilometers (9 miles) at their highest point—fairly high for a tropical cyclone.

The darkest blues represent areas where clouds and raindrops reflected the strongest signal back to the satellite radar. These areas had the heaviest precipitation and the largest water droplets. The blue horizontal line across the data is the melting level; ice particles were present above it, raindrops below it. Note how the radar detects more signal immediately below this line. “It almost looks like two images were pasted together and not matched very well,” said Philip Partain, a researcher at Colorado State University who helped design CloudSat’s data processing system. “That’s because falling ice crystals become coated in water as they pass the melting level and become very reflective to the radar.”

With its 94 GHz radar, CloudSat does not measure patches of the heaviest rainfall well. “Very heavy rain weakens the signal, and we can’t get good measurements in those areas,” continued Partain. “You can see that happening in the image where the signal from the ocean’s surface, which is obviously highly reflective outside the storm, disappears in the center of the storm.”

However, CloudSat has some allies on its mission to study Earth’s clouds from above. NASA’s Global Precipitation Mission (GPM) has a complementary radar tuned to a slightly different wavelength that excels at making measurements of the heavy rains found in the heart of tropical cyclones. See this visualization to see GPM’s view of intense rainfall within Florence on September 7, 2018.

CALIPSO, the satellite that launched alongside CloudSat, also collects complementary measurements, but of especially fine-grained particles and droplets that are difficult for both CALIPSO and GPM to detect. For several years, Cloudsat and Calipso flew near each other as part of NASA’s A-Train of satellites, a strategic type of formation-flying designed to maximize the scientific value of the data collected by the participating satellites.

In February 2018, Cloudsat mission engineers at NASA’s Jet Propulsion Laboratory in Pasadena, California, executed two thrusters burns that lowered Cloudsat’s orbit out of the A-Train following the loss of one of four reaction wheels, devices that help control the spacecraft’s orientation in orbit. The maneuvers lowered CloudSat’s orbit from 705 kilometers (438 miles) above the surface to 688 km.

“The spacecraft is flying now in what we call the graveyard orbit,” said Partain. While mission planners hope to see Cloudsat continue to collect data through 2022, small problems can become big problems with a satellite of such an advanced age. “We don’t have much room left for error at this point,” said Partrain. “At any point, we could lose the battery, the radar, or another one of the reaction wheels.”

At least Cloudsat won’t be flying alone during its golden years. The scientists and engineers who manage CALIPSO decided to ease that satellite out of the A-Train and into an orbit near CloudSat, making it possible for CloudSat and CALIPSO to continue making coincident measurements as they long have. By late September, CALIPSO will have resumed its familiar position about 4 kilometers ahead of CloudSat, just like the two satellites flew for years as part of the A-Train.

“Every satellite has its blind spots and no satellite will last forever,” said Natalie Tourville, a Colorado State University scientist who has been compiling a database of CloudSat overpasses of tropical cyclones in order to better understand the anatomy and behavior of the storms. “But my fingers are crossed that CloudSat will deliver many more storm overpasses as impressive as this one in the coming years.”

Traditional understanding of storm structure is clearly evident from these satellites.

It looks like this unprecedented storm that wouldn’t have occurred if Trump wasn’t elected President will landfall as a Cat 1 or perhaps a weak Cat 2 storm.

Its Nature at its v ery impressive best.

They’ve probably already modelled the death toll from Florencia, at around 12,392 plus or minus 4, so President Trump was just getting warmed up in Puerto Rico. It’s the water that kills in big hurricanes, not the wind speed, unless Trump is President, then it is federal government misconduct that selects out and kills the most innocent, like Democrats. Where’s that hot water Nick was talking about?

I think, could be wrong, that the ocean is actually less hot this year than the last 2. This should mean more frequent less intense hurricane risk. Nick was talking hot air arising from the hot water?

NO doubt all deaths will be folks of color, kids, and woman. The white males will be spared.

CNN Is fake news always playing the race card. Vote Republican in November. If you enjoyed the video please like and pass it on…

It’s the rip waves from storm surges that exhaust and kills in the end.

Thats good’.
“this storm is what climate change looks like. Climate change increases the risk of this kind of storm. Hurricane Florence is what global warming looks like.”
are the sort of comments that were being attributed when it was category 5.
Only by luck has it downgraded.
Hopefully it will continue to abate both in wind and water damage.
Will it be used as a poster girl for global warming if it loses it’s kick?
I fear not.

I think you’ll find that WXcycles was being sarcastic! 😉

FOX news now has Florence listed as CAT 1 with winds of 90 mph.

Disappointing to many liberals i am sure.

Trump got the blame so surely he deserves credit for weakening the storm from a Cat 4 to a Cat 1. His power is awesome!

Glad to see tax payers getting a good return on investment! Keeping older systems running is an art form.

Nice view of the hurricane where you can clearly see the high Cirrus cloud extending out to the leading edge of the storm.
lt was this high Cirrus “mares tails” that gave the sailors in the old days of the sailing ship a early warning of the approach of a storm. When back in those days the only other forecasting tool they would have had was the weather glass.

This looks like an ugly beast – my thoughts go out to all in its path.
Stay safe – bruce

Off topic: For those of you who have noticed
http://sealevel.colorado.edu/
is back up (they’ve been off line since August 15th) and still on 2018 rel_1

It would be useful to build such satellites with the capability for in-orbit refueling. I know we can’t do it today, but there are commercial companies attempting to acquire and use resources found in space, rather than haul everything up from Earth’s surface. Planetary Resources is one, and the economics makes a lot of sense for in-orbit refueling, but only if the satellites have the capability for such a mission.

I agree with that and think that a maneuverable orbiting station could be built to capture, refit or repair, refuel and relaunch satellites. Too bad tractor beams are not yet reality. Think of the publicity SpaceX could get from giving new life to old satellites, and even bringing one back to display with Elon Musk’s other trophies.

We used to have something like that. I think it was called the space shuttle.

Awesome science, from a ‘long in the tooth’ satellite!

OMG category ONE already!
It’s worse than we thought – CNN promised us a CAT 5, boo hoo!
Time to fall back on all that rain.

I wonder if any local residents can verify this;

Here is another storm to keep an eye on;

Be ironic if it hit the coast as a Trump Decision (er, Tropical Depression) and we began another 12 period of no hurricanes on the US coasts.

The storm will cause floods even in the northwest US.

You forgot the /sarc

Sorry, I made a mistake, the Northeast US.

However, this storm does not equal typhoons in the Pacific. Inhabitants of the islands have nowhere to run.
26W MANGKHUT
As of 00:00 UTC Sep 14, 2018:
Maximum Winds: 150 kt
http://www.ssd.noaa.gov/PS/TROP/floaters/26W/flash-vis-long.html

Science and engineering working together – wonderful

So President Trump did a deal with God, and reduced the intensity of this storm.
That’s why we elected him, he has a direct line to God. And God always answers his calls!
MAGA

Evacuation was needed because the hurricane moved along the coast. Rain and flow can undermine the foundations of houses.

WUWT is a great PLATFORM that can endure even controversial views.

Claim: Democrats Stayed True to Climate Action Because They Resisted Offers of Money

Claim: Antarctica’s Ice Shelves Could be Melting Faster Than We thought

A Drought in Germany Gets the Media Overexcited