. . .”Moreover, the increasing aerosol loading because of frequent human activities has resulted in decreasing solar radiation in the past few decades (Cheng et al. 2005; Norris and Wild 2009; Tie and Cao 2009; Tang et al. 2011). The decreasing solar radiation could be the potential reason for the downward temperature trends at most stations in mainland China, which is consistent with previous studies that revealed a warming hiatus since the late 1990s (Li et al. 2015; Xian and Fu 2017; Xie et al. 2017). According to Clausius–Clapeyron equation, the downward temperature trends result in decreasing saturation vapor pressure, which gives rise to decreasing atmospheric water-holding capacity. Consequently, APW shows downward trends in four regions of mainland China in the recent 18-yr period analyzed.”

Okay so China has been contributing to global warming while driving regional cooling. It will continue to do so until it starts to do otherwise in 2030. This is while developed countries pay now for past sins of emissions while importing more and more goods from the licensed sinner(s). We need another Obama or Clinton to explain all of this while catching up on sinner payments to the current sinners and imposing the sinner carbon tax “out of the abundance of caution” and to “never let a good crisis go to waste.”

Except they’re doing it the other way around.

I have been studying some of the long term Asian temp graphs recently. It looks to me as if Asian cooling precedes European cooling when a hemispheric cyclical cooling process gets underway. The above study could then in that light be indicating that a NH cyclical cooling pattern is already underway. North America and Europe should feel that cooling cycle next.

Yes, I had also found what I thought of as a wave effect in the NH during cyclical cooling trends. That came from studying long term regional graphs, and my inner thoughts responded with the thought of a wave effect. I mentioned it several times here at WUWT at the time, but never had any response to the thought. That was almost a year before the Stadium Wave was floated as an idea.

Earlier this year I made mention of the Stadium Wave at Curry’s site. To my surprise she responded that they no longer give weight to it. I still think that it is a real phenomenon, part of what takes place during a Gleissberg or gsm. I think that we will soon witness this in real time from my perspective of how this fits into the cyclical climate patterns. Or I will find that my speculative thoughts were incorrect.

Also of note in regard to China/Asia, last winter the Siberian cold wave descended into Asia early in the winter, and held in place for some time. It was amazing to watch at the height of that that the freeze line dropped all the way down through China to the South China Sea for a short period of time. I have daily pics saved of the entire winter’s effects emanating from Siberia over the last 2 winters. I did that after watching the prior two winters, and it became clear to me that a sea change in climate was underway. I would bet that Europe will bear the brunt of this cold pattern in this upcoming winter.

Several points of interest to watch for, first will the Greenland melt season once again end very early as it did last melt season on August 15th or close to that date. I actually forecast that correctly in April of last year. Secondly, will the Siberian cold wave form up early as in mid October give or take a few weeks, as it did two and 3 years ago. It did not form so early last season. In the previous cases when it formed early on is when Europe was hit with some very cold winters. I think this is how the cyclical cooling patterns first show themselves to be in play. We will all see if this is right in around 90 days from now.

So aerosols cause cooling… hmmmm. In the 1970’s, scientists were proclaiming the coming ice age, because sulates+aerosols would reflect away sunlight and cool the earth (acid rain from sulfates was also nasty). So the EPA (created under Nixon) imposed emission controls. Sulfate emissions dropped. Reflection away of sunlight, and associated cooling decreased. Global temperatures went up… hmmmm.

Since when “may have” is any king of science ???

We’re blanketed in it right now….even the sky is hazy

….and it’s hot and muggy as it can get

Of course the Saharan dust is an aerosol, as is salt spray from ocean waves after the water evaporates and soot from terpene photochemistry, as well as, wait for it, water clouds; in addition to hundreds or more other kinds from other processes. They’re all natural, including the ones humans make, even when called artificial. Well that just means done by human arts, which are just as natural as all the other ones are natural, including the biological arts that are not human.

More likely … it really is cooling.

Yeah but what happens when you include data before 1995? Certainly they knew how and recorded weather data prior to 1995 in China.

“At least 45 million people were worked, starved or beaten to death in China over these four years; the worldwide death toll of the Second World War was 55 million.”

Robert, in 1985 China was still a third world country. I can assure you that collecting climate/ weather data in in systematic fashion was not a high priority. Economic growth and modernization were their primary goals far above and beyond anything else. Though by 1995 the Clinton administration would have allowed enough technological transfer for China to begin catching up.

Well the obvious conclusion is that, far from warming the Earth during the period of massive industrialisation, mankind was artificially cooling the Earth.

Oh wow.
How woz I explaining earlier about Dragons and that, using the Peta-Portmeirion Equation, the causelation of omnibus rainings maybe directly de-trended from the well-wellings of the radations of the local dragons.
Even if they’re hard to find and you’ve never actually seen one.
(Climate Science innit. Obseravtions don’t matter at all, even an ordinary non-super supercomputer can make gazillions of em. wink wink)

And, if you feed em diesel, (c’mon, where does all them flames come from eh) the Circulating Soot Vortex could increase, or decline maybe, or it could possibly stay the same *and* be certainly be unprecedented, possibly causing a feedback nom-nomaly of the Merry Nodal Modal Overturnings and making the climate change.
Soon. It will happen soon.
Its sooo simple now when you have it explained so clearly.
Fantastic

And lookee here. China innit.
Don’t they know a thing or two about dragons. Always have done.

The Science Is Settled.

(wonder what’s got me going today. prolly the climate. haha)

0
Red94ViperRT10
Reply to  Peta of Newark

Looks like someone forgot their dose of slithey tothes this morning.

The first three sentences of the actual paper say everything we’ve been yakking about for years.

“Water vapor is a variable component in the atmosphere and a dominant greenhouse gas. Although water vapor makes up only 1.5% of the global water cycle system, it can strongly absorb long-wavelength radiation and affect Earth’s radiation budget. Moreover, phase changes of water vapor lead to latent heat exchanges in the atmospheric circulation”

And this was published in the Journal of the American Meteorological Society? What is the world coming to? Where’s the CO2? Where’s the Climate Change? Where’s the impending disaster?

Have I just woken up from a decades-long bad dream?

“Have I just woken up from a decades-long bad dream?”
Maybe. Spoiler Alert: Kristin shot J.R., but then it was all part of Bobby’s bad dream.
🙂

Laughing out loud. I see what you did there :D.

What is the ratio of human-produced aerosols to naturally produced aerosols? Why is it always assumed human activity has an effect on climate, when human activity Is likely insignificant compared to natural variables. When will we as a species stop guiltily giving ourselves credit for things we don’t do, and actually focus on natural climate variables, that have been changing the climate for millions of years.

I’m not going to read the paper, because this sounds like another attempt to explain The Pause, and ignore what your damn lying eyes reading the data tell you, there really is still big old bad nasty Global Warming out there, believe us because we have only your best interests at heart! Now is it just me, or did that sound thoroughly cynical?

Over the last 18 months I’ve been noticing a lot of green stuff appear through a rapidly diminishing haze over China, which indicates that efforts to control emissions must be working. In the ~3 years since Himawari-8 was launched, I haven’t seen any days with pollution as dense as that appearing in the image from 2004.
Here’s what it looked like a a few hours ago: 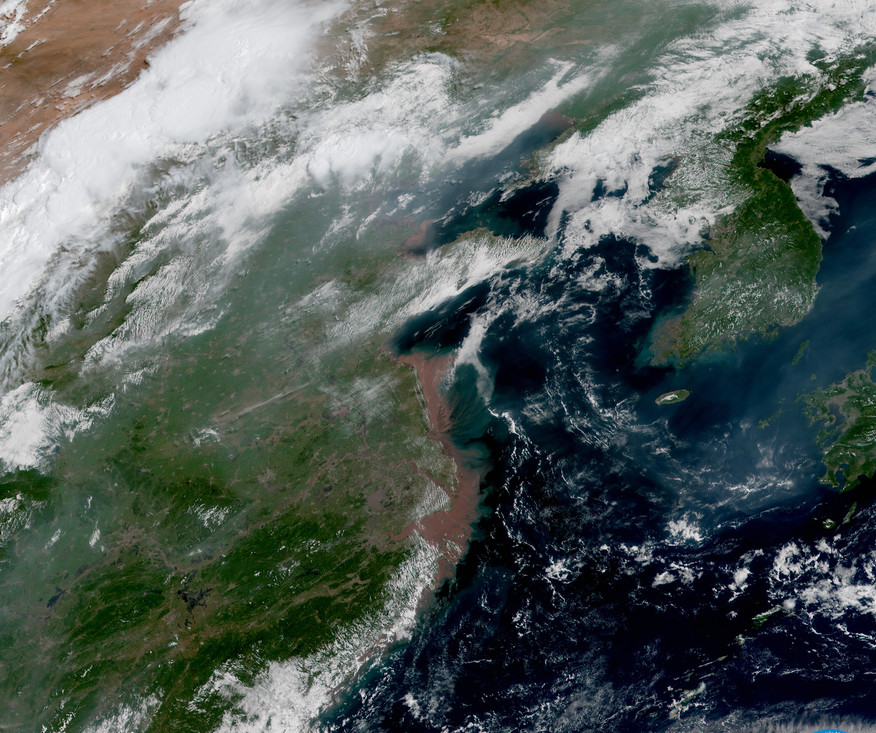 Oh – and is Latitude correct?
Does Saharan dust count as an “aerosol”?

It takes a very large volcano (some VEI5 and most VEI6 events) to cause measureable global cooling. Industrial pollution, not so much.

The 1991+ eruption of Mt Pinatubo was VEI6, roughly an order of magnitude higher.

The scale goes up to VEI8, which is open-ended – a VEI8 volcano is going to do more than cool the planet – it’s pretty much going to ruin your day.

The frequency of VEI4 events on Earth is about 18 months.

yes
global warming does not mean the same warming at every location.

The global warming which has been going on for the past 320 years is also not caused by human activity, although since we’ve cleaned up a lot of the air, we have slightly contributed to natural warming which we had impeded during the Dickensian era of industrialization. But China and India have partially refilled the particulate gap.

Still, the net sign of human activity on temperature, ie warming v cooling, can’t be determined. In any case, it’s negligible. While the beneficial effect on plant life of more CO2 is demonstrable and significant.

This is bogus. How can such a very small part of the Earth the atmosphere cause this much change? Totally impossible.