This came to me via a tip, but to be honest I get so many daily emails and comments I’ve lost the original source of the tip.

This is via the Canadian Ice Service, and it’s a view I have not seen before. It shows a polar view looking down at the North pole which is a composite of several days worth of MODIS views via NASA Goddard to create a Composite of the Arctic image. The actual image is very high resolution and I can’t show it fully here, but the detail is quite good. To help orient you, I’ve annotated some landmarks on this preview image. 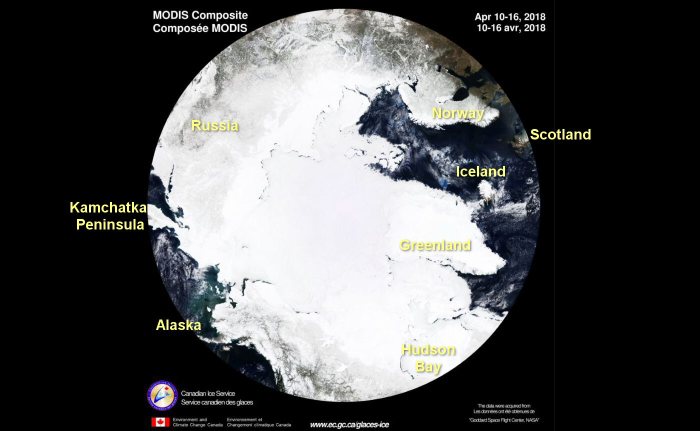 You can see the full image here, and click the image again to zoom in on it. The sheer magnitude of area covered by ice and snow is quite impressive, and it’s a useful image to show to “I read the headline only” alarmists who believe that the North pole is either burning up, missing most of its ice and snow, or both.

I’d love to include this on the WUWT sea ice page, but unfortunately, Environment Canada has chosen to produce this image from a Perl Script, rather than an image URL, and I have no way that I know of to parse the most current image out of the URL:

If anyone has any ideas, please leave a comment.

233 thoughts on “Arctic ice like you've not seen it before”