This headline on Real Clear Science caught my eye this morning:

Having grown up in Connecticut, my recollection was that the Lyme disease “epidemic” was largely driven by humans coming into more frequent contact with deer and the ticks they carry as developers built more houses in wooded, rural areas of the State.  When I was a kid (1960’s), we would often here gunshots in the woods behind our house… Deer hunters.  Those woods are now occupied by humans and expensive houses.

The article is quite long-winded, as evidenced by the following excerpt:

In a warming world, ticks thrive in more places than ever before, making Lyme disease the first epidemic of climate change

Evolution has endowed the big-footed snowshoe hare with a particularly nifty skill. Over a period of about 10 weeks, as autumn days shorten in the high peaks and boreal forests, the nimble nocturnal hare transforms itself. Where it was once a tawny brown to match the pine needles and twigs amid which it forages, the hare turns silvery white, just in time for the falling of winter snow. This transformation is no inconsequential feat. Lepus americanus, as it is formally known, is able to jump 10 feet and run at a speed of 27 miles per hour, propelled by powerful hind legs and a fierce instinct to live. But it nonetheless ends up, 86 per cent of the time by one study, as a meal for a lynx, red fox, coyote, or even a goshawk or great horned owl. The change of coat is a way to remain invisible, to hide in the brush or fly over the snow unseen, long enough at least to keep the species going.

Snowshoe hares are widely spread throughout the colder, higher reaches of North America – in the wilderness of western Montana, on the coniferous slopes of Alaska, and in the forbidding reaches of the Canadian Yukon. The Yukon is part of the Beringia, an ancient swathe of territory that linked Siberia and North America by a land bridge that, with the passing of the last Ice Age 11,000 years ago, gave way to the Bering Strait. All manner of mammals, plants and insects ferried east and west across that bridge, creating, over thousands of years, the rich boreal forest. But in this place, north of the 60-degree latitude, the axiom of life coloured by stinging cold, early snow and concrete ribbons of ice has been upended in the cosmic blink of an eye. The average temperature has increased by 2 degrees Celsius in the past half century, and by 4 degrees Celsius in the winter. Glaciers are rapidly receding, releasing ancient torrents of water into Kluane Lake, a 150-square-mile reflecting pool that has been called a crown jewel of the Yukon. Lightning storms, ice jams, forest fires, rain – these things are suddenly more common. Permafrost is disappearing.

Such rapid-fire changes across a broad swathe of northern latitudes are testing the adaptive abilities of the snowshoe hare, however swift and nimble it might be. Snow arrives later. Snow melts earlier. But the hare changes its coat according to a long-set schedule, which is to say that the snowshoe is sometimes snowy white when its element is still robustly brown. And that makes it an easier target for prey. In 2016, wildlife biologists who tracked the hares in a rugged wilderness in Montana gave this phenomenon a name: ‘climate change-induced camouflage mismatch’. The hares moulted as they always had. It’s just that the snow didn’t come. Survival rates dropped by 7 per cent as predation increased.

In order to outwit its newest enemy – warmer winters – snowshoe hares would need something in the order of a natural miracle, what the biologists, writing in the journal Ecology Letters, called an ‘evolutionary rescue’. Like the Yukon, this pristine corner of Montana was projected to lose yet more snow cover; there would be perhaps an additional month of bare forest floor by the middle of this century, on which snowshoe hares would stand out like bright white balloons.

Read the rest of here, if you wish.

Basically rabbits and moose are doomed to extinction due to shorter winters.  The rabbits will all succumb to “climate change-induced camouflage mismatch” and be eaten by the birds of prey who aren’t killed by wind turbines.  The Moose will be eaten alive by hordes of Gorebal Warming-empowered ticks.

Back to the Junk Science Journalism:

Winter ticks have been known to afflict moose since the late-1800s. In a normal year, a single moose might carry 1,000 or even 20,000 ticks. In a particularly harsh winter, when moose are underfed and weak, anaemia and hypothermia wrought by ticks can make the difference between life and death.

Moose have long died from disease, predators, hunting and sometimes ticks. But their losses in the early 21st century had a different, more threatening, more consequential implication. In 2015, two environmental organisations, alarmed at population trends, petitioned the United States Secretary of the Interior to have the Midwestern moose listed as an endangered species. In Minnesota, the number of moose dropped by 58 per cent in the decade through to 2015, similar to losses in New England. Environmentalists believe moose could well be eradicated in the Midwest by 2020, with stocks declining precipitously in Wisconsin, Minnesota and Michigan.

Okay… So, it’s not mild Gorebal Warming winters that will kill the Moose… It’s particularly harsh winters, during which hordes of evil ticks infest the Moose trying to not freeze and starve to death… Did the Moose survive the Little Ice Age?  If the Moose survived the coldest phase of the Holocene, I doubt Gorebal Warming driven particularly harsh winters will be much of a problem for them.  For that matter, I’m fairly certain that the Moose handled the Pleistocene without much trouble.  For that matter Moose have existed since the Pliocene: 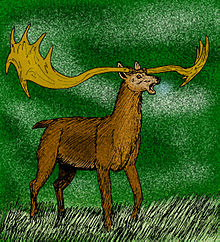 An artist’s rendition of Libralces gallicus

Moose are an old genus. Like its relatives, Odocoileus and Capreolus, the genus Alces gave rise to very few species that endured for long periods of time. This differs from the Megacerines, such as the Irish elk, which evolved many species before going extinct. Some scientists, such as Adrian Lister, grouped all the species into one genus, while others, such as Augusto Azzaroli, used Alces for the living species, placing the fossil species into the genera Cervalces and Libralces.

The earliest known species is Libralces gallicus (French moose), which lived in the Pliocene epoch, about 2 million years ago.

I won’t even bother quoting any of the nonsense about Lyme disease.

Blacklegged tick (Ixodes scapularis) Where found: Widely distributed in the northeastern and upper midwestern United States.
Transmits: Lyme disease, anaplasmosis, ehrlichiosis (Ehrlichia muris eauclairensis), babesiosis, Borrelia miyamotoi, and Powassan disease.
Comments: The greatest risk of being bitten exists in the spring, summer, and fall. However, adults may be out searching for a host any time winter temperatures are above freezing. Stages most likely to bite humans are nymphs and adult females.(CDC).

Migratory birds may have played a role in expanding Ixodes scapularis habitat range; but these bugs need high humidity and above freezing temperatures to survive.

A: Very much so. Deer ticks won’t survive if the humidity goes below 85%. A damp spring will favor the nymphs that will be biting in midsummer, while dry, hot weather in August may dry up nymphs that would otherwise molt to adults in the fall. Deer ticks will freeze under lab conditions at temperatures around 0°F, but deep within their leaf litter refuge in the winter temperatures rarely get that cold, particularly under an insulating cover of snow. As the climate gets warmer, the deer tick life cycle shortens, allowing it to be completed further north where lower temperature have limited its expansion in the past.

So… Let’s get to “the first epidemic of climate change.”

Is Lyme disease an epidemic?

epidemic the occurrence of more cases of disease, injury, or other health condition than expected in a given area or among a specific group of persons during a particular period. Usually, the cases are presumed to have a common cause or to be related to one another in some way (see also outbreak).

What is the expected occurrence of Lyme disease?

It’s interesting to note that in 2008, the data were revised to include “probable cases.”  While there appears to be an upward trend in Lyme disease cases, this graph doesn’t take population growth into account.

Left y-axis is confirmed Lyme disease cases per 100,000 people. Right y-axis is the 13-month running average temperature of the contiguous United States (deg F). Note that the worst Lyme disease years (2008, 2009) are associated with the coolest weather from 2000-2016.

The only “anomaly” in the Lyme disease data is the CDC’s decision to include probable cases from 2008-2016, yielding the false impression of an increase in the incidence of the disease and leading a Junk Science Journalist to declare it to be “the first epidemic of climate change.”

Unsurprisingly, the author of Ticks Rising is a Soros Justice Media Fellow.