From the “correlation may be causation, at least in this case” department comes a press release from the University of Delft about a student PhD thesis that seems unable to connect the dots about length of day and solar energy absorption on Earth. Reading his thesis though, especially the preface it seems that UD has churned out another potential SJW, because oddly, this old news clip is in the preface:

That aberration aside, the PhD thesis seems quite detailed, spanning over 170 pages.

Here is the Press Release from UD:

Rising sea levels are affected by all kinds of different factors, most of which we can now effectively unravel and explain almost everywhere in the world. This is according to TU Delft researcher Thomas Frederikse, who has also established that the average rise in sea levels worldwide is accelerating. Moreover, the days on earth are becoming slightly longer… Frederikse will be awarded his doctorate on Monday, 19 March.

The increase in sea levels is not the same across the world: there are significant regional differences. Thomas Frederikse has conducted a thorough study of the data from the last decades (1958-2014). ‘All kinds of factors play a role: for example, the melting of land ice, the expansion of seawater caused by increasing temperatures, but also the use of groundwater and the storage of large quantities of fresh water in inland reservoirs. Another factor is what is known as glacial isostatic adjustment (GIA). This is the ‘rebounding’ of the land after the ice ages.’

‘Because of all these factors, there is no single place on earth where the sea level exactly matches the global average. In order to understand regional patterns and be able to develop regional future scenarios, a good understanding is needed of the relevant underlying processes and associated regional patterns’, says Frederikse. ‘It is now possible to estimate local and global changes in sea levels accurately with the help of satellites. Before satellites, we only had local sea-level measurements in a limited number of places at our disposal. In this dissertation, I have been able to confirm that the sea-level rises measured in the decades before satellites can be effectively explained by the sum of all relevant physical processes.’

‘The rise in sea levels was studied for two coastal regions and on a global scale. The physical processes that we took into account were the loss of mass in glaciers and ice caps, the depletion of groundwater reservoirs, the retention of water by dams, GIAs, changes in the specific volume of seawater, local wind effects and changes in air pressure. We were able to unravel and precisely model all of these different influences for the North Sea, for example. In the period 1958-2014, the rise in sea levels in the North Sea amounted to ‘just’ around 8 cm. This is comparable to the average worldwide increase over the same period, which is approximately 1.5 mm per year, but the underlying causes are different: the melting of glaciers and Greenland have hardly any effect here, but when it comes to Antarctica, we get the full blast. This is not good news for us, because the ice cap in Antarctica could lose a lot of mass in a future warmer world.’

‘We are now able to explain sea-level rises in almost all oceans’, explains Frederikse. ‘Although the issue of rising sea levels is complex, we now have a good understanding of most factors at play. As a result, the models and predictions are better, which is good news. The picture emerging is of rising sea levels and a significant acceleration in that process (with considerable regional differences). This is not only based on modelling; the measurements demonstrate that it is already happening. That is the bad news.’

Frederikse’s research also reveals something else: days on earth are becoming slightly longer (around 0.2 milliseconds in the last 25 years) as a result of the melting land ice. This is causing mass (in the form of ice) to disappear, primarily in Greenland and Antarctica, which moves in the direction of the equator as liquid water. This results in slight changes in the distribution of the earth’s mass. ‘Just like a figure skater who stretches out their arms during a pirouette, it makes the earth turn slightly more slowly, and the days therefore last slightly longer now.’

Here is the part I found interesting:

Global sea level can not be described by a linear or quadratic trend with white noise residuals. One of the reasons why simple functional models are not well-suited to describe the global sea-level curves is the presence of temporal autocorrelation, which manifests itself as large decadal and multi-decadal oscillations in the curve. This property of auto-correlated residuals is well-known, and results in substantial uncertainties when estimating long-term trends and accelerations from tide-gauge records and reconstructions (Dangendorf et al., 2014b; Haigh et al., 2014). All global reconstructions in Figure 1.2 show decadal variability, although the variability is far from consistent between the methods. Hence, it is difficult to assess whether this variability is a real phenomenon in global-mean sea level or an artefact of the sparse observations. Some work suggests the presence of long-term oscillations with a fixed period in global sea level (Chambers et al., 2012). The attribution of this variability on a wide range of scales to individual processes still forms a challenge.

Since sea-level change is not a recent phenomenon, as visible in Figure 1.1a, one key question is which part of the observed rise can be attributed to human causes, and which part is due to natural fluctuations. Using statistical values or earth system models, various studies find widely-varying fractions of observed 20th-century sealevel changes that can be attributed to anthropogenic activities (Slangen et al., 2016; 1.3. The open questions about global sea-level changes during the 20th century Dangendorf et al., 2015; Marcos et al., 2017; Kopp et al., 2016), although most are in the order of 30 to 60 percent.

One of the main arguments that led to Munk’s enigma is the inability of the ocean volume and mass changes to explain the reconstructed sea-level rise. When ice sheets and glaciers lose mass, a net shift of water from high latitudes towards the equator affects the earth’s dynamic oblateness, and hence, its rate of rotation. The increase of the earths moment of inertia around its axis of rotation increases when ice sheets and glaciers lose mass, resulting in an increase of the earth’s length-of-day. Specific phenomena, such as solar eclipses, critically depend on the length-of-day, which allows for an accurate reconstruction of its changes back in time. The observed increase in the length-of-day over the 20th century cannot be reconciled with the amount of ice mass loss required to explain the reconstructed sea-level rise (Munk, 2002; Mitrovica et al., 2015). However, as already noted above, recent reconstructions suggest a substantially lower sea-level change over the twentieth century (Hay et al., 2015; Dangendorf et al., 2017).

Here are the figures: 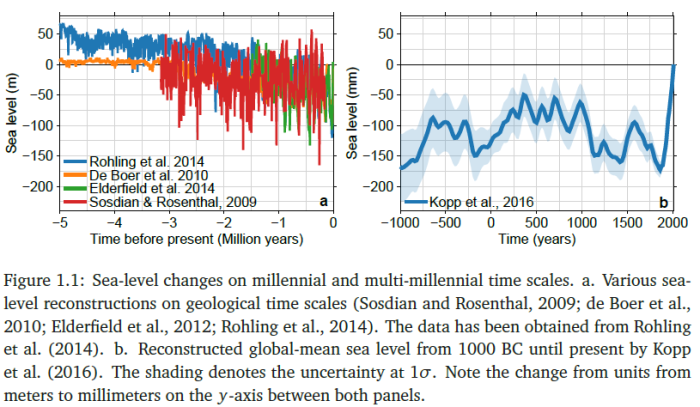 One graph that is missing from the paper is one showing changes in Length of Day and temperature. Since it was discussed in the paper, but wasn’t included, I’ll show one. This one is from NASA in 2011:

The article that uses the graph says:

The researchers found that the uncorrected temperature data correlated strongly with data on movements of Earth’s core and Earth’s length of day until about 1930. They then began to diverge substantially: that is, global surface air temperatures continued to increase, but without corresponding changes in Earth’s length of day or movements of Earth’s core. This divergence corresponds with a well-documented, robust global warming trend that has been widely attributed to increased levels of human-produced greenhouse gases.

“Our research demonstrates that, for the past 160 years, decadal and longer-period changes in atmospheric temperature correspond to changes in Earth’s length of day if we remove the very significant effect of atmospheric warming attributed to the buildup of greenhouse gases due to mankind’s enterprise,” said Dickey. “Our study implies that human influences on climate during the past 80 years mask the natural balance that exists among Earth’s rotation, the core angular momentum and the temperature at Earth’s surface.”

Read the full article here, where they suggest internal Earth processes are responsible for LOD change, with a hat tip to Svensmark:

It seems to me that Frederikse missed a big opportunity to link LOD to increased temperature, and to increased ice melt resulting in sea level rise.