SEE UPDATE ON EPA AT END OF THIS ARTICLE

These real vs. alternative facts have been in the news the last couple of days. Here’s a real fact for those that think and live in alternative world.

Trump silences scientists at EPA, USDA  A message sent to EPA staff on Monday prohibits staff from creating press releases, blogs, messages, or any social media postings concerning their taxpayer funded work. The US Department of Agriculture has banned scientists and other employees in its main research division from publicly sharing everything from the summaries of scientific papers to USDA-branded tweets as it starts to adjust to life under the Trump administration.

Trump administration tells EPA to freeze all grants, contracts “They’re trying to freeze things to make sure nothing happens they don’t want to have happen, so any regulations going forward, contracts, grants, hires, they want to make sure to look at them first,” said Ebell, director of the Center for Energy and Environment at the Competitive Enterprise Institute, an industry-backed group that has long sought to slash the authority of the EPA.

Trump administration tells EPA to cut climate page from website The employees were notified by EPA officials on Tuesday that the administration had instructed EPA’s communications team to remove the website’s climate change page, which contains links to scientific global warming research, as well as detailed data on emissions.

Here is why Trump can do these things:

Article 2 of the Constitution on the Executive Branch spells it out:

Excerpt of the key section:

Clause 1. The President shall be Commander in Chief of the Army and Navy of the United States, and of the Militia of the several States, when called into the actual Service of the United States; he may require the Opinion, in writing, of the principal Officer in each of the executive Departments, upon any Subject relating to the Duties of their respective Offices, and he shall have Power to grant Reprieves and Pardons for Offences against the United States, except in Cases of Impeachment.

Here the Framers spell out several of the president’s more important powers. First and foremost, he is commander-in-chief of the military. Second, he is the boss of the heads of all the civilian departments of government; the bit here about requiring their written opinions provides the constitutional basis for the cabinet. And third, he has the power to pardon individuals convicted of crimes.

Basically, the civilian departments such as EPA, USDA and NOAA now work for President Trump, with the Directors of these agencies working with the administration to further the President’s policies.

These agencies under President Obama were infused with Obama’s ideology, particularly the EPA and NOAA (I know less about the USDA).  Has this led to unethical behaviors in these agencies?  I do know of one example, and I have post planned for Feb 5, stay tuned.

So, Trump has constitutional power behind this. Whiners about this should remember that Obama made 275 executive orders during his presidency.

The EPA climate web page has no original data there, they rely on NOAA, NASA, etc. Mostly, it is just EPA opinion. I predict there won’t be any significant loss. 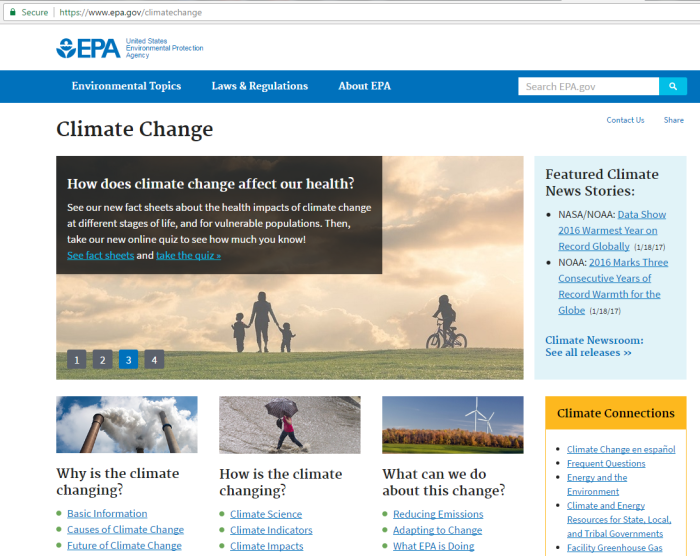 We are in the ERA of post-normal politics, where POTUS plans to use his constitutionally granted power to restore balance to our government and bureaucracy, and doesn’t care one whit if some people are offended by it.

UPDATE: InsideEPAClimate is reporting this –

EPA is temporarily suspending its plans to remove the main climate change page from the agency’s website, amid news reports that the page was slated to be removed Jan. 25, though the Office of General Counsel (OGC) has been tasked with reviewing the implications of removing some material, according to an agency source.

UPDATE2: I think it is safe to shut it down. The wayback machine has been furiously archiving it this past month:

276 thoughts on “Alternative facts: Why the constitution gives Trump the power to tell @EPA what to do”