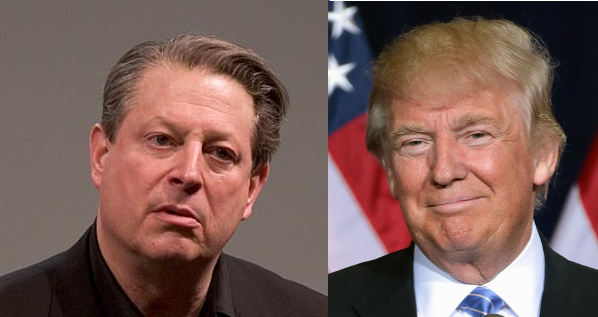 What happened in the meeting? Nobody knows for sure – but in the wake of a one hour meeting between Al Gore and Donald Trump, Gore has promised an “unprecedented” surge in climate activism, to protect a renewable energy revolution which he also claims will “happen anyway”.

The urgent threat of climate change means there is “no time to despair” over the election of Donald Trump, according to former vice-president Al Gore, who hopes that Barack Obama and Hillary Clinton will join an escalated climate campaign against the president-elect.

Gore told the Guardian he remained hopeful Trump would reverse some of his positions on climate change but predicted an unprecedented backlash from environmentalists over the next four years.

Trump, who has called climate change a hoax, has pledged to withdraw the US from the Paris climate accord, dismantle the Clean Power Plan, slash renewable energy funding and somehow prop up the ailing US coal industry.

“My message would be that despair is just another form of denial. There is no time to despair. We don’t have time to lick our wounds, to hope for a different election outcome.

“We have to win this struggle and we will win it; the only question is how fast we win. But more damaged is baked into the climate system every day, so it’s a race against time.”

On Monday, Gore spent around an hour meeting with Trump and his daughter Ivanka, who reportedly plans to speak out on climate change despite her father’s skepticism of the issue.

“I had a lengthy and very productive session with the president-elect,” Gore said, after emerging from the meeting at Trump Tower in New York City.

“It was a sincere search for areas of common ground. I had a meeting beforehand with Ivanka Trump. The bulk of the time was with the president-elect, Donald Trump. I found it an extremely interesting conversation, and to be continued, and I’m just going to leave it at that.”

“Regardless of what he does, a sustainable energy revolution is under way.”

My guess is Trump wants to find a way to defuse climate opposition, but I don’t think there is any room to manoeuvre. Any serious concessions to the climate movement would be treated by many of Trump’s supporters as a sell-out. The entrenched positions are simply too polarized.

You don’t “drain the swamp” by hiring swamp critters.

The assertions of the “inevitability” of the renewable energy revolution juxtaposed with promises of “unprecedented” climate action are noteworthy. If the green revolution is so “inevitable”, why the need for a hysterical activist response should the Trump administration cut federal support?