From PRINCETON UNIVERSITY and the “it’s not a lie, if you believe it” department comes this laughable study. Opinion is not hurricane data, and opinion doesn’t trump physical measurement. The one graphic they cite in the PR is for the last landfalling hurricane in the Gulf Coast area of study. Essentially a single data point. Here’s the real data showing that despite the authors own belief system, hurricanes are not getting worse.

Major hurricane (Cat3 or greater) drought in the USA is approaching 4000 days. The last time a major hurricane made landfall in the U.S., was Wilma on October 24, 2005. 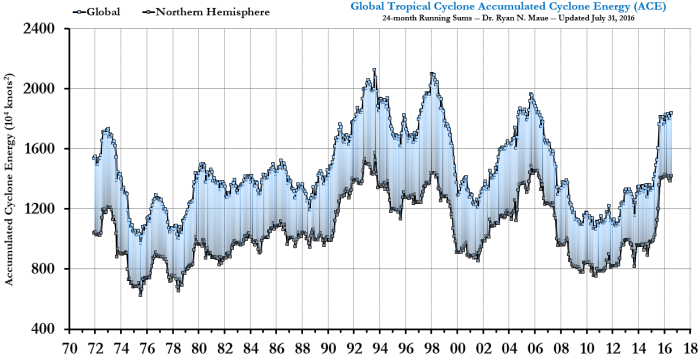 (added) And because they cite more “economically damaging hurricanes”, the actual data doesn’t support that either: 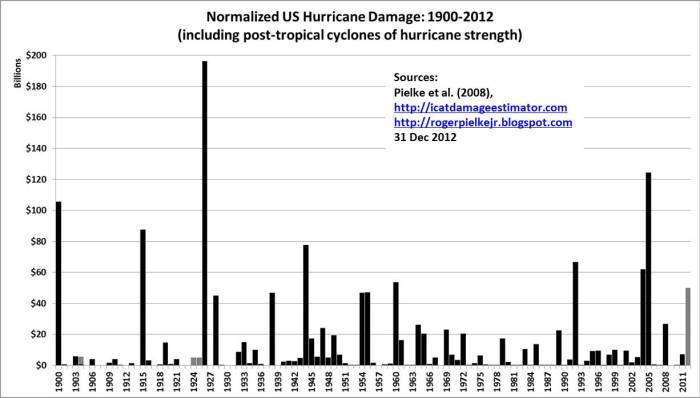 And quite frankly, what value do these perceptions have, except to support fear mongering? What a garbage study. -Anthony

Hurricanes are worse, but experience, gender and politics determine if you believe it

Princeton University-led research found that people’s view of future storm threat is based on their hurricane experience, gender and political affiliation, despite ample evidence that Atlantic hurricanes are getting stronger. This could affect how policymakers and scientists communicate the increasing deadliness of hurricanes as a result of climate change. The figure above shows the wind speed of the latest hurricane landfall (left) on the U.S. Gulf Coast by county up to 2012, with red indicating the strongest winds. The data on the right show for the same area, by county, public agreement with the statement that storms have been strengthening in recent years, which was posed during a 2012 survey. Blue indicates the strongest agreement, while red equals the least agreement.
CREDIT Image courtesy of Ning Lin, Department of Civil and Environmental Engineering

Objective measurements of storm intensity show that North Atlantic hurricanes have grown more destructive in recent decades. But coastal residents’ views on the matter depend less on scientific fact and more on their gender, belief in climate change and recent experience with hurricanes, according to a new study by researchers at Princeton University, Auburn University-Montgomery, the Louisiana State University and Texas A&M University.

The researchers plumbed data from a survey of Gulf Coast residents and found that the severity of the most recent storm a person weathered tended to play the largest role in determining whether they believed storms were getting worse over time, according to the study published in the International Journal of Climatology. The survey was conducted in 2012 before Hurricane Sandy, the second-most expensive hurricane in history, caused $68 billion in damage.

“Understanding how people in coastal regions perceive the threat is important because it influences whether they will take the necessary actions to address that threat,” said Ning Lin, the senior researcher on the study and a Princeton assistant professor of civil and environmental engineering.

“What you see is that there is often a gap between the reality of the storm trends and how people interpret those trends,” said Siyuan Xian, a doctoral candidate in Lin’s lab and co-lead author of the new paper.

While scientists continue to debate the impact of climate change on the frequency and strength of hurricanes, numerous studies of objective measures — such as wind speed, storm-surge height and economic damage — show that hurricanes are stronger than they were even a few decades ago.

For instance, eight of the 10 most economically damaging hurricanes since 1980 have occurred since 2004, according to the National Oceanic and Atmospheric Administration (NOAA). In constant dollars, Hurricanes Katrina (2005) and Sandy caused nearly $154 billion and $68 billion in damage, respectively, according to NOAA.

In comparison, the costliest storms of the 1990s, Hurricanes Andrew (1992) and Floyd (1999), caused $46 billion and $9 billion in damage (adjusted for inflation), respectively. Hurricane Patricia in 2015 was the strongest Western Hemisphere storm in recorded history with maximum sustained winds of 215 miles per hour.

As the intensity of storms has increased, government agencies and coastal residents must grapple with preparing for the next landfall. Residents must decide, for example, whether to invest in storm shutters, roof and wall fortifications, flood-proof flooring and other structural buffers. On a larger scale, coastal planners need voter support to implement land-use policies that take the threat into account and to invest taxpayer dollars into protection measures such as seawalls or sand dunes.

Understanding how people perceive the threat of hurricanes is crucial for predicting whether they will take them seriously, Xian said. Six hurricanes form each year in the North Atlantic on average, although as many as 15 have developed in a single hurricane season.

“If you perceive a higher risk, you will be more likely to support policies and take action to ameliorate the impacts,” Xian said. “We wanted to know how people perceive the threat of hurricanes and what influences their perceptions. This information will help guide how agencies communicate the risk, and what policies and actions are proposed to make communities resilient to these storms.”

To explore what influences perceptions of hurricane threat, the researchers analyzed data from the 2012 Gulf Coast Climate Change Survey to analyze Gulf Coast residents’ beliefs about hurricane trends from 1992 to 2011. Louisiana State University and NOAA conducted the survey.

The survey focused on residents of Texas, Louisiana, Mississippi, Alabama and Florida, who lived in areas of the Gulf Coast that experienced at least one hurricane landfall over the 20-year period from 1992 to 2011.

In addition to probing beliefs about hurricane trends, the survey gathered information on respondents’ gender, political affiliations, opinions on climate change and other characteristics that might influence their perspective on hurricane trends.

The researchers’ results mirrored a trend seen in other studies of extreme climate events, Lin said.

“The increasing power of Atlantic hurricanes is often connected to climate change, but studies have shown that Republicans and males tend to be more skeptical of climate change,” Lin said. “We found a strong link between disbelief in climate change and disbelief that storms are getting worse — they tend to come as a package.”

The researchers were able to tease out what elements of the storms a respondent had experienced left the biggest impression on them. For instance, while storm surges tend to cause the most property damage, gale winds were more likely to convince people that hurricanes are getting stronger.

Behavioral scientists have long hypothesized the most recent landfall of a storm has a stronger influence on people’s perceptions of long-term climate trends, said Sander van der Linden, a postdoctoral researcher and lecturer in Princeton’s Woodrow Wilson School of Public and International Affairs, and director of the Social and Environmental Decision-Making (SED) Lab. Van der Linden is familiar with the research but had no role in it.

“This study provides strong empirical evidence of this phenomenon,” said van der Linden, who studies public policy from a behavioral-science perspective. “This finding is important because it suggests that people may not be thinking about long-term changes in climate patterns but rather are paying attention to more salient variations in and impacts of short-term local weather.”

The study’s authors said this information could help governments communicate hurricane risk more effectively to the public. Taking into account that people are more likely to respond to the threat of high winds, for instance, could help agencies such as the Federal Emergency Management Agency motivate the public to adequately prepare for storms. The researchers also recommended that public agencies work to further educate the public about the risk posed by storm surge.

“Public opinion can make or break policies intended to address climate change and ameliorate damage from storms,” Lin said. “Tapping into the state of current perceptions and what drives them will be critical for governments around the world as the impacts of climate change are increasingly felt.”

The researchers are currently conducting other studies related to climate-change perception, including research on flood adaption and insurance-purchasing behavior in the counties along the Gulf Coast, as well as looking at worldwide perceptions of climate change and the willingness to adopt green-energy technologies.

The paper, “Understanding perceptions of changing hurricane strength along the US Gulf coast,” was published online June 20 by the International Journal of Climatology. Support for the research was provided in part by NOAA’s Gulf of Mexico Coastal Storm Program, Texas Sea Grant, Louisiana Sea Grant, Florida Sea Grant and Mississippi-Alabama Sea Grant Consortium.