[UPDATE TWO: Rather than trying to cooper up the errors, I have simply removed the incorrect sections and left the calculation of the Planck feedback intact. I think that it is right … however, as events remind me too frequently … I could be wrong … ]

[UPDATE: As Jan Kjetil Andersen has pointed out below, my assumptions about results shown in Figures 3 and 4 are incorrect (although my analysis of Figure 2 may still be correct). SO … I’ll have to put at least the latter part of this post on hold until I think about it some more. To me, this is the beauty of the web, I get to correct my misconceptions immediately rather than following a wrong path for months. I will return to this topic after more thought. At present, in the immortal words of Richard Nixon, my previous statements based on Figs. 3 & 4  are inoperative … it’s a work in progress, I’ll report back.]

I must thank my friend, the irrepressible, irascible, highly improbable, sometimes infuriating but always fascinating Lord Christopher Monckton, for his essay yclept “IPCC has at least doubled true climate sensitivity: a demonstration“. His claims and musings, while not always correct, are invariably interesting and bring up lots of relevant questions and mathematical conundra. They generally make me say either “good, Lord” or “good Lord!”, and they often lead me to interesting research. Here’s what I found out this time.

The pre-feedback sensitivity λ0 is given in Fig. 1 as 0.312 degrees C (or K) per watt per metre squared (W/m2). This is the same as saying that the Planck feedback is -3.2 W/m2 per degree C. In other words, the Planck feedback says that when the globe warms by 1°C, it radiates (and thus cools) by an additional 3.2 W/m2. This is a negative feedback, as indicated by the minus sign.

Doing some research found lots of back-and-forth about the proper value for the Planck feedback, based on a host of theoretical claims. So rather than entering into those theoretical disputations, “whose thoughts are full of indices and surds” as the poet has it,  I figured I would look at the actual data. A radical thought, I know, but I’m that kind of guy. The Planck feedback is the negative of the change in outgoing radiation (∆W) per one degree change in surface temperature ((∆T). The CERES satellite data has that information. I have shown the results for ice-free ocean, for three reasons. The first is that the ocean data is more internally consistent than the land because it is free of obstructions and it all has the same elevation and surface characteristics. The second is that in this particular case, land observations are basically of the same form as the ocean observations but with greater scatter, which obscures underlying patterns. The third is that most of the world is made up of ice-free ocean … in any case, here are those results. 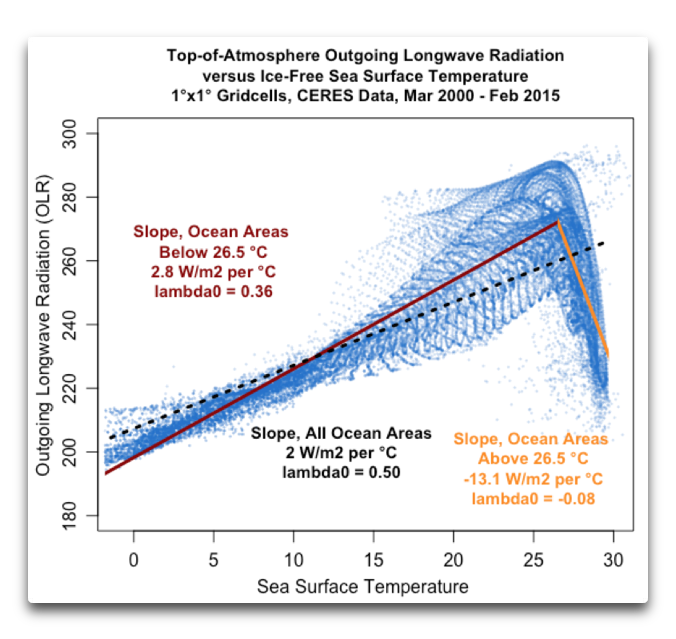 Figure 2. Scatterplot, fifteen-year averages of outgoing top-of-atmosphere longwave versus sea surface temperature. The Planck feedback is the negative of the slope, meaning that on average the Planck feedback is ~ -2.0 W/m2 per °C. All slopes are calculated using area-weighed values.

Dang … can you say “non-linear”? More like “falling off a cliff” … in any case, I’d say that this is a marvelous example of the difficulty with IPCC-style linear mathematical derivations of various values—they often run aground on a reef of non-linear reality. Not only is the reality wildly non-linear, but the average value for the Planck feedback (-2.0 W/m2 per °C) is only about two-thirds that suggested by the models (-3.2 W/m2 per °C). Not sure what I can say about that …

Let me recap the bidding here. I’ve calculated the Planck feedback from observational data as being on the order of 2 W/m2 per degree C of surface warming. This number is about the same whether it is calculated from land or ocean temperatures. This implies a pre-feedback sensitivity of about 0.5°C per W/m2, or about 1.7°C for a doubling of CO2. I note that this observationally based calculation of the Planck feedback is smaller than the IPCC model-determined value of 3.2 W/m2 per degree C.

Late afternoon here. It was warm earlier, but now the fog is working its way inshore. It hasn’t arrived yet, but what I call the “fog wind” has started blowing. What happens is that the fog is low-lying, in what is called the “marine layer”. As the marine layer works its way inland from the ocean in the afternoon, there’s often a wind blowing over the top of the fog. It outpaces the fog, and up here about six miles (10 km) inland and at 700′ (210 metres) elevation, the fog wind is often the first signal of the approach of the marine layer. The fog wind is easily distinguished in two ways. The first is that despite the day being warm and sunny with clear skies, the fog wind is cold and clammy. At the top surface of the marine layer the fog is constantly evaporating and both cooling and moistening the overlaying air layer. It is this cold moist air layer that blows ashore as the fog wind.

The second way I can tell it’s the fog wind is that it has the green, slightly clammy tidal-flats smell of the northern ocean. If it were wine I’d say it has notes of seaweed and tones of driftwood, with an underlying hint of adventures on the restless sea … what an astounding world it is our privilege to inhabit!

My Usual Request: Misunderstanding is the bane of the internet, but we can minimize it by being specific about our differences. If you disagree with me or anyone, please quote the exact words you disagree with, so we can all understand the exact nature of your objections. I can defend my own words. I cannot defend someone else’s interpretation of some unidentified words of mine.

My Other Request: If you believe that e.g. I’m using the wrong method or the wrong dataset, please educate me and others by demonstrating the proper use of the right method or identifying the right dataset. While demonstrating that I’m wrong about methods or data is valuable, it doesn’t advance the discussion as much as if you can point us to the right way to do it.

Data: I collated the data of the IPCC Table 9.5 regarding the sensitivities of the CMIP5 models here as an Excel spreadsheet. Then I did a variety of analyses on it … although not actively user-aggressive, it’s not user-friendly, but you might glean something from it. Most of the work above is done in R, but the analysis of the Monckton results is in the spreadsheet.

Further Reading: As usual, what I did in this case was to go get the data first, and see if I could duplicate Lord Monckton’s results. After I’d duplicated his calculations, and analyzed and gleaned all that I could from the data, then and only then I went to look at the literature. The two papers I found that were of the most use were by the insightful Nic Lewis, “Briefing Note on Climate Sensitivity“, and a 2011 essay by Lucia Liljegren, who is most always worth reading, entitled Monckton Planck parameter no better than pulling numbers out of a hat … dang, Lucia, don’t hold back, tell us what ya really think …

“… as the poet has it …”: The poet in question is Lewis Carroll of Alice in Wonderland fame, who wrote:

Yet what are all such gaieties to me

Whose thoughts are full of indices and surds?

Gotta admire a guy who rhymes “me” with “53” and “surds” with “11/3” … and offers us a formula with only imaginary roots. It’s actually part of a complicated double acrostic, see here for more information.

101 thoughts on “Pre- and Post-Feedback Sensitivity”