This summer there will be lots of fun and rejoicing on California lakes and reservoirs, many of which are now nearly full thanks to a strong El Niño in the winter of 2015/2016 that produced copious amounts of rain and snow in March. Many in California have started thinking that the drought is over, no more worries. They couldn’t be more wrong.

The drought that produced images like this one are the result of La Niña conditions in the tropical Pacific.What a difference a year makes.

Bob Tisdale pointed out the observed changes in a recent WUWT post: For Those Watching the Sea Surface Temperature Anomalies of the Equatorial Pacific and the Decay of the El Niño

The latest sea surface temperature anomaly map from the CMC Environment Canada (Figure 1) shows cooler than normal sea surface temperature anomalies along the equatorial Pacific east of about 125W, indicating the tropical Pacific is heading toward La Niña conditions. (Note the odd base years for anomalies used by CMC Environment Canada, 1995 to 2009.)

Figure 2 Note that the horizontal lines in the graphs are the present readings, not the trends. 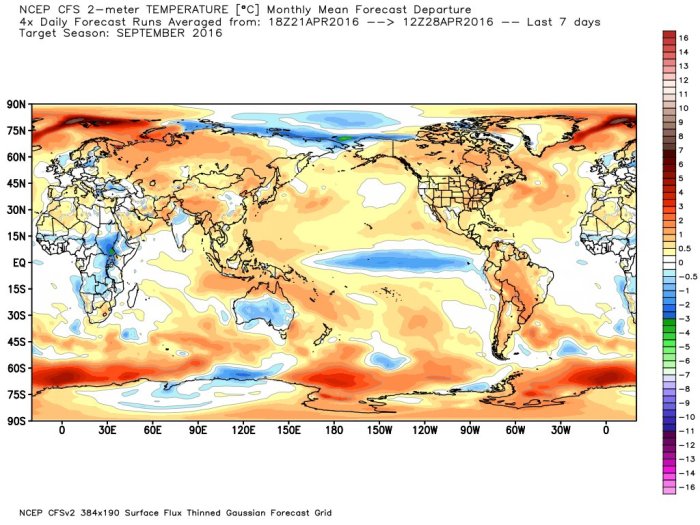 Joe Bastardi of Weatherbell noted this about Figure 4 on Twitter:

Arctic sea ice decline, if in fact driven by surface temperature, might not be as disastrous as is being predicted when the September melt peak comes around. But more worrisome will be the late Atlantic Hurricane season and water supplies for the west coast.

The Klotzbach/Gray hurricane forecast for 2016 states:

We anticipate that the 2016 Atlantic basin hurricane season will have approximately average activity. The current weakening El Niño is likely to transition to either neutral or La Niña conditions by the peak of the Atlantic hurricane season. While the tropical Atlantic is relatively warm, the far North Atlantic is quite cold, potentially indicative of a negative phase of the Atlantic Multi-Decadal Oscillation. We anticipate a near-average probability for major hurricanes making landfall along the United States coastline and in the Caribbean. As is the case with all hurricane seasons, coastal residents are reminded that it only takes one hurricane making landfall to make it an active season for them. They should prepare the same for every season, regardless of how much activity is predicted

La Niña conditions in the tropical Pacific mean a drier water year for the U.S. West Coast due to a blocking high pressure ridge:

California still hasn’t learned anything from the last water crisis, and still isn’t building any new water storage infrastructure. It may take a mega-drought before they finally decide survival of the state is more important than the greenies’ wailing objections to new reservoirs. It’s not a matter of if, but when.

63 thoughts on “Forecast: La Niña to replace El Niño conditions in the fall of 2016 – dry winter for California expected”