From the department of “correlation is not causation” department comes this weapons-grade-stupid study. Next they’ll be telling us the Catholic church started the Medieval Warm Period with the crusades. Get a load of this statement:

The indirect effects of this demographic impact rippled through the surrounding forests and, perhaps, into our atmosphere.

“One argument suggests that indigenous population collapse in the Americas resulted in a reduction of carbon dioxide in the atmosphere because of forest regrowth in the early colonial period. Until now the evidence has been fairly ambiguous. Our results indicate that high-resolution chronologies of human populations, forests and fires are needed to evaluate these claims.”

All this from a few thousands of native people. OMFG. The stupid, it burns like magnesium! 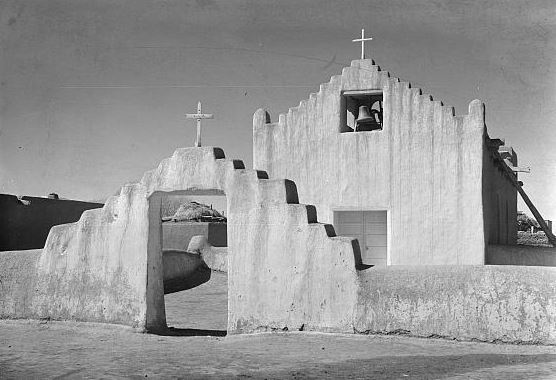 New interdisciplinary research in the Southwest United States has resolved long-standing debates on the timing and magnitude of American Indian population collapse in the region.

The severe and rapid collapse of Native American populations in what is now the modern state of New Mexico didn’t happen upon first contact with Spanish  in the 1500s, as some scholars thought. Nor was it as gradual as others had contended.

Rather than being triggered by first contact in the 1500s, rapid population loss likely began after Catholic Franciscan missions were built in the midst of native pueblos, resulting in sustained daily interaction with Europeans.

The indirect effects of this demographic impact rippled through the surrounding forests and, perhaps, into our atmosphere.

Those are the conclusions of a new study by a team of scientists looking for the first time at high resolution reconstructions of human population size, tree growth and fire history from the Jemez Mountains of New Mexico.

“Scholars increasingly recognize the magnitude of human impacts on planet Earth, some are even ready to define a new geological epoch called the Anthropocene,” said anthropologist and fire expert Christopher Roos, an associate professor at Southern Methodist University, Dallas, and a co-author on the research.

“But it is an open question as to when that epoch began,” said Roos. “One argument suggests that indigenous population collapse in the Americas resulted in a reduction of carbon dioxide in the atmosphere because of forest regrowth in the early colonial period. Until now the evidence has been fairly ambiguous. Our results indicate that high-resolution chronologies of human populations, forests and fires are needed to evaluate these claims.”

A contentious issue in American Indian history, scientists and historians for decades have debated how many Native Americans died and when it occurred. With awareness of global warming and interdisciplinary interest in the possible antiquity of the Anthropocene, resolution of that debate may now be relevant for contemporary human-caused environmental problems, Roos said.

Findings of the new study were published Jan. 25, 2016 in the Proceedings of the National Academy of Sciences, “Native American Depopulation, Reforestation, and Fire Regimes in the Southwest U.S., 1492-1900 C.E.”

The researchers offer the first absolute population estimate of the archaeology of the Jemez Province — an area west Santa Fe and Los Alamos National Lab in northern New Mexico. Using airborne remote sensing LiDAR technology to establish the size and shape of rubble mounds from collapsed architecture of ancestral villages, the researchers were able to quantify population sizes in the 16th century that were independent of historical documents.

To identify the timing of of the population collapse and its impact on forest fires, the scientists also collected tree-ring data sets from locations adjacent to the Ancestral Jemez villages and throughout the forested mountain range. This sampling framework allowed them to refine the timing of depopulation and the timing of fire regime changes across the Jemez Province.

Their findings indicate that large-scale depopulation only occurred after missions were established in their midst by Franciscan priests in the 1620s. Daily sustained interaction resulted in epidemic diseases, violence and famine, the researchers said. From a population of roughly 6,500 in the 1620s fewer than 900 remained in the 1690s – a loss of more than 85 percent of the population in a few generations.

“The loss of life is staggering,” said anthropologist Matthew Liebmann, an associate professor at Harvard University and lead author on the PNAS article.

“Imagine that in a room with 10 people, only one person was left at the end of the day,” Liebmann said. “This had devastating effects on the social and economic lives of the survivors. Our research suggests that the effects were felt in the ecology of the forests too.”

Other scientists on the team include Josh Farella and Thomas Swetnam, University of Arizona; and Adam Stack and Sarah Martini, Harvard University.

The researchers studied a 100,000-acre area that includes the ancestral pueblo villages of the Jemez (HEY-mehz) people. Located in the Jemez Mountains of north central New Mexico, it’s a region in the Santa Fe National Forest of deep canyons, towering flat-topped mesas, as well as rivers, streams and creeks.

Today about 2,000 Jemez tribal members live at the Pueblo of Jemez.

The authors note in their article that, “Archaeological evidence from the Jemez Province supports the notion that the European colonization of the Americas unleashed forces that ultimately destroyed a staggering number of human lives,” however, they note, it fails to support the notion that sweeping pandemics uniformly depopulated North America.”

“To better understand the role of the indigenous population collapse on ecological and climate changes, we need this kind of high-resolution paired archaeological and paleoecological data,” said Roos. “Until then, a human-caused start to Little Ice Age cooling will remain uncertain. Our results suggest this scenario is plausible, but the nature of European and American Indian relationships, population collapse, and ecological consequences are probably much more complicated and variable than many people had previously understood them to be.”

183 thoughts on “Climate Craziness of the Week: Impact of Spanish missionaries triggered the 'Little Ice Age'”