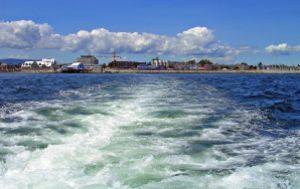 Case Smit reminds me of this story from AGU that seemed so ridiculous at the time, that I laughed and forgot about it.

Getting ships to generate smaller bubbles as they sail across the oceans could counteract the impact of climate change, a study suggests.

Scientists from University of Leeds, UK, say this would create a brighter wake behind a vessel and reflect more sunlight back into space.

However, it could also increase rainfall in some areas.

Microscopic bubbles generated by shipping could lower global temperatures by 0.5 F says a study presented at the AGU Fall Meeting in San Francisco. according to scientist from the University of Leeds, UK. And possibly reduce fuel costs by being more “streamlined”.

As ships sail across the waves, the white froth they create in their wake stands out from the dark ocean waters.

But the team behind this study said that if the bubbles in the froth were smaller in size, the watery trail would be even brighter.

More importantly, it would also stick around for much longer: the bubbles could last for up to 24 hours, compared with an average lifetime of a few minutes for ordinary bubbles.

This would have the effect of reflecting and refracting sunlight off the surface of the ocean, said Prof Forster.

The team found that making bubbles 10 to 100 times smaller than their current size – to about 1 micron (one millionth of a metre) – had the greatest impact. And that this could be done by fitting aerosol technology to the backs of ships.

Julia Crook, also from Leeds, explained: “The technology required for other forms of solar radiation management is a long way off being ready, whereas micro-bubble generators already exist.

“The Japanese are already experimenting with micro-bubbles under ships’ hulls to make them more streamlined and more fuel-efficient.

“This could have a double benefit.”

The team used a computer model to calculate what would happen if 32,000 large ships – the current estimate of large vessels on the high seas – produced tinier bubbles.

“If we were to successfully put these generators on to these ships, and the ships just went about their normal business, we did find there was potential to reduce the surface temperature by about 0.5C,” Prof Forster said.

However, while this would somewhat counteract the effect of climate change, the team found it would also increase precipitation in some areas.

And there are some concerns about unforeseen consequences on ocean ecosystems, although the team thinks that the scheme probably would not affect ocean productivity – how carbon is moved around the ocean.