On Thursday, March 13, 2014, the U.S. National Climactic Data Center switched to gridded GHCN-D data sets it uses to report long term temperature trends – with a resulting dramatic change in the official U.S. climate record. As seems to always happen when somebody modifies the temperature record, the new version of the record shows a significantly stronger warming trend than the unmodified or, in this case, discarded version.

As will be illustrated below in the side by side comparison graphs, the increase in the warming trend in the new data set is largely the consequence of significantly lowering the temperature record in the earlier part of the century, thereby creating a greater “warming” trend.

This particular manipulation has a long history. For an outstanding account of temperature record alterations, tampering, modifications and mutilations across the globe, see Joseph D’Aleo and Anthony Watts’ Surface Temperature Records: Policy-Driven Deception?

It should be noted that the 0.088 degree figure above was never reported by the NCDC. The Center’s previous practice was to use one data set for the national figures (nClimDiv or something similar to it) and a different one for the state and regional figures (Drd964x or something similar). To get a national figure using the Drd964x data, one has derive it from the state data. This is done by taking the per decade warming trend for each of the lower forty-eight states and calculating a weighted average, using each states’ respective geographical area as the weightings.

The chart below shows a state by state comparison for the lower forty-eight states of the per decade warming trend for 1895-2012 under both the old and the new data sets.

In the past, alterations and manipulations of the temperature record have been made frequently and are often poorly documented. See D’Aleo and Watts. In this instance, it should be noted, the NCDC made considerable effort to be forthcoming about the data set change. The change was planned and announced well in advance. An academic paper analyzing the major impacts of the transition was written by NOAA/NCDC scientists and made available on the NCDC website. See Fenimore, et. al, 2011. A description of the Drd964x dataset, the nClimDiv Dataset, and a comparison of the two was put on the website and can be see here.

The relative forthcoming approach of the NCDC in this instance notwithstanding, looking at the temperature graphs side by side for the two datasets is highly instructive and raises many questions – the most basic being which of the two data sets is more faithful to reality.

Below are side by side comparisons under the two data sets for California, Maine, Michigan, Oregon and Pennsylvania for the period 1895-2009, with the annual data points being for the twelve month period in the respective year ending in November. The right-side box is the graph under the new nClimDiv dataset, the left-side box is the graph for the same period using the discarded Drd964x dataset. (The reason this particular period is shown is that it is the only one for which I have the data to make the presentation. In December 2009, I happened to copy from the NCDC website the graph of the available temperature record for each of the lower forty-eight states, and the data from 1895 through November 2009 was the most recent that was available at that time.)

I will highlight a few items for each state comparison that I think are noteworthy, but there is much that can be said about each of these. Please comment! 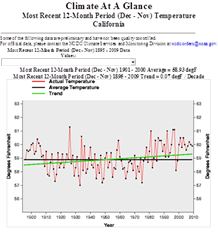 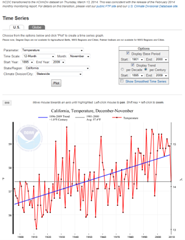 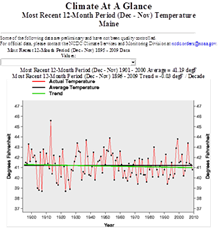 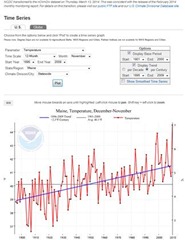 · The change in Maine’s temperature record from the dataset switch is dramatic. The Drd964x data shows a slight cooling trend of negative .03 degrees per decade. The nClimDiv data, on the other hand, shows a substantial .23 degrees per decade warming.

· Notice the three comparatively cold years in the middle of the decade between 1900 and 1910. On the left the first of them is at 39 degrees and the other two slightly below that. On the right, the same years are recorded just above 37 degrees, at 37 degrees and somewhere below 37 degrees, respectively.

· The temperature spike recorded in the left graph between 45 and 46 degrees around 1913 is barely discernable on the graph at the right and appears to be recorded at 41 degrees. 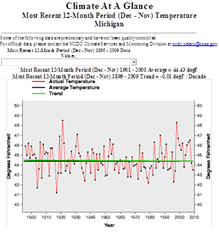 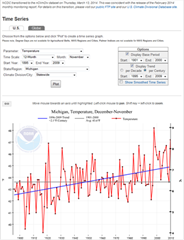 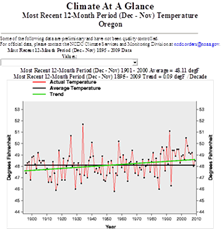 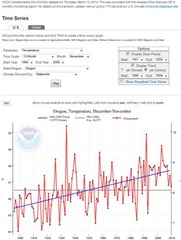 · Notice the first datapoint (1895). The Drd964x dataset records it at slightly under 47.5 degrees. The new dataset states at slightly over 45 degrees, almost 2.5 degrees cooler.

· The first decade appears, on average, to be around 2.5 degrees colder in the new data set than the old.

· As is the case with California, the entire period of the graph is colder in the new data set, but the difference is greater in the early part of the twentieth century, resulting in the 0.09 degrees per decade increase shown by the Drd984x data becoming a 0.20 degree increase per decade in the nClimDiv data. 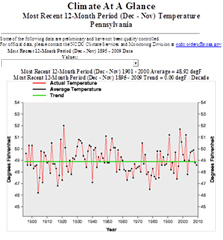 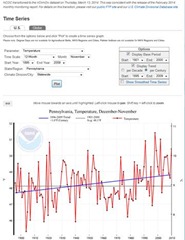 · Pennsylvania showed no warming trend at all in the Drd964x data. Under the nClimDiv data, the state experienced a 0.10 degree per decade warming trend.

· From 1895 through 1940, the nClimDiv data shows on average about 1 degree colder temperatures than the Drd964x data, followed by increasingly smaller differences in later years.

224 thoughts on “One way adjustments: The Latest Alteration to the U.S. Climate Record”