Central to Professor Lovejoy’s paper attempting to determine climate sensitivity from recent temperature trends is the notion that in any 125-year period uninfluenced by anthropogenic forcings there is only a 10% probability of a global temperature trend greater than +0.25 K or less than –0.25 K.

Like most of the hypotheses that underpin climate panic, this one is calculatedly untestable. The oldest of the global temperature datasets – HadCRUt4 – starts only in 1850, so that the end of the earliest 125-year period possible in that dataset is 1974, well into the post-1950 period of potential anthropogenic influence.

However, the oldest regional instrumental dataset, the Central England Temperature Record, dates back to 1659. It may give us some pointers.

The CET record has its drawbacks. It is regional rather than global, and its earliest temperature data have a resolution no better than 0.5-1.0 K. However, its area of coverage is on the right latitude. Also, over the past 120 years, representing two full cycles of the Pacific Decadal Oscillation, its trend is within 0.01 K of the trend on the mean of the GISS, HadCRUT4 and NCDC global terrestrial datasets. It is not entirely without value.

Table 1. Least-squares linear-regression trends (K) on the monthly mean regional surface temperature anomalies from the Central England Temperature dataset for 166 successive 125-year periods from 1659-1784 to 1824-1949. Of these periods, 57 (or 34%) show absolute temperature trends greater than |0.25| K.

Most of the 125-year periods exhibiting a substantial absolute trend occur at the beginning or the end of the interval tested. The trends in the earlier periods capture the recovery from the Little Ice Age, which independent historical records show was rapid. In the later periods the trends capture the rapid warming from 1910-1945.

Subject to the cautions about the data that I have mentioned, the finding that more than a third of all 125-year periods terminating before the anthropogenic influence on global climate began in 1950 suggests the possibility that 125-year periods showing substantial temperature change may be at least thrice as frequent as Professor Lovejoy had assumed.

How, then, can we determine how much of the 20th-century warming was natural? The answer, like it or not, is that we can’t. But let us assume, ad argumentum and per impossibile, that the temperature datasets are accurate. Then one way to check the IPCC’s story-line is to study its values of the climate-sensitivity parameter over various periods (Table 2).

Broadly speaking, the value of the climate-sensitivity parameter is independent of the cause of the direct warming that triggers the feedbacks that change its value. Whatever the cause of the warming, little error arises by assuming the feedbacks in response to it will be about the same as they would be in response to forcings of equal magnitude from any other cause.

This story-line, as far as it goes, seems plausible. But the plausibility is entirely specious. It was achieved by the simplest of methods. Since 1990, the IPCC has all but halved the anthropogenic radiative forcing to make it appear that its dead theory is still alive.

However, with only 0.9 K global warming since the industrial revolution began, the implicit climate-sensitivity parameter would have been 0.9 / 4 = 0.23 K W–1 m2, or well below even the instantaneous value. That is only half the 0.4-0.5 K W–1 m2 that one would expect if the IPCC’s implicit centennial and bicentennial values for the parameter (Table 2) are correct.

In 1990 the IPCC still had moments of honesty. It admitted that the magnitude and even the sign of the forcing from anthropogenic particulate aerosol emissions (soot to you and me) was unknown.

Gradually, however, the IPCC found it expedient to offset not just some but all of the CO2 radiative forcing with a putative negative forcing from particulate aerosols. Only by this device could it continue to maintain that its very high centennial, bicentennial, and equilibrium values for the climate-sensitivity parameter were plausible. 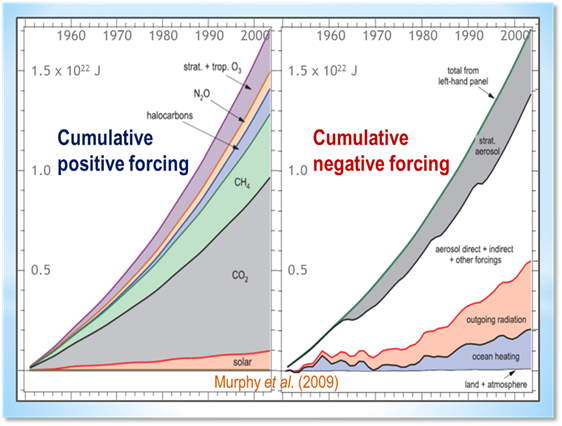 As if that were not bad enough, the curve of global warming in the instrumental era exhibits 60-year cycles, following the ~30-year cooling and ~30-year warming phases of the Pacific Decadal Oscillation (Fig. 3). This oscillation appears to have a far greater influence on global temperature, at least in the short to medium term, than any anthropogenic forcing.

The “settled science” of the IPCC cannot yet explain what causes the ~60-year cycles of the PDO, but their influence on global temperature is plainly visible in Fig. 3.

Figure 3. Monthly global mean surface temperature anomalies and trend, January 1890 to February 2014, as the mean of the GISS, HadCRUT4 and NCDC global mean surface temperature anomalies, with sub-trends during the negative or cooling (green) and positive or warming (red) phases of the Pacific Decadal Oscillation. Phase dates are provided by the Joint Institute for the Study of the Atmosphere and Ocean at the University of Washington: http://jisao.washington.edu/pdo/. Anthropogenic radiative forcings are apportionments of the 2.3 W m–2 anthropogenic forcing from 1750-2011, based on IPCC (2013, Fig. SPM.5). 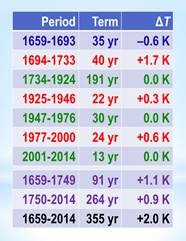 Table 3. Periods of cooling (blue), warming (red), and no trend (green) since 1659. Subject to uncertainties in the Central England Temperature Record, there may have been more warming in the 91 years preceding 1750 than in the three and a half centuries thereafter.

Table 3 summarizes the position. All of the 2 K global warming since 1750 could be simply a slow and intermittent recovery of global temperatures following the Little Ice Age.

There is a discrepancy between the near-linear projected increase in anthropogenic radiative forcing (Fig. 1) and the three distinct periods of global warming since 1659, the greatest of which preceded the industrial revolution and was almost twice the total warming since 1750.

No satisfactory mechanism has been definitively demonstrated that explains why the PDO operates in phases, still less why all of the global warming since 1750 should have shown itself only during the PDO’s positive or warming phases.

A proper understanding of climate sensitivity depends heavily upon the magnitude of the anthropogenic radiative forcing, but since 1990 the IPCC has almost halved that magnitude, from 4 to 2.3 W m–2.

Since just about every adjustment in global temperature over time has had the effect of making 20th-century warming seem steeper than it was, however superficially plausible the explanations for the adjustments may be, all may not be well.

In any event, since the published early-20th-century error interval is of the same order of magnitude as the entire global warming from all causes since 1750, it is self-evident that attempting to derive climate sensitivity from the global temperature trends is self-defeating. It cannot be done.

The bottom line is that the pattern of global warming, clustered in three distinct periods the first and greatest of which preceded any possible anthropogenic influence, fits more closely with stochastic natural variability than with the slow, inexorable increase in anthropogenic forcing predicted by the IPCC.

The IPCC has not only slashed its near-term temperature projections (which are probably still excessive: it is quite possible that we shall see no global warming for another 20 years): it has also cut its estimate of net business-as-usual anthropogenic radiative forcing by almost half. Inch by inch, hissing and spitting, it retreats and hopes in vain that no one will notice, while continuing to yell, “The sky is falling! The sky is falling!”.

A happy Easter to one and all.

100 thoughts on “Can we deduce climate sensitivity from temperature?”