Threads of superheated gas and magnetic fields are weaving a tapestry of energy at the center of the Milky Way galaxy. A new image of this new cosmic masterpiece was made using a giant mosaic of data from NASA’s Chandra X-ray Observatory and the MeerKAT radio telescope in South Africa.

The new panorama of the Galactic Center builds on previous surveys from Chandra and other telescopes. This latest version expands Chandra’s high-energy view farther above and below the plane of the Galaxy — that is, the disk where most of the Galaxy’s stars reside — than previous imaging campaigns. In the image featured in our main graphic, X-rays from Chandra are orange, green, blue and purple, showing different X-ray energies, and the radio data from MeerKAT are shown in lilac and gray. The main features in the image are shown in a labeled version.

One thread is particularly intriguing because it has X-ray and radio emission intertwined. It points perpendicular to the plane of the galaxy and is about 20 light years long but only one-hundredth that size in width.

A new study of the X-ray and radio properties of this thread by Q. Daniel Wang of the University of Massachusetts at Amherst suggests these features are bound together by thin strips of magnetic fields. This is similar to what was observed in a previously studied thread. (Both threads are labeled with red rectangles in the image. The newly studied one in the lower left, G0.17-0.41, is much farther away from the plane of the Galaxy.) Such strips may have formed when magnetic fields aligned in different directions, collided, and became twisted around each other in a process called magnetic reconnection. This is similar to the phenomenon that drives energetic particles away from the Sun and is responsible for the space weather that sometimes affects Earth.

A detailed study of these threads teaches us more about the Galactic space weather astronomers have witnessed throughout the region. This weather is driven by volatile phenomena such as supernova explosions, close-quartered stars blowing off hot gas, and outbursts of matter from regions near Sagittarius A*, our Galaxy’s supermassive black hole.

Also labeled in the main image are X-rays reflected from dust around bright X-ray sources (green circles), Sagittarius A*, and, in purple circles and ellipses, the Arches and Quintuplet Clusters, DB00-58 and DB00-6, 1E 1743.1-28.43, the Cold Gas Cloud and Sagittarius C.

Magnetic reconnection events may play a major role in heating the gas existing between stars (the interstellar medium). This process may also be responsible for accelerating particles to produce cosmic rays like those observed on Earth and driving turbulence in the interstellar medium that triggers new generations of star birth.

The image shows that the magnetic threads tend to occur at the outer boundaries of the large plumes of hot gas. This suggests that the gas in the plumes is driving magnetic fields that collide to create the threads.

The paper by Wang describing these results appears in the June issue of the Monthly Notices of the Royal Astronomical Society, and a preprint is available online. NASA’s Marshall Space Flight Center manages the Chandra program. The Smithsonian Astrophysical Observatory’s Chandra X-ray Center controls science from Cambridge, Massachusetts, and flight operations from Burlington, Massachusetts.

Went to the labelled version. It showed me names of clusters I’d never heard of (the Arches Cluster, for instance).

But it didn’t tell me the intensities of these magnetic fields, relative or absolute. No numbers.

Went to the image anticipating wonder. Was impressed with the colour. Left with a sense of wondering “Where’s Sagittarius B?”

they say of one milliGaus order, “magnetic field with its strength > ∼1 mG,”

They’re clearly contrails. By the way, has anybody wondered if the unusually cool and late spring is due to the lack of commercial flying? I have a paper by Minnis in 1993 that suggested it could be a factor in the warming.

I’ve been wondering this too. The airline shutdown after 9/11 was reported at the time to have dropped temperatures by 0.5 deg. Since it was in the popular media, probably F. Also not necessarily accurate at all.

0
DMacKenzie,
Reply to  Robert A. Taylor

Nothing to do with contrails, all politicians and media windbags just took a deep breath of their own hot air…..

That pic is proof that aliens have mag-monopole hyper-drives in their ships.

There was not much about the cause of the magnetic field, their source. The electric universe theory propose they arise from currents (plasma flows) driven by electrostatic potentials.

At least we have an explanation of the “colors” — “pretty pictures” are very sciencey and generate public support for more government spending.

Way too much pretense and speculation in this kind of “science communication” — I don’t think we (humans) have any idea what those images could really mean physically.

So I see no mention of these threads having been predicted by anyone or postulated in any theory of our brilliant astrophysics. Or particle physicists.

Another thing for them to explain and somehow fit into the unified theory. Will they need Dark Magnetism ™ to explain this?

As several have already mentioned, Electric Universe anyone??

So beautiful from a thousand light years away but I imagine we would perish in moment if we were to find ourselves in that neighborhood. Easy to forget how fragile we are.

Yes, we want to view all this from afar. 🙂 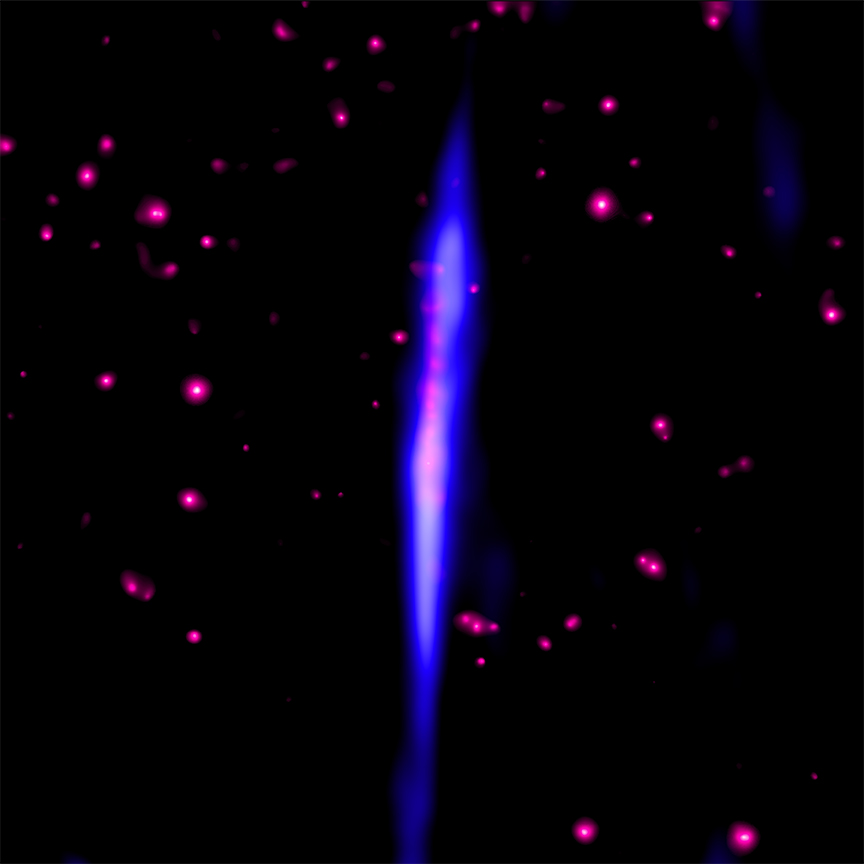 has following description
“In particular, we find that a distinct X-ray thread, G0.17-0.41, is embedded well within a nonthermal radio filament, which is locally inflated. This thread with a width of ∼ 1. 006 (FWHM) is ∼ 2. 06 or 6 pc long at the distance of the GC and has a spectrum that can be characterized by a power law or an optically-thin thermal plasma with temperature > ∼3 keV. The X-ray-emitting material is likely confined within a strand of magnetic field with its strength > ∼1 mG, not unusual in such radio filaments. These morphological and spectral properties of the radio/X-ray association suggest that magnetic field re-connection is the energy source. Such re-connection events are probably common when flux tubes of antiparallel magnetic fields collide and/or become twisted in and around the diffuse X-ray plumes, representing blowout superbubbles driven by young massive stellar clusters in the GC.”
FWHM = FULL WIDTH HALF MAXIMUM units see https://plaskolite.com/docs/default-source/tuffak-assets/technical-documents/diffusion-measurement-test-method-msc180.pdf
GC – galactic centre

Last edited 1 year ago by vuk
3