Comet NEOWISE as seen from the Tidal Basin in Washington, D.C. early Friday morning, July 10th. Up until now, the comet has been a morning object only for viewing in the Northern Hemisphere, but it will actually be visible this week in both the morning and evening sky. Photo courtesy Washington Post – Capital Weather Gang (Twitter)

First, there was Comet ATLAS in April which disappointed sky watchers as it broke apart into pieces.  Then there was Comet SWAN in May which also disintegrated.  And now we have a third comet named NEOWISE and this one is coming through.  In recent days, this comet has been visible shortly before sunrise, but now, it has become an evening object as well and will actually be visible at both ends of the day for the rest of this week. Next week, however, will favor evening viewing as the comet will move north (higher) towards the Big Dipper. For the next few days, if you’re an early riser, look low to the northeast sky before sunrise; if viewing in the evening, look low to the northwest sky shortly after sunset.

Comet NEOWISE is named for the NASA spacecraft mission (Near-Earth Object Wide-field Infrared Survey Explorer) that discovered it back in late March.  Comet NEOWISE which is officially named C/2020 F3 has been surprisingly bright in recent days and the apparent reason is its rather large nucleus. According to spaceweather.com, researchers working with NASA’s NEOWISE spacecraft have analyzed infrared emissions from the comet’s core and have found the nucleus to be ~5 km in diameter which is rather large for a comet approaching this close to the sun. On July 3rd, Comet NEOWISE made its closest pass to the sun at a distance of around 27 million miles and its large nucleus helped it survive the onslaught of heat and also provided the materials for its visible tail. Its closest approach to Earth will come on July 23rd and it won’t back for nearly 7000 years.

Later this month, Comet NEOWISE will climb in the nighttime sky to a position near the Big Dipper. Sky map for July 24 courtesy heavens-above.com

In recent days, Comet NEOWISE has been visible only in the early morning skies, but it ducked below the horizon this weekend, and is now emerging in the night sky as well and will actually be visible at both ends of the day for the rest of this week.  For evening viewing, look low to the northwest sky an hour or so after sunset which would be about 9:30 PM in the eastern US time zone.  The comet should be visible with the naked eye given the right atmospheric conditions (i.e., light pollution, clouds), but it certainly would be easier with binoculars or a telescope.  It will get higher and higher in elevation in coming days and this will allow it to become even easier to see – assuming it all stays together.  In fact, later next week, it will be near the easily identifiable Big Dipper (aka Ursa Major).  As with many comets, the icy nucleus is fragile and prone to breaking apart as it pulls away from the sun so take the opportunity soon to view.  Even if it does break up, it has certainly put on a better show than comets ATLAS and SWAN earlier this year.

Neowise doesn’t disappear below horizon during night, as I realised last night.

Depends on where you live.

Curcumpolar until july 26th for your location

Krishna
On the mornings of July 12 and 13 I got up at 3:30 am (2 hour before sunrise) here in Antwerp, Belgium, and saw NEOWISE. It was just above the skyline just a fraction east of due north, to the left (east ) of Polaris but nearer the horizon. Even that early the skyline was already brightening with nautical dawn, but the comet with it’s tail flowing upward was clearly visible.

For us, looking is over as bad weather from NW is heading toward our region and stays ’til weekend.

Too bad – we were lucky to get a morning with only patchy cloud.
Hopefully we’ll all get another bite of the apple as the comet rises near to the Big Dipper in a few days time.

My fear about weather was right, rain on the evening and during the night.
I hope it’s over as now, over noon, there is some sunshine again.
Hope is, what dies last 😀

KOMO News of Seattle has some interesting photos {40, but I haven’t looked at them all}

Spaceweather gallerie, not bad at all, too
Thanks for you link !

The tails are impressive !

Is NEOWISE on some sort of an eliptical orbit around the sun which takes about 7,000 years to complete? How long has it been part of our solar system? What is its farthest point from the sun in its orbit?

Thanks for that info. It’s fascinating to think about.

If you have a smart-phone the easiest way to find Neowise, is to use Sky Map or similar star-finding app.

The comet is currently leaving the area between constellations Auriga and Gemini, headed for Lynx and Ursa Major. Locate those constellations in the app and then look about half-way between the stars Capella (in Auriga) and Castor (Gemini) and you should see it, if the view is not obscured by trees or clouds.

Sky&Telescope has published a nice map of the comet’s future trajectory through Ursa Major, and beyond:
https://skyandtelescope.org/press-releases/new-bright-visitor-comet-neowise/ #Sky&Telescope webpage

My problem is a hazy sky, while the evening clouds dissolve, haze not. But climbing higher over the horizon the next days, it is less dense, I hope at least 😀

My wife and I climbed the highest hill last night, and looked to the Big Dipper to the NorthWest. There are high hills which appear to by about 10 to 15 degrees above the horizon in our view… so no luck. We will get up there earlier while the comet’s view should be a bit higher. We have had perfect weather in NorCal, not a cloud in the clear skies… But no luck as of yet. Tomorrow morning we will get up early… and look to the North East!

Stellarium is a nice tool for sky discoverings. Just importing C/2020 F3 NEOWISE and you now, where it is.
Thats where I saw first, it’s visible the whole night.

If you can see some of the brighter stars you should have no problem. Neowise is currently about magnitude1, similar to Capella and Castor, which are both in the list of the 20 brightest stars.

I know, but you don’t know our haze, we live some ten meters away from river Rhine in a sink, some more or less hilly around. So yesterday, standing deep, haze more dense, it was just visible at naked eyes, today and tomorrow, Neowise standing some degrees higer, it should be better.

Nearly nothing to see, clouds and fog, just apparitional 🙁

That’s a little WordPress-bug I often had linking to a page.

The link under that seems to have got lost in copying and there is no link to original source article.

Having something a bit more useful that “near the Big Dipper” would be handy. 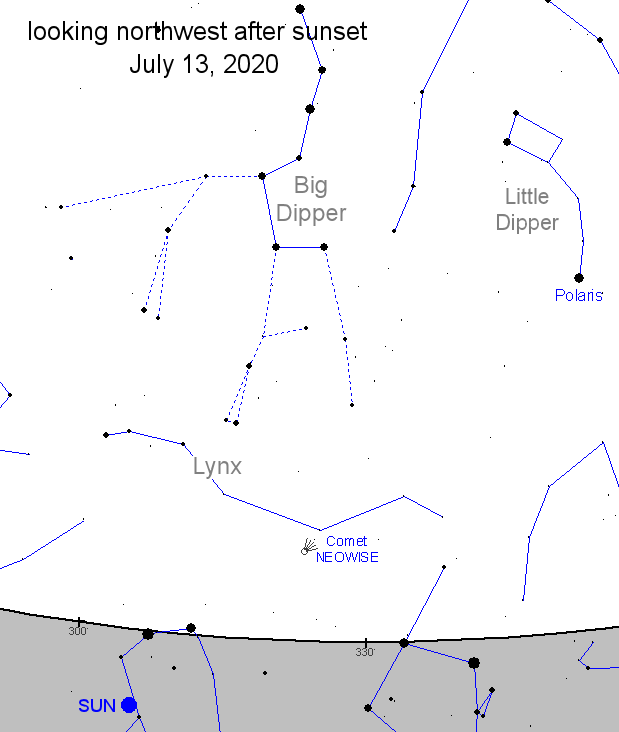 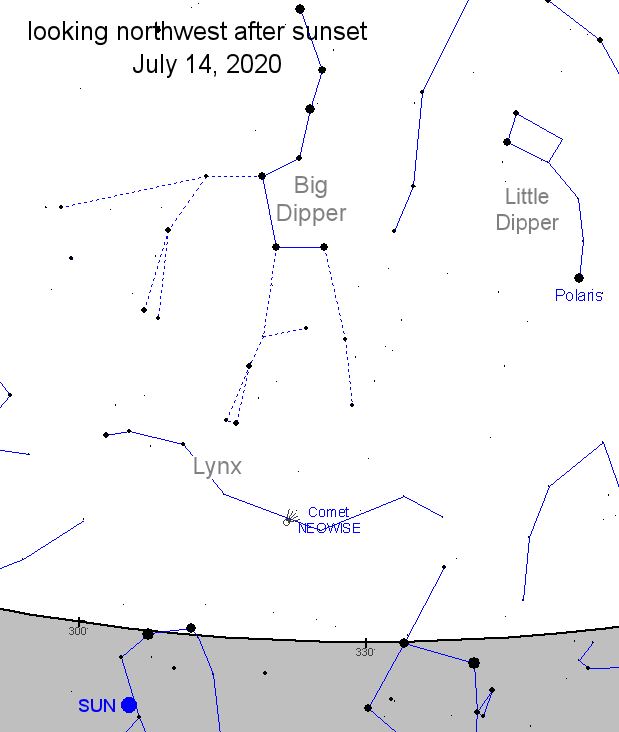 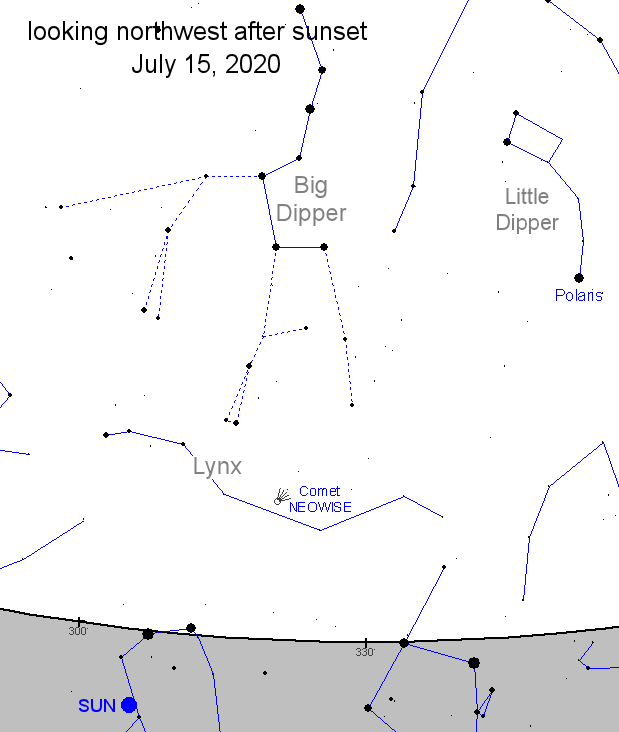 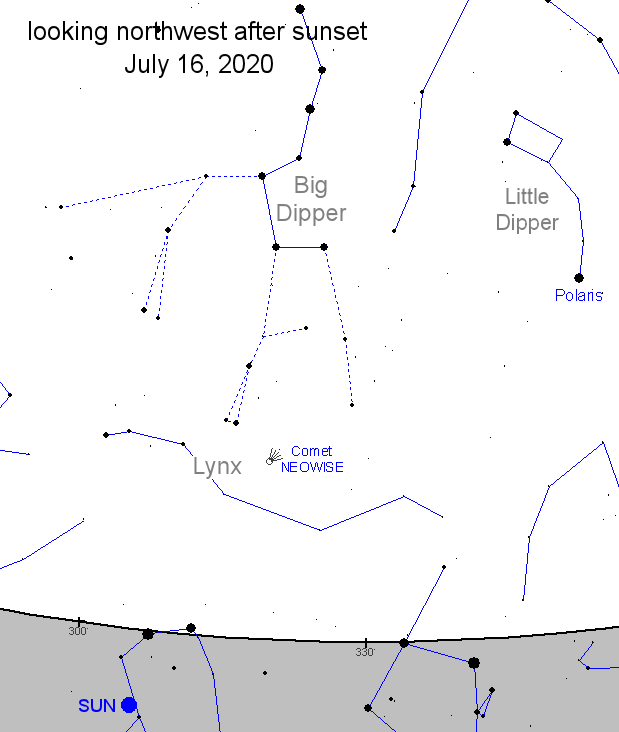 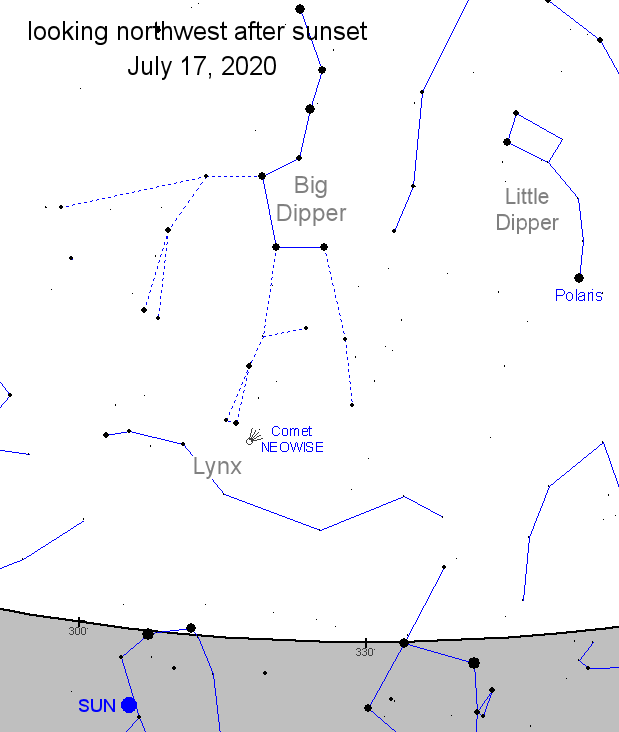 I hope it helps 😀

Is it also visible in the SH? I have not seen it yet. Don’ t know where to look, either.

Time out for SH, unfortunately, afaik

That’s where I live also. It is probably too near the Ursa Major which we cannot see here.

Currently in Auriga, moving towards the big dipper 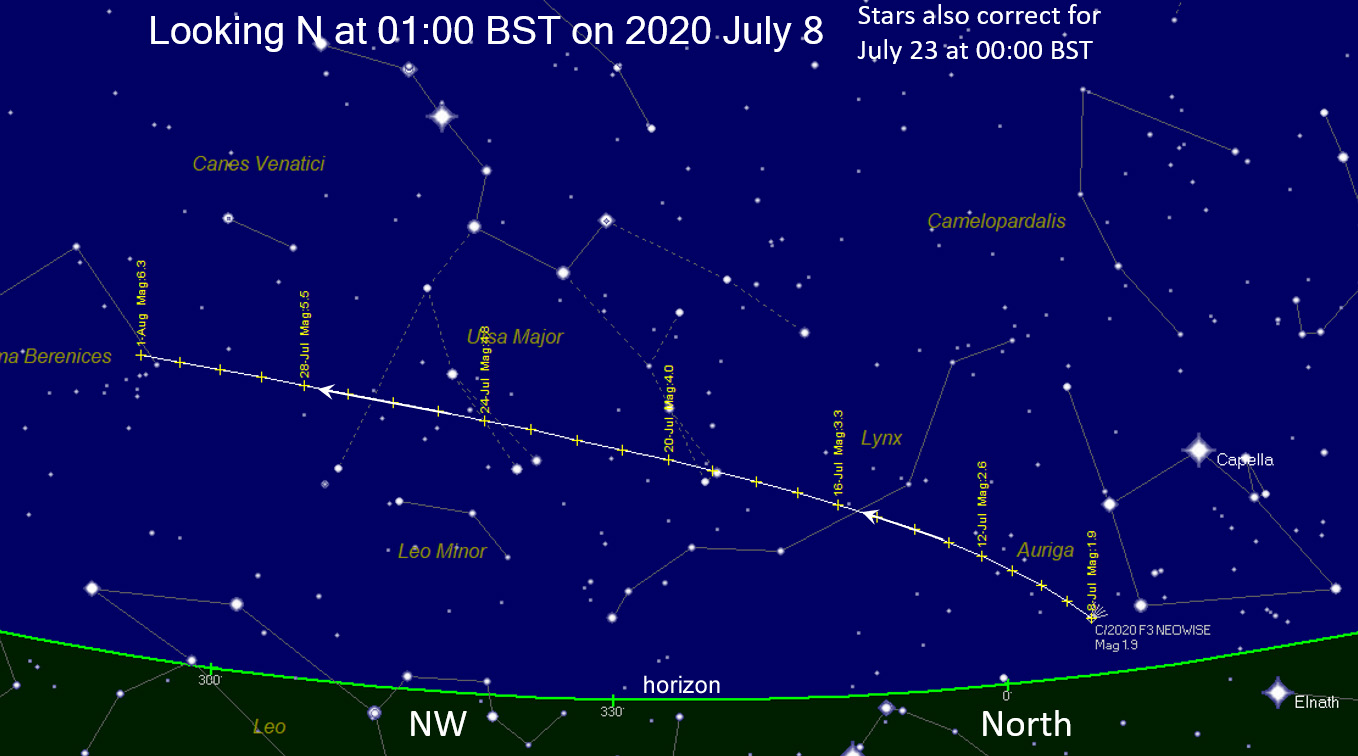 Finder charts here https://theskylive.com/c2020f3-info If you can see the Plough, you can see Comet Neowise.

Plough, Big Dipper, Ursa Major, Panhandle – every northern language has a word or two for it. It really is an eye-catching constellation. Isn’t it great that we now can see it again, thanks only to successful environmental legislation.

I remember air pollution in the northern hemisphere was so bad back in the 1960s that hardly any stars could be seen.

We are about 30 degrees south. Where must I look?

Hi Henry I checked using an astronomy app, but unfortunately, when the comet is above the horizon in South Africa, so is the sun, so you are not able to see it unless there were an eclipse.

That’s not quite true. The comet is never above the horizon, day or night, in South Africa

Couldn’t see it with mostly clear skies and a clear horizon here at 40 North.

BTW, the article states that 9:30 is an hour after sunset in the Eastern time zone. Well, in Indiana, 9:30 is barely 20 minutes after sunset and still quite light. Eastern is a giant time zone, and why we’re a part of it, I haven’t figured out.

Grabbed my 10-power binocs this evening around 10, walked out my front door, put my binocs to my eyes in a north-northwest direction and nailed it! Surprisingly easy!

For me, it was about 353 degrees NorthWest. And I saw it at 6:35 with bright skies. Though I live in perfectly sunny clear NorCal.

0
The Depraved and MOST Deplorable Vlad the Impaler

As I write, it is late afternoon on Tuesday, 14 July, here in central Wyoming. My youngest grandson and I went out on Monday evening, and despite some scattered clouds, had a spectacular view of NEOWISE. We are hoping to track it every clear night.

We first saw it about an hour after local sunset. He says he could see it with the unaided eye (he is 11, and I’m in my early 70’s) but I could only find it with the 8 x 50 binocs we brought along. The photos on SpaceWeather (dot) com are spectacular. I highly recommend that if you are unable to see it for yourself, enjoy the photos being posted. Once I showed my grandson the photos, he was DETERMINED that we were going to see it for ourselves. I knew where to look, and he did the looking, so a very symbiotic relationship between us.

Hope everyone has great seeing, and mostly clear skies,

Thank you everyone for all the sky map links. I tried to find it last night around midnight with no luck (near Raleigh NC ~36N), going to keep trying, better armed with info this time.

Judging from it being about 10 deg above the horizon in a northerly direction here at latitude 44 deg, it may have been below the horizon at the time you looked for it.

I spotted it with binoculars about one hour after local sunset, and I just barely, kind of made it out with “averted imagination” (a viewing technique where you don’t look directly at an object to use your more sensitive off-axis vision, and you say “yeah, I see it” when someone points in the direction where it is supposed to be).

Thank you Paul – I managed to get a good look at it last night!

COP26 heading for the rocks?

What it is like to be a climate realist

Washington Examiner: Climate activists invest in property on beaches they say are disappearing