My friend Joe D’Aleo (co-founder of the Weather Channel with the late great John Coleman) have written a fantastic book. John made a lot of headway on the book just before he died, and Joe took it to completion. Joe writes:

The Weather Channel was the realization of a dream of one incredible man that became a shared vision of a large team of wonderful, courageous and talented individuals that assembled from all corners of the country in many different disciplines to undertake something special and unprecedented. 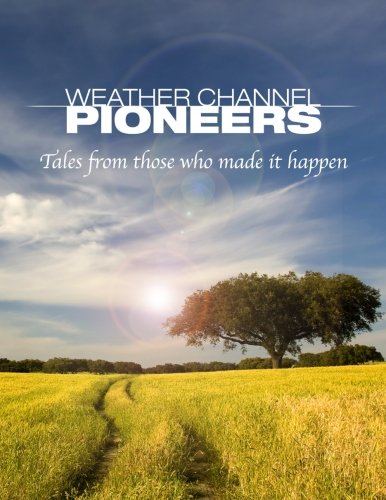 We like to call these unique people the “Weather Channel Pioneers”. To pave that road to success in the early days, we pulled off everyday miracles, overcame many obstacles and changed the paradigms for technology, the delivery of life-saving information and on-air weather presentations all while informing and entertaining our viewers. It was a time and a team like no other. In this book, we immortalize that effort with their personal stories and memories of that incredible journey.

“Even though I didn’t start my TWC journey until 1986, I had no idea as a young man of 22 years what a wonderful opportunity I had been given to learn about life and meteorology from many of these TWC Pioneers. There are too many to name, but dozens of these men and women had a profound and lasting influence on the broadcaster I am today. What an incredible trip down memory lane revisiting the heart and soul of The Weather Channel as it was being born and as it became one of the most trusted brands in the world. These TWC pioneers didn’t just start a cable TV weather channel, they saved lives and created a mission of service which still resonates with millions of people to this day.”

I had a hand in the early TWC success. I’ll never forget the first time I saw TWC. It was at the county fair at the business pavilion, and a local company was selling “satellite TV”.

They had their display tuned to “The Weather Channel” and I must have stood there a full 30 minutes watching it. I was mesmerized. I knew then I wanted to be a part of it somehow, and later, my own dream came true when I provided equipment to initially get WSI satellite images into their Quantel still store (which handled the on-air sequences) and later via an IBM PC, which had the very first PC based computer frame-buffer graphics card with a Genlock capable (used to synchronize to the other TV devices) RGB to NTSC encoder to make composite video and keep it synchronized with the other video devices in the studio. It’s something that I was thrilled to design.

Note the “breadboarding area” on the top card. The reason was that some video switchers (like models from Grass Valley Group) had a specific requirement for horizontal blanking width, which sometimes differed based on the setup at the TV studio. In the digital to analog world, sometimes I’d have to design analog circuitry “on the fly” to compensate for these nuances so that when this device was switched to while in the chroma-key, there wasn’t a slight horizontal tick, but a seamless transition. Back then, making NTSC television work reliably was a bit of an art-form. 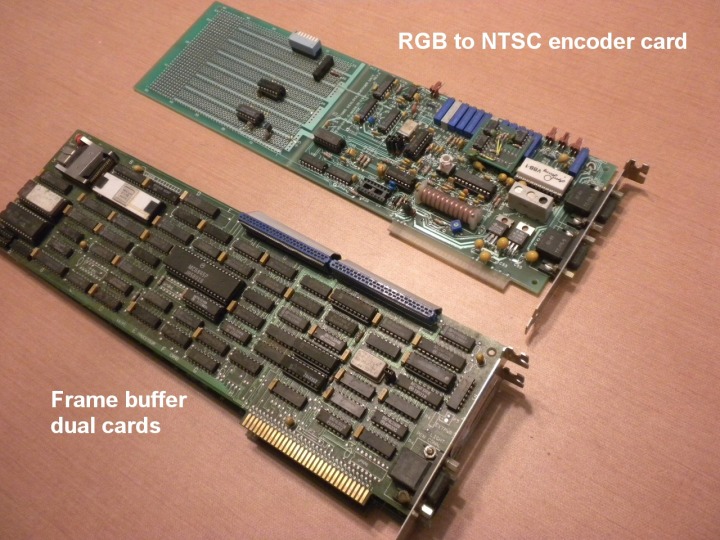 That story is in the book, as told by John Coleman. There’s many other stories where they had to improvise and create things that didn’t exist. Mind you, when TWC first started, the way National Weather Service disseminated weather information was by Teletype running at 58.65 baud (there’s a whole untold story behind that weird number too) and wide-format wet paper fax machines sold by Alden Corporation, which produced output that looked like this: 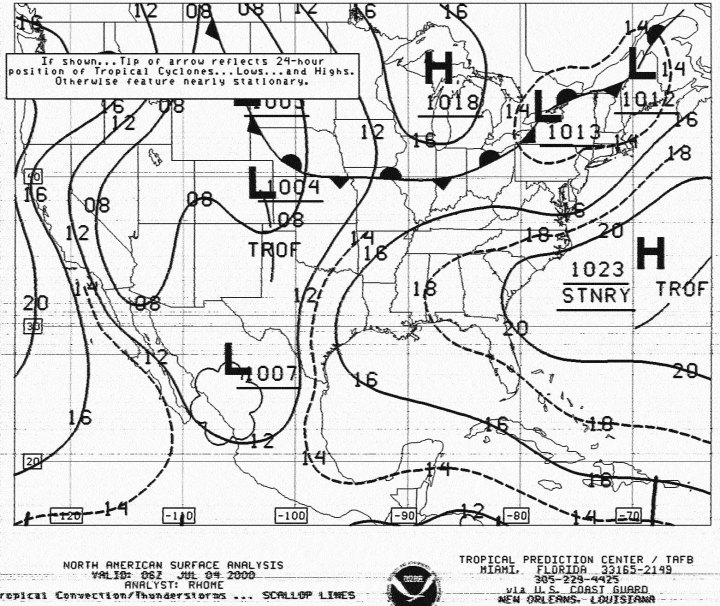 What TWC did back then and the demands they made, changed the way the NWS did business with the public – and for the better.

I was honored to be working with the TWC team back then, and while I would have loved to be on-air, circumstances at the time just didn’t mesh. But I did gain two life-long friends; Joe D’Aleo and John Coleman, who joined me in the fight against the often ridiculous climate change arguments we fight here daily.

This book is dedicated to the pioneers. It’s a profile in vision, innovation, and courage. I highly recommend it.

So how did the Weather Channel get handed over to climate alarmists? Seems ironic.

Maybe the acquisition by NBC? 🙂

He who has the gold makes the rules, and when NBC universal bought it, it really went to hell. That ushered in the era of “reality TV” with horrid shows on TWC like “Fat Guys in the Woods” -yechh!
https://weather.com/tv/shows/fat-guys-in-the-woods

“The Weather Company’s primary journalistic mission is to report on breaking weather news, the environment and the importance of science to our lives. This story does not necessarily represent the position of our parent company, IBM.” Similar (?) problem with Weather Underground, lost some reporting, too many juvenile wows. Still useful site and comments, a few skeptical. Been watching and hiding from weather since the application of radar. Improvements amazing, TWC included. Happens too often, guess it must be entropy.

I’ve also notice Weather Underground seems to be going down the tubes since it was acquired by the Weather Channel. I still post my home weather station data there, but would love to see a better alternative more like the old WU.

When I was applying for jobs out of state, I used to go to the the weather underground to research the climate of the city. They used to have charts where I could pull up weather averages, things like the average daily highs and lows for every day of the year. As well as rain and snow fall for every day of the year.
Last time I checked the site, I couldn’t find those charts anymore.

@MarkW
The weather history for a location is still there, you just need to click on the link directly beneath the station name. In other words the URL changes from the home page:
https://www.wunderground.com/weather/us/vt/east-dover/KVTEASTD5?cm_ven=localwx_today
to
https://www.wunderground.com/personal-weather-station/dashboard?ID=KVTEASTD5&cm_ven=localwx_pwsdash
It always amazes me when someone changes the entire layout of a site (just cause they can) and commit brand suicide in the act.

I remember watching the Weather Channel frequently, along with MTV, when I first got cable TV in the early 1980’s. John Hope was my favorite during hurricane season.

I learned it: “Never The Same Color” …same diff.

Always enjoyed TWC back when they were concerned with passing along meteorological information. I also learned to appreciate and became a fan of contemporary jazz (local forecast) music. Sadly both are gone these days :-/

As luck would have it, The Weather Channel was just sold (again).
https://www.bloomberg.com/news/articles/2018-03-22/funnyman-byron-allen-buys-the-weather-channel-for-300-million
Selling price: $300M. Apparently, most of the assets had been stripped off when IBM bought the online presence and all the underlying data. The Weather Channel doesn’t even own its own data anymore.
Haven’t watched it in years. My local provider doesn’t even carry it (they carry Accuweather), and as far as I can figure, none of the subscribers care.
It was nice in the good ole’ days though. I can vaguely remember when MTV had music, The Weather Channel had weather, and ESPN had sports. Why…I think there was even a cable News channel that carried news!

Watched pretty much the same as you for the same reasons, except for MTV. Probably because I am too old but have always blamed MTV and music videos for the destruction of good music. It all became “I can’t sing look at my tits, I can’t dance look at my ass”. Quote from Dana Carvey. TV weather all sucks now and Fox is as close to news as you can get on cable.

I remember those days. I think that was before the rapid fall of trust, value, and credibility of the media. The model is broken badly now.

“The Comcast-Blackstone-Bain-led group had purchased the Weather Channel in 2008 for about $3.5 billion. A spokesman for Blackstone declined to comment.“
Even if they sold the web domain and data services to IBM for a few hundred million, Blackstone-Bain lost over 90% on that deal.

I liked watching TWC in the mid-90’s to early 2000’s for many reasons.
I can name a few:
– Sharon Resultan
– Kelly Cass
– Jill Brown
– Julie Martin
– Heather Tesch…
sigh. those were the days.

I’m not sure if this is good or bad for the current hyped and scare weather channel. The last time I saw this channel on TV was in a doctor’s office and they were making AGW excuses for nor’easters a few years back. They need to apologize publicly to get me back….ever.
https://www.cnbc.com/2018/03/22/byron-allens-entertainment-studios-buys-the-weather-channel.html

This would be a good time for an online survey of trust level of news and information outlets.

Anthony,
“making NTSC television work reliably was a bit of an art-form.” is an understatement!
And don’t get me with “PAL = Perfect, Always Lovely” I see the 50hz and that 8 field blanking sequence made editing a pain!
SECAM = Something Essentially Contrary to the American Method
Set up many a local Weather Channel service.

I’m thankful for what The Weather Channel was.
It has become The Storm Channel.

Not anymore.
PS Jim, why did they stop giving the record highs and lows for the day on the “Local on the Eights”?
No longer about the weather?

I used to watch TWC and HLN (Headline News) but stopped when the channels became The Least Trusted brands in the world. I haven’t watched either channel in a long time.

The Left, spear-headed by The Podesta Group, purposefully hijacked those trusted brands to push an ideological message. They infiltrated Boards of directors, they got true believers hired and promoted. Then they (ab)used that trust to their advantage, especially during the latter Bush years and then aggressively during the Reign of Obama.
That trust is gone now. Not even a cent left in the trust bank accounts of TWC or CNN HLN.

Today’s TWC is leaching off the legacy greater men.

It is obvious that these guys just can not read thermometers and barometers as well as NBC can.
These delicate instruments MUST be read with ALARM!!!

WU went down the toilet when they changed the look to BLING thing, and permanently had that idiot AGW enthusiast Masters on there brainwashing all and sundry with the “settled science” bit, despite being unable to explain the noticeable drop in extreme weather and damaging US hurricanes.

I bought it. I can’t wait to read it. I love stories like this along the same lines as “The Soul of a New Machine.”
I had to stop watching the Weather Channel. It’s like 24/7 Wicked Witch of the West stuff with all the sane meteorologists locked up in the dungeon. ( I apologize to any sane currently employed meteorologists not in the dungeon ). And for that matter, seriously, bomb cyclone ??!!?? It’s a northeaster and storms do not have targeting capabilities.
Thanks Joe for making this story available.

At least it’s in the hands of a comedian now to go with the laughable climate scare stories on that channel.