Yellowstone’s last supereruption occurred 631,000 years ago. And it’s not the planet’s only buried supervolcano. Scientists suspect that a supereruption scars the planet every 100,000 years, causing many to ask when we can next expect such an explosive planet-changing event.

To answer that question, scientists are seeking lessons from Yellowstone’s past. And the results have been surprising. They show that the forces that drive these rare and violent events can move much more rapidly than volcanologists previously anticipated.

The early evidence, presented at a recent volcanology conference, shows that Yellowstone’s most recent supereruption [let’s use “caldera forming eruption”] was sparked when new magma moved into the system only decades before the eruption. Previous estimates assumed that the geological process that led to the event took millenniums to occur.

There are some ambiguities in the text:

The third paragraph helps explain what they’re trying to say.

Unfortunately, from that article, the follow-on stories have spawned headlines like:

Yellowstone Supervolcano May Rumble to Life Faster Than Thought

Yellowstone Volcano Could Erupt Much Sooner Than Previously Thought, According to New Study

I’m writing this to tell the WUWT community that “No, don’t worry about a supervolcano eruption at Yellowstone anytime soon.” And spread the word. If you must, feel free to worry about a more conventional eruption (there are places that show some 23 layers of ash fall since the current caldera formed). I finally visited the Norris Geyser Basin the last time I was there, that place is creepy, feel free to worry about a steam explosion. Only half the basin was open the other half was closed because the ground was hot enough to melt shoe soles and there could have been a steam explosion at any time.

The hottest and most acidic part is called the Porcelain Basin, and the thermophilic bacteria and algae can’t live there, leaving the area even more uninviting: 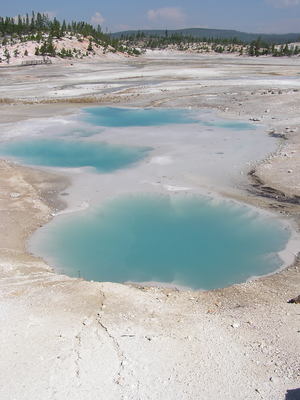 The paper that started this is Hannah Shamloo, Christy Till: Petrologic Insights into the Timing and Triggering Mechanism of the Lava Creek Tuff Supereruption, Yellowstone Caldera, WY, USA. It’s paywalled, and the abstract doesn’t provide much information beyond making it clear that they’re talking about activity leading up to an eruption.

A paper I frequently cite (and lose, and find) that makes it clear there’s no caldera forming eruption in sight, is the USGS’s Preliminary Assessment of Volcanic and Hydrothermal Hazards in Yellowstone National Park and Vicinity. While the paper is a decade old now, the new paper doesn’t affect it much.

Update: Snopes has written a useful article on the subject, titled New Research Suggests Massive Yellowstone Eruption Could Occur Sooner Than Expected?, subtitled Research documenting chemical changes in the Yellowstone magma chamber prior to a past eruption does not affect an eruption’s future probability.

Post posting edits: Added forgotten link to the Shamloo and Till paper, fixed typo (erupotion) and put the editorial note within [] instead of (), added update to reference the Snopes article.