Animals and plants are seemingly disappearing faster than at any time since the dinosaurs died out, 66m years ago. The death knell tolls for life on Earth. Rhinos will soon be gone unless we defend them, Mexico’s final few Vaquita porpoises are drowning in fishing nets, and in America, Franklin trees survive only in parks and gardens.

Yet the survivors are taking advantage of new opportunities created by humans. Many are spreading into new parts of the world, adapting to new conditions, and even evolving into new species. In some respects, diversity is actually increasing in the human epoch, the Anthropocene. It is these biological gains that I contemplate in a new book, Inheritors of the Earth: How Nature is Thriving in and Age of Extinction, in which I argue that it is no longer credible for us to take a loss-only view of the world’s biodiversity.

Climate change has brought tree bumblebees from continental Europe to my Yorkshire garden in recent years. They are joined by an influx of world travellers, moved by humans as ornamental garden plants, pets, crops, and livestock, or simply by accident, before they escaped into the wild. Neither the hares nor the rabbits in my field are “native” to Britain.

Many conservationists and “invasive species biologists” wring their hands at this cavalcade of “aliens”. But it is how the biological world works. Throughout the history of the Earth, species have survived by moving to new locations that permit them to flourish – today, escaped yellow-crested cockatoos are thriving in Hong Kong, while continuing to decline in their Indonesian homeland.

Nonetheless, the rate at which we are transporting species is unprecedented, converting previously separate continents and islands into one biological supercontinent. In effect, we are creating New Pangea, the greatest ecological pile-up in the Earth’s long history. A few of the imported species cause others to become extinct – rats have driven some predator-naïve island birds to extinction, for example. Ground-nesting, flightless pigeons and rails that did not recognise the danger were no match for a deadly combination of rodents and human hunters.

But despite being high-profile, these cases are fairly rare. In general, most of the newcomers fit in, with limited impacts on other species. The net result is that many more species are arriving than are dying out – in Britain alone, nearly 2,000 extra species have established populations in the past couple of thousand years.

There is no doubt that the rate at which species are dying out is very high, and we could well be in for a “Big Sixth” mass extinction. This represents a loss of biological diversity. Yet, we also know that the Big Five mass extinctions of the past half billion years ultimately led to increases in diversity. Could this happen again? It seems so, because the current rate at which new animals and plants (such as the apple fly, the Italian sparrow and Oxford ragwort) are coming into existence is unusually high – and it may be the highest ever. We are already on the verge of Genesis Number Six – a million or so years from now, the world could end up supporting more species, not fewer, as a consequence of the evolution of Homo sapiens.

This article was originally published on The Conversation. Read the original article.

For starters, the use of the phrase Anthropocene is, at best, silly.  The Holocene *is* the Anthropocene.  And, the description of the current species extinction rate as a “mass extinction” is totally wrong.  Mass extinctions are marked by the loss of not just species; but by entire genera, families, orders, classes and sub-phyla.

The Late Pleistocene to Early Holocene extinction is not classified as a mass extinction, despite the loss of many genera.

It’s been quite a while since a genus was declared extinct, and it might actually be extant… just hiding…

Critically endangered African antelope is last species of its kind.

For the first time in 75 years, an entire genus of mammal may go the way of the dodo—unless a new conservation effort shepherded by Somalian herders succeeds.

The hirola, a large African antelope known for its striking, goggle-like eye markings, is the only remaining species in the genus Beatragus—and its numbers are dwindling fast, conservationists say.

The last mammal genus to blink out was Thylacinus, in 1936, with the death of the last Tasmanian tiger. A genus is a taxonomic ranking between species and family.

There are 30 genera of antelope and that doesn’t count American antelope, which technically aren’t antelope… So the demise of the hirola won’t be the death knell for antelope.

Reports of the Tasmanian tiger’s extinction might be just a bit premature.

The current extinction isn’t exactly taking a huge toll on any taxonomic units above the species level.

So, this image is totally meaningless for at least three reasons:

Earth Is Not in the Midst of a Sixth Mass Extinction

“As scientists we have a responsibility to be accurate about such comparisons.”

At the annual meeting of the Geological Society of America, Smithsonian paleontologist Doug Erwin took the podium to address a ballroom full of geologists on the dynamics of mass extinctions and power grid failures—which, he claimed, unfold in the same way.

I had written to Erwin to get his take on the contemporary idea that there is currently a sixth mass extinction under way on our planet on par with the so-called Big Five mass extinctions in the history of animal life. Many popular science articles take this as a given, and indeed, there’s something emotionally satisfying about the idea that humans’ hubris and shortsightedness are so profound that we’re bringing down the whole planet with us.

“Many of those making facile comparisons between the current situation and past mass extinctions don’t have a clue about the difference in the nature of the data, much less how truly awful the mass extinctions recorded in the marine fossil record actually were,” he wrote me in an email. “It is absolutely critical to recognize that I am NOT claiming that humans haven’t done great damage to marine and terrestrial [ecosystems], nor that many extinctions have not occurred and more will certainly occur in the near future. But I do think that as scientists we have a responsibility to be accurate about such comparisons.”

“So you can ask, ‘Okay, well, how many geographically widespread, abundant, durably skeletonized marine taxa have gone extinct thus far?’ And the answer is, pretty close to zero,” Erwin pointed out. In fact, of the best-assessed groups of modern animals—like stony corals, amphibians, birds and mammals—somewhere between 0 and 1 percent of species have gone extinct in recent human history. By comparison, the hellscape of End-Permian mass extinction claimed upwards of 90 percent of all species on earth.

The Atlantic and WUWT

Note that the “Big 5” and other real extinction events put significant dents into the number of genera and how biodiversity has literally exploded since the end of the Jurassic Period: 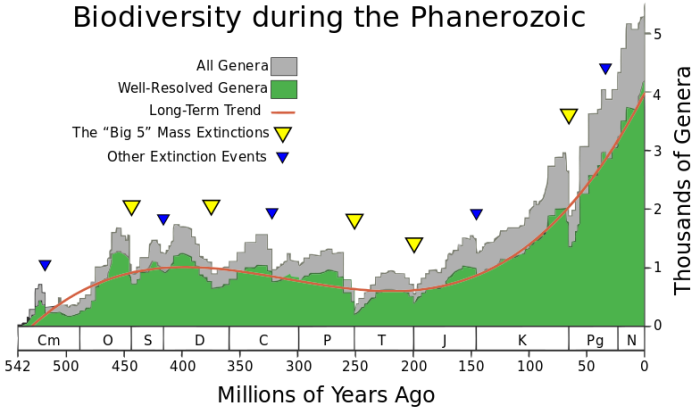 The K-T (End-Cretaceous mass extinction) was just a “bump in the road” compared to the End-Permian extinction.

So, rather than whine about the occasional loss of a toad species that looks just like the un-endangered toad species in the next valley, we should celebrate the Carbon-Fed* Sixth Mass Genesis… We could even call it the Anthropocene Explosion!

*Pretty well all life on Earth is carbon-fed in one way or another.