Plants have been helping to offset climate change, but now it’s up to us 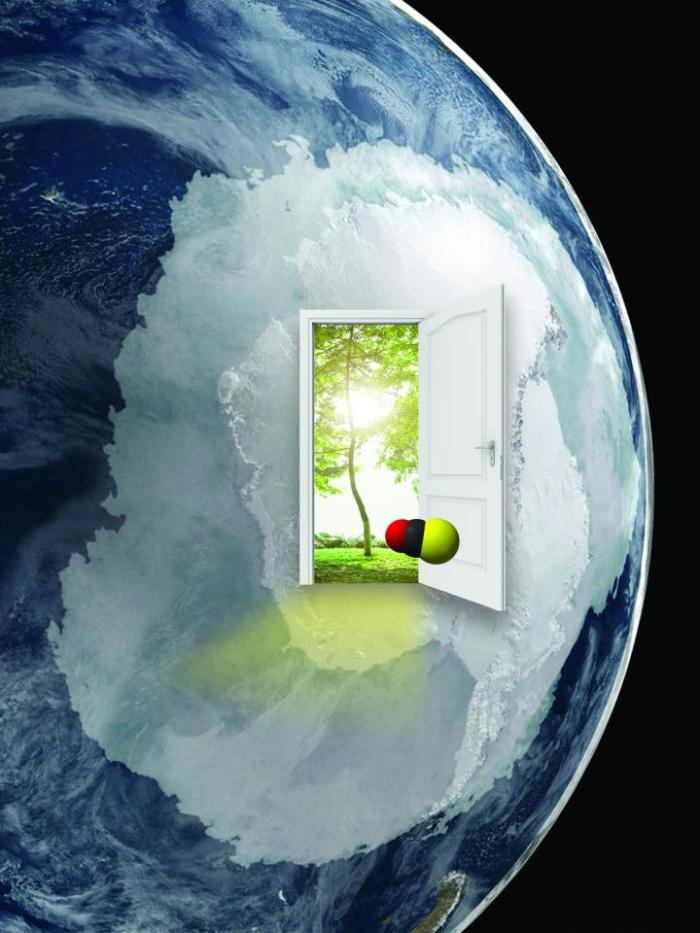 An artist’s conception representing this work. The concentration of the atmospheric trace gas carbonyl sulfide is influenced by the terrestrial biosphere’s photosynthetic activity and its variation over centuries is preserved in Antarctic snow and ice, which provides insight into the response of key process to climate and environmental change.

Washington, DC — Plants are currently removing more CO2 from the air than they did 200 years ago, according to new work from Carnegie’s Joe Berry and led by J. Elliott Campbell of UC Merced. The team’s findings, which are published in Nature, affirm estimates used in models from the Intergovernmental Panel on Climate Change.

Plants take up carbon dioxide as part of the process of photosynthesis — a series of cellular reactions through which they transform the Sun’s energy into chemical energy for food. This research from Campbell, Berry, and their colleagues constructs a new history of global changes in photosynthetic activity.

Just as plants in actual glass greenhouses grow faster and more profusely when provided with elevated levels of CO2, plants in natural ecosystems have been expected to grow faster as the concentration of CO2 in the global atmosphere increases. At the global scale, this effect could offer some stability to the climate system by countering increased human emissions of CO2.

The magnitude of this effect is currently under debate. Could it be as large at the global scale as it is in small-scale greenhouse experiments? Or are other factors limiting the global system’s response to increased greenhouse gas emissions? A long-term record, similar to what we have for CO2 and temperature, is needed to address this large uncertainty in climate change projections.

“We’ve done something new here,” Campbell said. “Reliable measurements of photosynthesis are typically made at the leaf-level. But you can’t get the big picture that way, and we need to know what the Earth as a whole is doing and how it has responded through time.”

The team made use of previous work showing that the concentration of the atmospheric trace gas carbonyl sulfide can be used to infer the level of global photosynthesis. They constructed a history of its concentration using air trapped in Antarctic ice and snowpack for centuries, infrared spectra of the atmosphere taken by astronomers since the 1970s, and data from a National Oceanic and Atmospheric Administration greenhouse gas sampling network, which began monitoring carbonyl sulfide in the late 1990s.

The results show that global photosynthesis was stable for hundreds of years before the industrial revolution, but then grew rapidly throughout the 20th century. The recent increases in photosynthesis correlate with the increases in atmospheric carbon dioxide due to fossil fuel burning.

“The phenomenon of plants pulling carbon dioxide out of the air has been included in climate change models for many years,” Berry explained, “but it has always been difficult to know whether the strength of this effect is being modeled in a realistic way. Our new results affirm that the range of models used in the last IPCC assessment did, in fact, include realistic estimates of the sensitivity of global photosynthesis to CO2.”

“It may be tempting to interpret these results as evidence that Earth’s dynamics are responding in a way that will naturally stabilize CO2 concentrations and climate,” Berry added. “But the real message is that the increase in photosynthesis has not been large enough to compensate for the burning of fossil fuels. Nature’s brakes are not up to the job. So now it’s up to us to figure out how to reduce the CO2 concentration in the atmosphere.”

101 thoughts on “Dueling press releases: Plants have been helping to offset climate change, but now it’s up to us”