One of the main lines of evidence used by the Obama administration to justify its global warming regulations doesn’t exist in the real world, according to a new report by climate researchers. 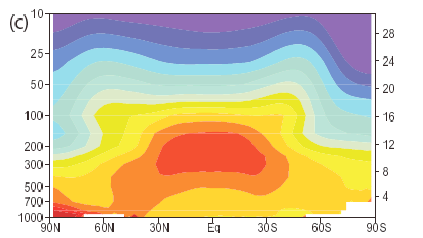 What the tropical hotspot is supposed to look like. Graphic courtesy Dr. David Evans

Researchers analyzed temperature observations from satellites, weather balloons, weather stations and buoys and found the so-called “tropical hotspot” relied upon by the EPA to declare carbon dioxide a pollutant “simply does not exist in the real world.”

They found that once El Ninos are taken into account, “there is no ‘record setting’ warming to be concerned about.”

“These analysis results would appear to leave very, very little doubt but that EPA’s claim of a Tropical Hot Spot (THS), caused by rising atmospheric CO2 levels, simply does not exist in the real world,” reads the report by economist James Wallace, climatologist John Christy and meteorologist Joseph D’Aleo.

“Also critically important, even on an all-other-things-equal basis, this analysis failed to find that the steadily rising atmospheric CO2 concentrations have had a statistically significant impact on any of the 13 critically important temperature time series analyzed,” they wrote.

When EPA released its CO2 endangerment finding in 2009, it used three lines of evidence to bolster its argument that greenhouse gases threatened human health through global warming.The crux of EPA’s argument rested on the existence of a “tropical hotspot” where global warming would be most apparent. That is, there should be enhanced warming in the tropical troposphere — the “fingerprint” of global warming.

EPA’s endangerment finding is the legal basis for agency global warming regulations, including the Clean Power Plan (CPP) now being fought over in federal court. CPP aims to cut power plant carbon dioxide emissions 32 percent by 2030 and could cost $41 billion a year, according to independent estimates.

D’Aleo and his colleagues looked at the data and controlled for El Ninos and La Ninas. What they found was that once natural oceanic warming and cooling events are accounted for, there’s no warming trend.

“El Nino is not by any means new,” D’Aleo told The Daily Caller News Foundation. “The El Ninos and La Ninas do not occur at a regular frequency but tend to cluster as we showed in our paper.”

Tropospheric temperatures are mainly measured by satellites and weather balloons, which collect data from the lowest few miles of the atmosphere. Satellites already show only slight warming since 1979, but they are sensitive to El Ninos and La Ninas.

Removing El Ninos and La Ninas from tropospheric temperatures creates “temperature time series each having a flat trend.” Basically, D’Aleo and his colleagues found oceanic warming events are responsible for virtually all the warming since 1977 when El Ninos became more frequent and stronger.

On the flip side, the recent “hiatus” in global warming can be explained by more frequent La Ninas, according to D’Aleo.

With El Ninos and La Ninas adjusted out of the data, only volcanoes are left — base on EPA assumptions — to impact the climate, and D’Aleo’s report acknowledges “it was still possible that the volcanic activity was hiding CO2’s impact.”

Volcanic aerosols can have a cooling effect on global average temperature; the 1991 eruption of Mt. Pinatubo caused a dip in satellite temperature data that lasted for a couple years.

“The temperature data measurements that were analyzed were taken by many different entities using balloons, satellites, buoys and various land based techniques,” reads the report. “Needless to say, if regardless of data source, the results are the same, the analysis findings should be considered highly credible.”

Climate scientists have been debating for years over the existence of the “tropical hotspot.”

Christy, who co-runs the premier satellite temperature dataset at the University of Alabama in Huntsville with climatologist Roy Spencer, has presented evidence that climate models overpredicted warming in the tropical troposphere.

Ross McKitrick, an environmental economist at the University of Guelph in Canada, also ran the numbers and found climate models overestimated warming in the tropical troposphere.

McKitrick provided evidence of a phase shift in 1977 from dominant [La] Ninas to El Ninos — just like D’Aleo, Christy and Williams found.

“Over the 55-years from 1958 to 2012, climate models not only significantly over-predict observed warming in the tropical troposphere, but they represent it in a fundamentally different way than is observed,” McKitrick wrote in a 2014 study.

Originally published at The Daily Caller

The analysis above has shown many times over that the THS simply does not exist. Recall from Section IV:

The proper test for the existence of the THS in the real world is very simple. Are the slopes of the three trend lines (upper & lower troposphere and surface) all positive, statistically significant and do they have the proper top down rank order?

And that, quoting from Section XVI above:

Adjusting for just the ENSO impacts via only MEI variables, NOT ONE of the Nine (9) Tropical temperature time series analyzed above were consistent with the EPA’s THS Hypothesis.

That is, adjusting for just the natural ENSO Impacts over their entire history; all tropical temperature data analyzed above have non-statistically significant trend slopes -which invalidates the THS theory.

In short, if on an-other-things-equal basis, CO2 in fact has had a Statistically Significant impact on tropical  temperatures, its impact has been offset by other Non ENSOrelated

Natural Variables over the past 55 plus years. In fact, some climate scientists effectively now claim that, while the THS apparently cannot be found in the trend slopes of the relevant empirical temperature data, the CO2-generated warming has to be hiding somewhere yet to be found. This “Missing Heat” subject has been boiling up for some time and this heat has so far

Nevertheless, alarmist scientists are still claiming record-setting warming in the Contiguous U.S. and globally caused by rising CO2 levels. If true, this CO2 -caused missing heat has to be warming the planet by a currently unknown mechanism operating somehow outside the tropics. Therefore, this analysis moved on to test this new, never formally claimed before, hypothesis by ENSO adjusting the relevant Temperature data.