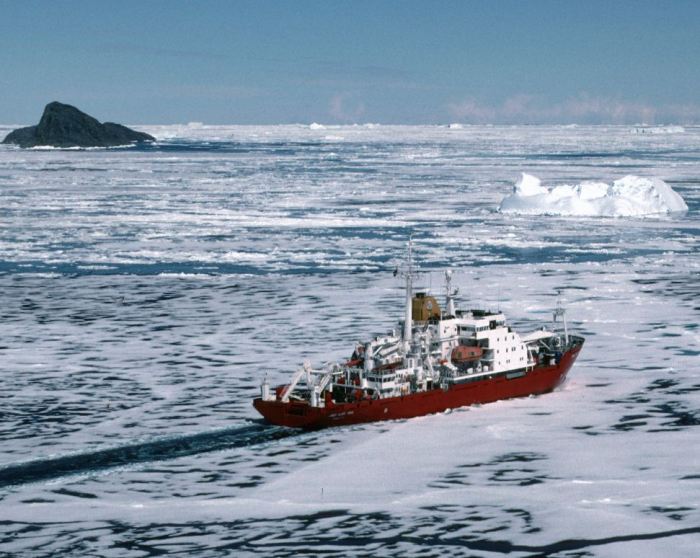 A new study suggests that large ocean going ships could help reduce global warming, by pouring surfactants into their wake, to extend the life of the shiny bubbles churned up by ship’s propellers.

… Crook and her co-authors maintain that their climate model shows the scheme could bring a 0.5-degree Celsius reduction in the Earth’s average surface temperature by 2069, helping to offset the 2-degree warming expected by then.

According to Crook, the effect is comparable to those achieved by other so-called geoengineering schemes that have been proposed in recent years.

Of course, those bubbles won’t resist popping just because we want them to. The scheme calls for the ocean-going ships to pump out a stream of chemicals known as surfactants as they move along. Surfactants help prevent popping by affecting the surface tension of water — at the same time making the wakes a bit whiter than they would be ordinarily.

But it’s not clear whether the scheme would be safe for marine life. And then there’s the matter of its effect on air quality.

“Previous research suggests surfactants reduce the amount of CO2 uptake by the ocean, which would mean by adding surfactant we might cause atmospheric CO2 to go up,” Crook said. “But by how much and whether the resulting warming from the extra CO2 would outweigh the increased albedo is unknown. This could be a show-stopper.” …

Solar radiation management schemes could potentially alleviate the impacts of global warming. One such scheme could be to brighten the surface of the ocean by increasing the albedo and areal extent of bubbles in the wakes of existing shipping. Here we show that ship wake bubble lifetimes would need to be extended from minutes to days, requiring the addition of surfactant, for ship wake area to be increased enough to have a significant forcing. We use a global climate model to simulate brightening the wakes of existing shipping by increasing wake albedo by 0.2 and increasing wake lifetime by ×1440. This yields a global mean radiative forcing of -0.9 ± 0.6 Wm-2 (-1.8 ± 0.9 Wm-2 in the Northern Hemisphere) and a 0.5 °C reduction of global mean surface temperature with greater cooling over land and in the Northern Hemisphere, partially offsetting greenhouse gas warming. Tropical precipitation shifts southwards but remains within current variability. The hemispheric forcing asymmetry of this scheme is due to the asymmetry in the distribution of existing shipping. If wake lifetime could reach ~3 months, the global mean radiative forcing could potentially reach -3 Wm-2. Increasing wake area through increasing bubble lifetime could result in a greater temperature reduction but regional precipitation would likely deviate further from current climatology as suggested by results from our uniform ocean albedo simulation. Alternatively, additional ships specifically for the purpose of geoengineering could be used to produce a larger and more hemispherically symmetrical forcing.

Pouring enough surfactant into the sea, to allow bubbles to survive for 10 days in open water, might kill a lot of sea life. Surfactants are often used in cleaning products, such as dish washing liquid, because they are very effective at breaking up organic matter.

222 thoughts on “Latest Green Idea: Pouring Millions of Tons of Bubble Mix into the Sea”