So, my gorgeous ex-fiancee says to me “Did you forget anything”? I sez, “If I did I don’t remember it!”, and we’re on the road again. House-sitters are sitting, and we’re back on the highway for a couple of weeks.

We’re heading for the Grand Canyon, by way of Lake Tahoe and Las Vegas. Like fools we decided to start our holiday on Labor Day Weekend, so the roads were jammed from the coast. California has been in drought conditions for a few years, but this time of year the coastal hills are always dry. Much of the land around where we live has been converted to wine grapes, and the conversion continues apace …

From the coastal hills we rolled across the great Central Valley of California. Most folks don’t know that it is one of the world’s major rice-producing areas … but man, is it flat. The recent forest fires around the state had the air so hazy that we couldn’t see the Sierra Nevada mountains until we were almost upon them. We were heading for a campground in Coloma, on the American river not far from where the first gold discovery in California was made in 1848. It turned out to be a lovely spot, right by the river.

In the morning, we drove about five miles to the site of Sutter’s Mill, where the gold discovery was made. It’s a beautiful location, and there is a museum and a re-creation of the sawmill. The mill itself was run by a paddlewheel set in a mill-race alongside the river, and it was while digging the mill-race that the gold was discovered.

As usual, the big losers in the deal were what I call the “Early Asian Immigrants”, the Indians who lived in the area. Within a couple of years, hundreds of thousands of gold-seekers flooded their lovely, peaceful valley, and their way of life basically came to an abrupt end. Another tragic encounter in the endless struggle between the early Asian immigrants and the later melanin-deficient immigrants. The Indians called gold “the yellow metal that makes white men crazy”, and they were right.

Some people tried to do right by the Indians … good luck with that. From a plaque at the Mill:

There is still some old machinery at the mill. I’m always amazed at how much our forebearers were able to do with so little. Here’s a funkadelic old stamping mill, for crushing the gold-bearing quartz for further processing.

A belt run by a water wheel turned the wooden wheel at the left. That turned the horizontal shaft, and the “dogs” on the shaft raised the hammers and let them drop.

All of this got me to thinking about the idea of finite resources. People think that a “resource” is some kind of mineral or metal in the ground. Not true. A resource is something which we can extract from the ground and use. So for the Indians, gold wasn’t a resource, as they had no use for it.

Now, I’ve read that one of the world’s largest gold deposits is around Napa, California, not far from where I live. But there are no gold mines there. Why not? Because it is widely dispersed “flour gold”, very fine gold which is difficult and expensive to extract.

Which brings up another oddity. At present, the flour gold around Napa is not a resource, because it would cost twice what it is currently worth to extract it. This means that the amount of a resource is a function of economics. And this is where the peak oilers always get tripped up. How much oil is there in the ground? Well … depends on what the current price per barrel might be. If the price per barrel were $10 there is very little oil in the ground. But if the price rises again to $100 per barrel, suddenly there are oil fields producing all over the place.

From Sutter’s Mill, we went over the summit of the Sierras, and on towards Lake Tahoe … where the main feature of the highway are the big dropoffs over the edge: 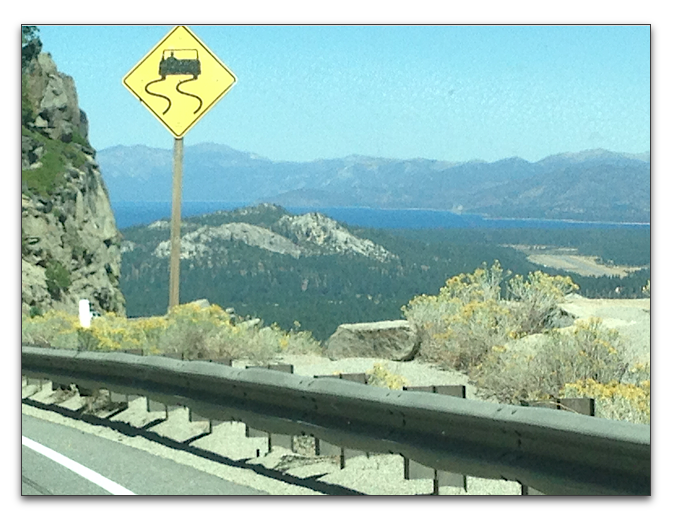 In Tahoe, we were invited to a concert on the beach by the Reno Jazz Band, along with a Sinatralike tribute singer. We picnicked on the beach in the afternoon, and that was lovely and warm.

But by the time the concert started the sun was setting and a frigid wind was blowing off of the lake.

The music was great, but I was glad to get back to a fireplace and a cup of coffee.

Today we went to Emerald Bay. It’s an ancient moraine lake with a narrow opening onto Lake Tahoe. The setting is amazing, and I fear my poor photo doesn’t do it justice. The smell of the forest around the lake is heady, almost overpowering at times. At Emerald Bay there is old-growth forest. Most of the forests around Lake Tahoe were cut down back in the day to provide shoring timbers for the silver mines in Virginia City, Nevada. But Emerald Bay was privately owned at the time, so it’s one of the few remaining virgin forests in the area, filled with giant cedars, Douglas firs, quaking aspen, and Ponderosa pines. The leaves of the aspen are so delicately balanced that the slightest wind sets them aflutter, sending silvery reflections through the woods … ah, dear friends, what a world we live in.

Tonight, there are fireworks on the lake. Having learned my lesson, I plan to wear just about every piece of clothing I brought. I’ll likely look like the Michelin Man, or even the Goodyear blimp, but I don’t care. I packed for the desert, dang it, not for cold nights … that’ll teach me.

I did find out some good news from the locals, though. It turns out that the Early Asian Immigrants have the last laugh. The casinos on the Nevada side of the lake are doing very poorly, because of the proliferation of Indian casinos siphoning off all of the gamblers money before they ever make it to Nevada … gotta say that there is some street justice in that.

Tomorrow, we’ll likely roll into Nevada, and camp somewhere by Tonopah. After that, Las Vegas, where the gorgeous ex-fiancee bought us presents of tickets to Cirque de Soleil. From there to the Grand Canyon, Flagstaff, and maybe further south.

As always, any suggestions of things to see and do are more than welcome. We’ll be returning through Death Valley, Bishop, and Yosemite. If anyone along the way wants to hoist a beer, I’ve got a temporary travel email address which is willis.eschenbach at yahoo [dot] com, so give us a shout.

More to come, and of course, I’ll do my best to stay up with the ongoing scientific dialogue.

98 thoughts on “Slip Slidin' Away”