China seems to be ground zero for air pollution these days. From NASA: 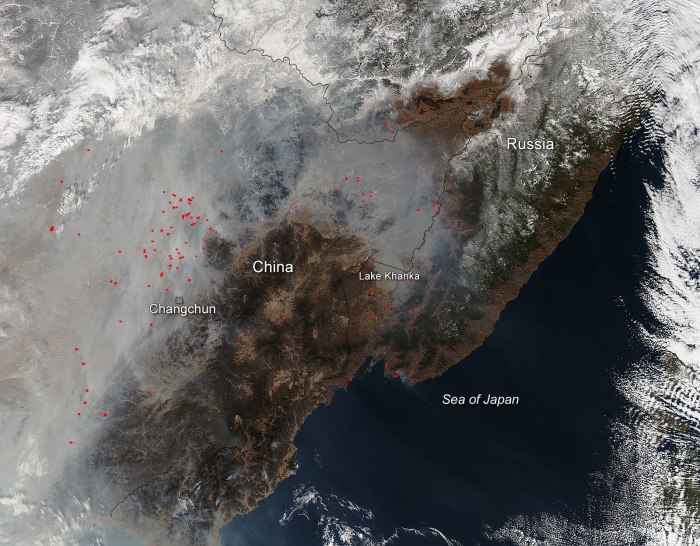 Smoke and haze hang over a large portion of eastern China in this image captured by the Aqua satellite on October 29, 2014.  China uses the method of “slash and burn” agriculture to rid their fields of leftover plants. Farmers often use fire to return nutrients to the soil and to clear the ground of unwanted plants. While fire helps enhance crops and grasses for pasture, the fires also produce smoke that degrades air quality as seen in this image.

The U.S. Consulate in Beijing records an air quality index of 226 for October 29 putting it in the “Very Unhealthy” region.  Furthermore the following precautions are noted, “Significant aggravation of heart or lung disease and premature mortality in persons with cardiopulmonary disease and the elderly; significant increase in respiratory effects in general population. Active children and adults, and people with respiratory disease, such as asthma, should avoid all outdoor exertion; everyone else, especially children, should limit outdoor exertion.”  Haze in this region tends to worsen in the fall and winter, when cold, heavy air traps pollutants near the surface.

The smoke released by any type of fire (forest, brush, crop, structure, tires, waste or wood burning) is a mixture of particles and chemicals produced by incomplete burning of carbon-containing materials. All smoke contains carbon monoxide, carbon dioxide and particulate matter (PM or soot).

This natural-color satellite image was collected by the Moderate Resolution Imaging Spectroradiometer (MODIS) aboard the Aqua satellite on October 29,  2014. Actively burning areas, detected by MODIS’s thermal bands, are outlined in red.

64 thoughts on “Satellite captures massive smoke and haze over china”