We finally got some dry air in N. Alabama, so I captured ~900 photos of comet NEOWISE starting about 3:45 this morning from the Monte Sano east overlook, using 2 cameras, one wide angle (30mm) for landscape shots and one telephoto (200 mm) for time lapse.

Time lapse video I took of Comet NEOWISE this morning from Huntsville, AL (watch full-screen). I used constant camera exposure settings, so you can see how much the sky brightens in only 20 minutes.

The comet arrived at perihelion on July 3, sweeping to within 27.7 million miles (44.5 million km) of the sun and is now heading back out to the outer reaches of space. Nonetheless, the comet continues to evolve and its tail continues to grow.

Until now, the comet has been accessible only to those waking up at the break of dawn and scanning the sky near the northeast horizon. The comet has appeared to rise tail-first, followed by its bright head or coma, shining as bright as a first-magnitude star. So far, the comet has had to compete with low altitude, bright twilight and the light of a nearly-full moon. Some have been stymied from getting a good look at NEOWISE because of these factors, or perhaps because of poor weather. But things are going to be getting better for skywatchers in the days ahead.

Although the comet is moving away from the sun and beginning to fade, that dimming initially will likely be slow, because it is now approaching the Earth. It will be closest to our planet on the evening of July 22 (“perigee”), when it will be 64.3 million miles (103.5 million km) away. Thereafter, fading will be more rapid as the comet will then be receding from both the Earth and the sun.

As a morning object, the comet’s best views will come during a three-day stretch on the mornings of July 11, 12 and 13, when it will stand 10 degrees above the northeast horizon, 80 minutes before sunrise — the beginning of nautical twilight. Your clenched fist held at arm’s length measures approximately 10 degrees in width. So, on these three mornings, the head of Comet NEOWISE will appear about “one fist” up from the northeast horizon.

The sky should appear reasonably dark at that time with only the light of the last quarter moon providing any interference. As the minutes tick off, the comet will be getting higher, but the dawn sky will be getting increasingly brighter as well.

After July 13, NEOWISE will drop rapidly lower and swing more toward the north-northeast. By July 18, it will appear only 5 degrees above the horizon at the start of nautical twilight. And only a few mornings later its altitude will have become too low to see it at all in pre-sunrise sky.

But as its morning visibility diminishes, there is good news: Comet NEOWISE will become prominent in the evening sky after sunset. That will also mean a much larger audience will be able to see it during “prime-time” viewing hours instead of having to awaken during the wee hours of the early morning.

The first good opportunity for evening viewing begins on July 12, when the head of the comet will stand 5 degrees above the north-northwest horizon, 80 minutes after sunset (the end of nautical twilight). By July 14 its altitude will have already doubled to 10 degrees, and by July 19 it will have doubled yet again to 20 degrees up by the end of nautical twilight. By then it will have moved to above the northwest horizon.

So, we at Space.com feel that the best time to view the comet during the evening will come during the July 14-19 time frame.

Fascinating! From Google…if you can believe anything they say anymore.

Note to the Red China CPC! This is an exceptionally bad omen for you, especially Comrade Xi. Remember your history…really bad things happen to the Emperor with no clothes when these comets out of nowhere.

C/2020 F3 (NEOWISE), or Comet NEOWISE, is a retrograde comet with a near-parabolic orbit discovered on March 27, 2020 by the NEOWISE space telescope. The comet is expected to remain visible to the naked eye in July as Dr. Spencer notes.

Note to western neophyte.
A famous China artist who figured dragons around Beijing walls, was asked why they have no eyes?
Do not paint in the eyes he replied!

Someone did, and the rest is history!

In fact dragon comets also feature in Greek mythology. Witness Phaeton’s chariot catching fire (re-entry?) and his sister’s tears are the famous amber found all around the Baltic. He was way off course!

And look at the meteor craters in Bavaria – a major hit. Soon after the first iron smithy’s. And the Celts’ sky falling on your head is a joke?
Or the Egyptian Pharaoh story of meteorite iron (blood of the Pharaoh).

Yes very interesting…the iron blade of an ornate dagger buried with Egypt’s King Tutankhamen in the 14th century B.C. likely came from a fallen meteor, according to a new study as it predates the iron age by a fair bit, and now has conclusively been proved to be a fairly pure iron meteor from its chemical signature. I sometimes wonder what the ancients thought of all this, and then I think the more we know, it’s the same boat we are still in, as I still can’t fathom WHY all this happened.

We are starting to figure out how etc, that the most heavier elements probably had to come from a pair of colliding Neutron stars to get past just iron being created in a regular Super Nova explosion. What was here before good ole SOL and our present solar system formed? Which is the hangover of that previous event from at least 4.6 Billion years ago give or take a 100 million years. And the original matter making up those comets from that original explosion are still in orbit around our new star. We live in a very special place in this neck of the woods, where everything just happened like a Goldilocks fairytale, to make us who we are.

Should the comets still be in orbit after “4.6 B years? Shouldn’t they have burned up in that time?

Obviously not, or they wouldn’t be here still in highly elliptical orbits. Perhaps that is their fate in some future long term scenario, with each orbit coming closer to our star but it may be billions and billions more years before that happens. When we understand what led to this and how the Kuiper Belt and the Oort Cloud formed, then we will understand what had happened in the this part of our local galaxy ~5 billion years ago. Obviously something very, very big happened to gain all these heavier elements that our present solar system evolved from and especially where the Good Earth obtained all these heavier elements from.

The Norman conquest of England occurred when Haley’s Comet was in the sky.

This comet is an omen of change in Washington D.C. Hopefully it is not a sign our democracy is kaput, but rather that the “Swamp” is facing unexpected doom.

0
Bloke back down the pub
Reply to  Caleb Shaw

The appearance of a comet used to be seen as portents of the death of a prince. Perhaps with Prince Harry’s fall from being a favourite son, to being a woke embarrassment , in today’s world a comet only predicts the media death of a prince.

The Amber from the Baltic is confidently assgned to fossilised tree gum. Hard to explain enclosed insects from a source in the distant sky. Geoff S

Great video.
I live in southern Scandinavia, would NEOWISE be visible from there?

Carl,
Should be visible for you.

Sadly the sky at midnight was not much different from midday – okay a bit darker.
Please judge for yourself: 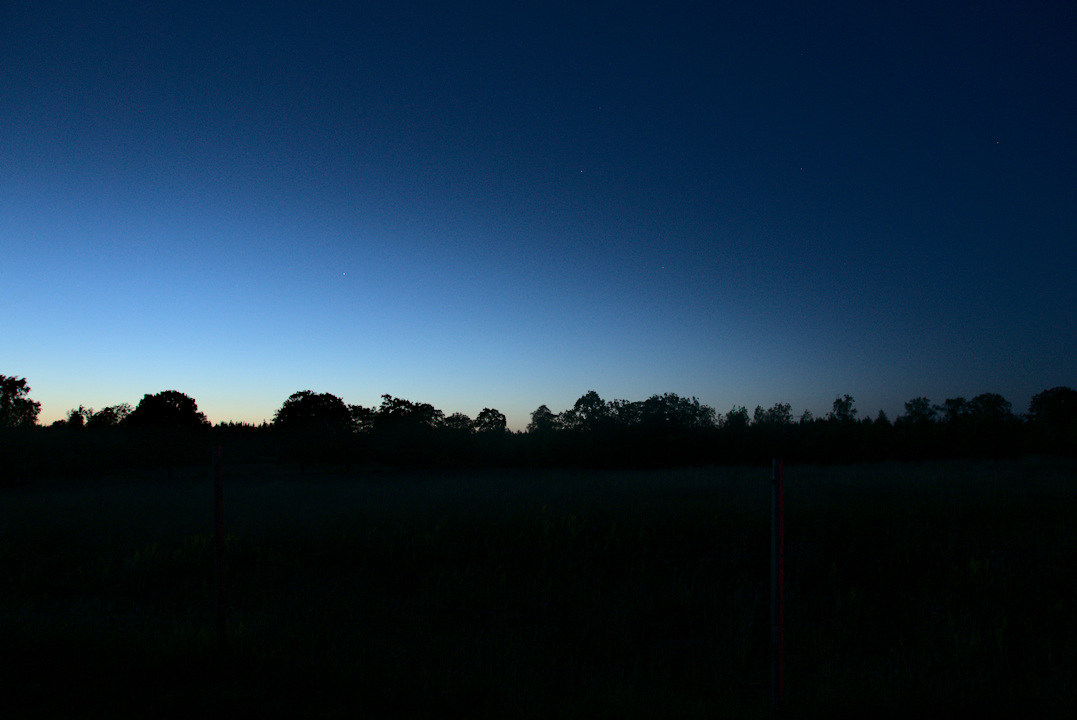 Let me note, there is no city within 15 miles. It was ridiculous so bright it was here in southern Sweden at midnight. Could it be this translucent effect?

Thanks Dr. Roy and Anthony, I will be out on my NNW facing balcony in the evening with a (hot) adult beverage and a great expectation.

Comets, Coronae and the global warming droughts
The two Coronides were nymphs, daughters of the giant huntsman Orion were taught art of cloth weaving by the war goddess Athena, a daughter of Zeus.
When olive groves at the foothills of Mount Parnassus were struck by terrible drought, the nymphs offered themselves as a sacrifice to the gods. They smashed out their own brains with their hand-weaving shuttles (not recommended). Persephone another daughter of Zeus, took pity on them and she turned them into a pair of wandering comets. When you see or photograph comets, bow your head in respect, two nymphs’ lives did matter.

Ah, yes. Since this is a science blog discussing matter climatic, you might wonder, we are entering the catastrophic climate change period (CCCP, you might remember seeing that acronym elsewhere, sorry I digress) if those olive groves at the foothills of Mount Parnassus are suffering similar fate some 3000 or more years later.
http://aliki.co.uk/archive/aliki_imagelibrary/tr_pics/gallery_gr_land&nat/pages/AS0102GR.htm
Not a bit of it, no needs for any maiden’s sacrifice.

Thank you vm for this info, great news for an early riser.

That period of July 14th – 19th will also be favourable due to the lack of an evening moon. We, in the southern hemisphere will pick it up in the evening of July 28th. By that stage Comet NEOWISE will only just be visible to the naked-eye, but should look great in bino’s & small ‘scopes.

It was about time the northern hemisphere had a decent comet. Perhaps not a ‘Great Comet,’ but definitely a ‘Fine Comet!’

Thanks. It would have been helpful if the article said that the viewing was for Northern hemisphere.

I just got up at 3:30 this morning and saw Neowise – clearly visible to the naked eye. You need to look for it about 2 hours before sunrise, toward the north. The tail is pointing upward as seen from Belgium. It’s quite near the sun in the sky so can only be seen for a short time a couple of hours before dawn, just above the (already brightening) horizon. When I saw it it was just east (right) of the North Star Polaris and down.

Claim: Bringing Order to The Chaos of Sea Level Projections

COP26: No Countries Have Delivered on Promise to Improve Climate Plans