This story has legs now, as I predicted in this piece yesterday “The ‘RICO 20 letter’ to Obama asking for prosecution of climate skeptics disappears from Shukla’s IGES website amid financial concerns” the Streisand Effect has been unleashed. Now, instead of explaining why the RICO 20 letter was mysteriously withdrawn from the IGES website after questions began to be asked about the millions of dollars that George Mason’s Jagadish Shukla apparently has received, some of it while apparently “double dipping” against university policy, all the while claiming climate skeptics are the recipients of money that should be prosecuted under the RICO act, we find this curious missive posted in place of the RICO20 letter at the URL where it previously resided:

“Inadvertently placed on this web site”? I think not, especially since that URL was the “go to” given in their press release about the letter and referenced in numerous news outlets, without so much as a peep of a correction for over a month while that story ran wild. All of the sudden it was posted in the wrong place?

I call that explanation “BS of the highest order”. He got caught with his pants down, tables have turned, and now its damage control, and badly done damage control at that, since the actions are making the situation with Shukla even more suspect.

Then there’s the apparent nepotism going on with all that public money used to fund Shukla’s climate dreams:

Assistant to the President Shukla, Sonia

And, Steve McIntyre had called out one of the signatories, Barry Klinger, over untrue claims in Reckless Misinformation from Barry Klinger and the RICO 20

Klinger has now started a climbdown, screencap of http://mason.gmu.edu/~bklinger/ricoDebate.html below: 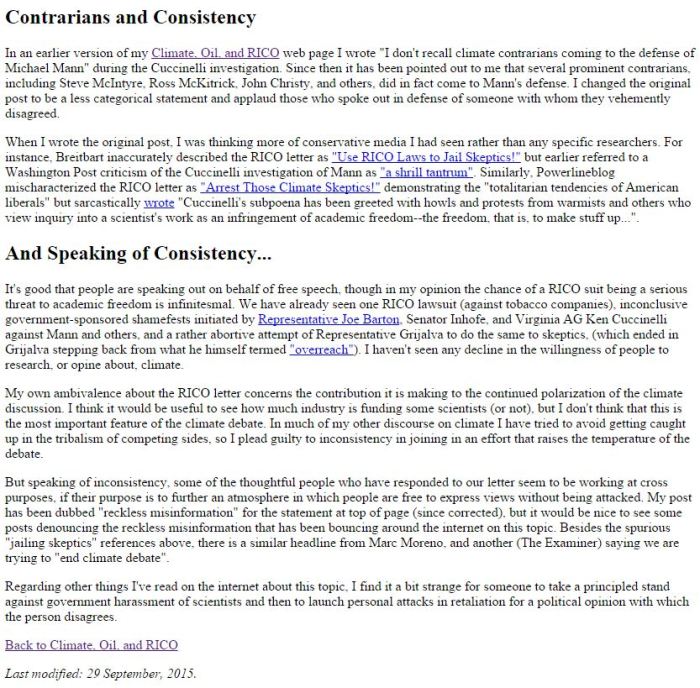 Popcorn futures are climbing, and this episode, along with all the many many “follow the money” tentacles it has, may very well become the takedown of organized climate science. The RICO20 has opened a Pandora’s box upon themselves.

Note: shortly after publication this article was edited to include a missing comma, a misplaced “to” instead of “the”,  and to fix a text formatting problem

139 thoughts on “Backfire on the #RICO20 and Jagadish Shukla is imminent; wagon circling, climbdown, dissolution begins”