So far this year several storms have come to life in the Atlantic, and then fade as wind shear tears them apart. A newly published study by Klotzbach, Gray, and Fogarty suggests we should get used to this. 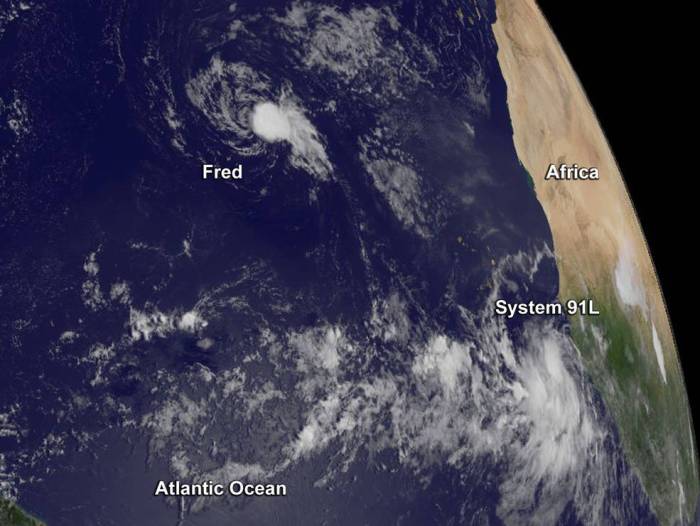 This visible image of the Eastern Atlantic Ocean on Sept. 4 at 7:45 a.m. EDT shows Tropical Depression Fred winding down and another low pressure area that just came off the West African coast. Credits: NASA/NOAA GOES Project

From NASA Goddard:  The Eastern Atlantic Ocean continues to generate storms, and as satellites are watch Tropical Storm Fred fade over the next couple of days, a new area of low pressure has moved off the coast of western Africa.

A visible image of the Eastern Atlantic Ocean on Sept. 4 at 7:45 a.m. EDT showed Tropical Depression Fred as a tight swirl of low clouds, with clouds and storms only southeast of the center. The GOES image also showed the new low pressure area called System 91L just off the coast of western Africa. The GOES image was created by the NASA/NOAA GOES Project at NASA’s Goddard Space Flight Center in Greenbelt, Maryland.

At 11 a.m. EDT (1500 UTC), the center of Tropical Depression Fred was located near latitude 22.3 North and longitude 38.3 West. That puts the center of Fred about 1,275 miles (2,050 km) southwest of the Azores islands. Fred was moving toward the west-northwest near 9 mph (15 kph), and is expected to turn toward the northwest by early on September 6. The estimated minimum central pressure is 1006 millibars.

Maximum sustained winds are near 35 mph (55 kph), and is expected to weaken to a remnant low pressure area by September 5 because it is in an area of strong upper-level winds.

Another System Developing Behind Fred

To the southeast of Fred, another area of low pressure in a tropical wave designated System 91L, had moved off the coast of western Africa. At 0600 UTC (2 a.m. EDT) the center of System 91L was located near 10.7 North latitude and 18.1 West longitude, a couple of hundred miles off the west coast of Africa. System 91L is expected to move south of the Cape Verde Islands late on September 4 and 5.

The National Hurricane Center (NHC) noted that the low continues to show signs of organization and has the potential for some development as it moves westward at 15 to 20 mph across the tropical Atlantic during the next few days. NHC gives System 91L a 40 percent chance to develop in the next two days and 60 percent chance in five days.

So, forecasters will watch as Fred fizzles and 91L ramps up over the next several days.

A new but controversial study asks if an end is coming to the busy Atlantic hurricane seasons of recent decades.

The Atlantic looks like it is entering in to a new quieter cycle of storm activity, like in the 1970s and 1980s, two prominent hurricane researchers wrote Monday in the journal Nature Geoscience.

Scientists at Colorado State University, including the professor who pioneered hurricane seasonal prognostication, say they are seeing a localized cooling and salinity level drop in the North Atlantic near Greenland. Those conditions, they theorize, change local weather and ocean patterns and form an on-again, off-again cycle in hurricane activity that they trace back to the late 1800s.

Warmer saltier produces periods of more and stronger storms followed by cooler less salty water triggering a similar period of fewer and weaker hurricanes, the scientists say. The periods last about 25 years, sometimes more, sometimes less. The busy cycle that just ended was one of the shorter ones, perhaps because it was so strong that it ran out of energy, said study lead author Phil Klotzbach.

Klotzbach said since about 2012 there’s been more localized cooling in the key area and less salt, suggesting a new, quieter period. But Klotzbach said it is too soon to be certain that one has begun.

Here is the correspondence in NatGeo 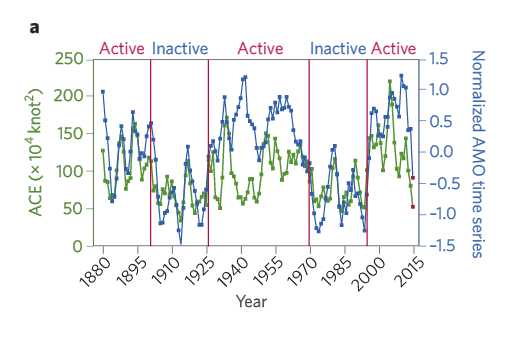 Analyses of Atlantic multidecadal variability. a, Three-year-averaged ACE (green line) and three-year-averaged standardized normalized AMO (blueline) from 1880–2014 with predicted value for 2015 (red squares). The 2015 AMO value is the January–June-averaged value. The year listed is the third year being averaged (for example, 1880is the 1878–1880 average). Correlation between the two time series is 0.61.

Alternatively, it could be primarily driven by alterations in levels of sulfate aerosols5. We argue that the weight of the evidence points towards natural oceanic variability being the principal driver of the AMO1,4,6. The AMO phase was classified as being positive from 1878–1899, 1926–1969and 1995–2012, and negative from 1900–1925and 1970–19942. Positive AMO phases are characterized by above-average far North and tropical Atlantic SSTs, below-average tropical Atlantic sea level pressures (SLPs), and reduced levels of tropical Atlantic vertical wind shear. All three of these conditions are known to create a more favourable environment for Atlantic hurricane formation and intensification1.Following an active 2012 Atlantic hurricane season, most predictions indicated another active season in 20137. A strong temporary weakening of the AMO was observed during 20138, which may have been one of the reasons for the season being quieter than expected. Activity during the 2014 hurricane season was also below normal. The combined ACE of 103 × 104knot2 registered in 2013–2014was the lowest value that had been recorded since the ACE of 71 × 104knot2 in 1993–1994.

And following this marked reduction in activity over the past two years, a below-average season is now expected for 20159. Random resampling of three-year periods of positive AMO phase gives a 1% chance of an ACE of 155 × 104knot2 or lower during the positive AMO phase. It is therefore unlikely, if 2015 turns out to be as quiet as predicted, that we are in a positive AMO phase. Borderline weak El Niño conditions in 2014and strong ElNiño conditions predicted for this year’s hurricane season may, however, also have contributed to observed below-average hurricane activity in 2014and predicted below-average hurricane activity in 2015. A proxy using a combination of North Atlantic SSTs from 50–60°N, 50–10°W and SLPs from 0–50°N, 70–10°W has been utilized to monitor the strength of the AMO in real time10. When the AMO is positive, SSTs in the far North Atlantic tend to be warmer, while SLPs throughout the tropics and subtropics tend to be lower2. This index has decreased since 2012 (Fig.1a): SST anomalies in the tropical and far North Atlantic have become cooler and SLP anomalies throughout most of the Atlantic have increased. The decrease in far North Atlantic SSTs in the past three years has been associated with a weaker thermohaline circulation6. Annual mean SSTs in the North Atlantic have cooled in 2013and 2014 compared with values averaged from 1995to 2012 (Fig.1b). During the most recent 25 positive AMO years (1963–1969and 1995–2012), 204.5major hurricane days (MHD) were observed in the Atlantic, compared with 63.25 during the most recent 25 negative AMO years (1970–1994), a ratio of 3.2to 1. Marked differences are also observed in tropical cyclone tracks in the deep tropics between the positive versus negative AMO phase (Fig.1c). For example, in the Caribbean (south of 20°N, west of 60°W), 16.25MHD occurred during the most recent….