I’m a bit skeptical of this claim, “Satellite images reveal ocean acidification from space” but it may be mostly due to how the press release is written, for example, nowhere is the term pH used in the press release, though it is in the abstract. Curiously, the caption for the graphic provided with the press release says it is “total ocean alkalinity from space” which is actually correct, since the ocean pH is not below 7.0, and not acidic, it is simply less alkaline. Then there’s the statement “The new techniques use satellite mounted thermal cameras to measure ocean temperature while microwave sensors measure the salinity.” This makes the measurement appear more like a proxy for OA than direct measurement. Dr. Roy Spencer comments on this and the technology below. 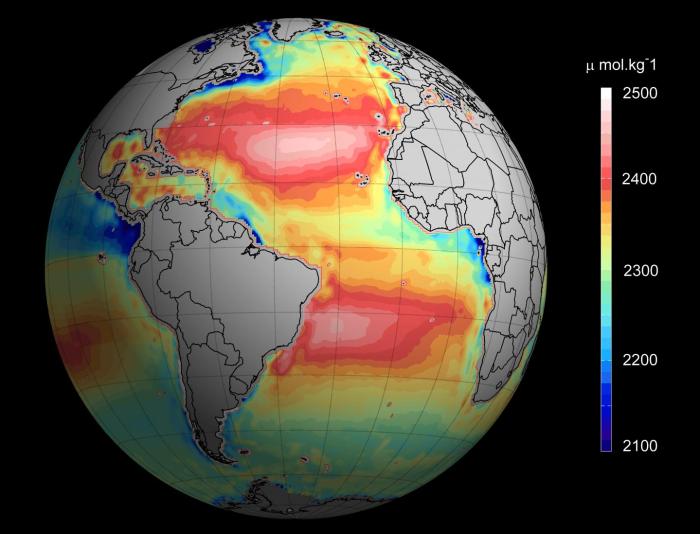 From the University of Exeter:

Pioneering techniques that use satellites to monitor ocean acidification are set to revolutionize the way that marine biologists and climate scientists study the ocean.

This new approach, which will be published on the 17 February 2015 in the journal Environmental Science and Technology, offers remote monitoring of large swathes of inaccessible ocean from satellites that orbit the Earth some 700 km above our heads.

Each year more than a quarter of global CO2 emissions from burning fossil fuels and cement production are taken up by the Earth’s oceans. This process turns the seawater more acidic, making it more difficult for some marine life to live. Rising CO2 emissions, and the increasing acidity of seawater over the next century, has the potential to devastate some marine ecosystems, a food resource on which we rely, and so careful monitoring of changes in ocean acidity is crucial.

Researchers at the University of Exeter, Plymouth Marine Laboratory, Institut français de recherche pour l’exploitation de la mer (Ifremer), the European Space Agency and a team of international collaborators are developing new methods that allow them to monitor the acidity of the oceans from space.

Dr Jamie Shutler from the University of Exeter who is leading the research said: “Satellites are likely to become increasingly important for the monitoring of ocean acidification, especially in remote and often dangerous waters like the Arctic. It can be both difficult and expensive to take year-round direct measurements in such inaccessible locations. We are pioneering these techniques so that we can monitor large areas of the Earth’s oceans allowing us to quickly and easily identify those areas most at risk from the increasing acidification.”

Current methods of measuring temperature and salinity to determine acidity are restricted to in situ instruments and measurements taken from research vessels. This approach limits the sampling to small areas of the ocean, as research vessels are very expensive to run and operate.

The new techniques use satellite mounted thermal cameras to measure ocean temperature while microwave sensors measure the salinity. Together these measurements can be used to assess ocean acidification more quickly and over much larger areas than has been possible before.

Dr Peter Land from Plymouth Marine Laboratory who is lead author of the paper said: “In recent years, great advances have been made in the global provision of satellite and in situ data. It is now time to evaluate how to make the most of these new data sources to help us monitor ocean acidification, and to establish where satellite data can make the best contribution.”

The research is published in the scientific journal Environmental Science and Technology.

Approximately a quarter of the carbon dioxide (CO2) that we emit into the atmosphere is absorbed by the ocean. This oceanic uptake of CO2 leads to a change in marine carbonate chemistry resulting in a decrease of seawater pH and carbonate ion concentration, a process commonly called “Ocean Acidification”. Salinity data are key for assessing the marine carbonate system, and new space-based salinity measurements will enable the development of novel space-based ocean acidification assessment. Recent studies have highlighted the need to develop new in situ technology for monitoring ocean acidification, but the potential capabilities of space-based measurements remain largely untapped. Routine measurements from space can provide quasi-synoptic, reproducible data for investigating processes on global scales; they may also be the most efficient way to monitor the ocean surface. As the carbon cycle is dominantly controlled by the balance between the biological and solubility carbon pumps, innovative methods to exploit existing satellite sea surface temperature and ocean color, and new satellite sea surface salinity measurements, are needed and will enable frequent assessment of ocean acidification parameters over large spatial scales.

Dr. Roy Spencer, a remote sensing specialist himself, comments to me via email:

The technique for measuring salinity with low-frequency microwave

measurements is nothing new, although we haven’t had satellites to do it

globally until relatively recently.  But I’m not aware of how you get pH

from salinity and temperature…never heard of that before.

I did find this paper on satellite instrumentation designed to measure salinity:

So if they are using temperature and salinity to come up with pH, how can they determine that the “ocean acidification” they claim in the PR is truly a function of dissolved CO2, and not just part of the normal regional and seasonal salinity pattern? That concern is backed up by one of the images in a photo collage they present with the paper, which shows what seems to be a salinity image from the Aquarius instrument, note the arrow: 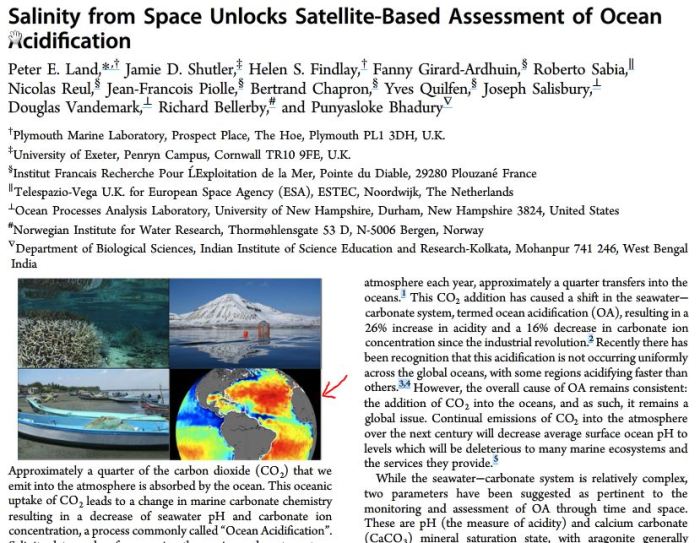 I found NASA’s press release on the first full year of salinity measurements using the Aquarius instrument and an interesting image similar to what is presented in the Land et al. press release.

Putting that image next to the one they provide with the press release suggests they are simply measuring a a dominant effect of seasonal and regional salinity variation, and not CO2 driven “ocean acidification”:

Note how similar the ocean regional patterns are. NASA writes of the salinity image:

One of the features that stand out most clearly is a large patch of highly saline water across the North Atlantic. This area, the saltiest anywhere in the open ocean, is analogous to deserts on land, where little rainfall and a lot of evaporation occur. A NASA-funded expedition, the Salinity Processes in the Upper Ocean Regional Study (SPURS), traveled to the North Atlantic’s saltiest spot to analyze the causes behind this high salt concentration and to validate Aquarius measurements.

And more importantly, how did Land et al. (2015) calibrate the proxy for pH? Have they sent ships to do in situ sampling as NASA did? There seems to be no mention of it…except that calibration of their algorithms is sorely needed. From page 3 of the paper: 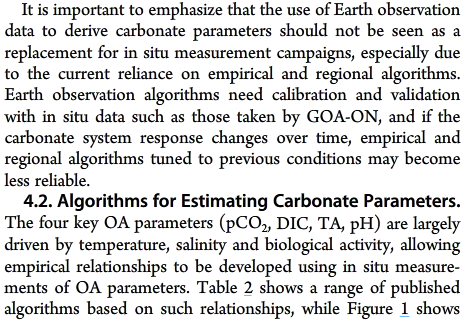 Wow. Their own paper emphasizes the need for in situ measurement, and that the algorithms aren’t calibrated.

Sadly, this press release seems to fit the hype pattern discussed yesterday: From #AAAS Why Some (Many?) Scientists Tend to Hype their Findings